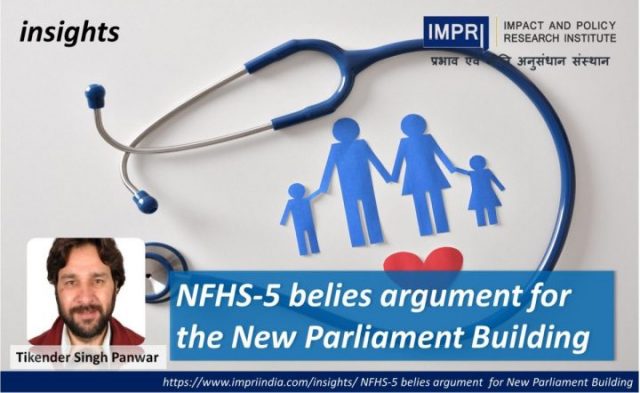 This was absolutely false and with numerous presentations made by different groups, it was suggested that no additional space is required for the increase in the number of parliamentarians.

Now with the NFHS- 5 out, it is clear that the population of India is stabilising. Though a clearer picture would emerge from the population census which would be out in a year. According to a report in a national daily: “A state-wise breakup of the NFHS data also show that India is on its way to stabilising its population, with most states and UTs having a total fertility rate(TFR) of less than 2.1, or a woman on average bearing two children over a lifetime, suggests that an existing generation of a people will be exactly replaced.”

This suggests that there will be an eventual decline in population over time.  Some of the states are witnessing negative growth. The southern states have a TFR less than 2.0. Kerala and Tamil Nadu – 1.8; Karnataka-1.7, Andhra-1.7, Telangana-1.8, Goa-1.3, Maharashtra-1.7, Chattisgarh-1.8, Odisha-1.8. Even other states like West Bengal have a TFR of 1.6, Madhya Pradesh-2.0, Gujarat-1.9, Himachal-1.7, Punjab-1.6. Uttar Pradesh – 2.4, Bihar 3.0. This shows that most of the states are going to experience negative growth in their population. Some of the most populous states like UP and Bihar have a higher TFR, but they too show a decline since the previous survey.

Now let us see what Hardeep Puri has been arguing all through the period whilst pushing for the new parliament building. The minister and his government have been arguing that the delimitation exercise will take place in 2026 and the required number of seats in the parliament comprising Lok Sabha and Rajya Sabha will be more than 1200, almost 500 more than the existing number. The rationale behind this argument is that there is a growing population and the needs of the change in demography must be adhered to.

So, if a rising population is not the principal reason for the construction of the new building, then why is it that the Modi government is pushing for this new parliament building so desperately? There are many reasons from obscurantism to leaving an imprint in the history of the “Modi era”. However, one of the hidden reasons and which is considered to be another salvo of prime minister Modi is to polarise and widen the gap between the north and south.

As mentioned above most of the southern states who have done extremely well in controlling their population and have brought down the fertility rate below 2.0 will get a lesser representation in parliament in comparison to those who have a higher TFR. The BJP intends to consolidate the Hindi heartland by increasing the total number of seats in the parliament from these states and brew another contradiction.

According to India in Pixels a projection of the 2026 delimitation exercise would mean a big loss to the better performing states and a big gain to the states who have a rising population based on the 2011 census.

If this exercise is done, it will be completely disproportional. This will undermine the federal structure of the constitution and shall further create a gap between the states. The BJP which is known for brewing contradictions on the basis of religion, communities, region has this new arsenal of polarising the people on the basis of their geographical locations i.e., the states where they belong to.

Construction of the new parliament building is not just building a new empire, “Modi Shahar”, but is also keeping in mind the larger picture of further dividing the country on a regional basis and ensuring a longer stay in power.