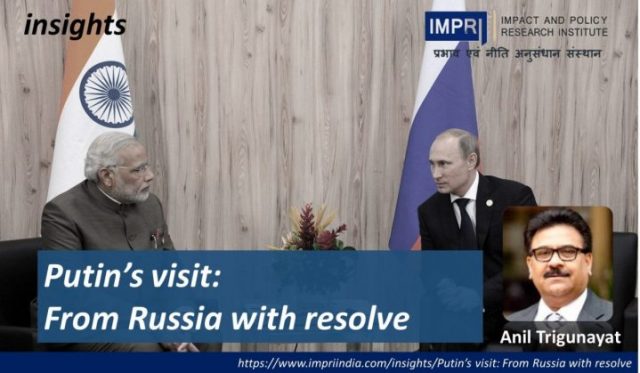 Over two decades ago President Putin along with the then Indian PM Vajpayee had instituted this vital mechanism that had steered the bilateral relationship into a special and privileged strategic partnership.

At the invitation of PM Narendra Modi the Russian President Vladimir Putin will be visiting New Delhi for the Annual Summit on December 6. Over two decades ago President Putin along with the then Indian PM Vajpayee had instituted this vital mechanism that had steered the bilateral relationship into a special and privileged strategic partnership. I happened to be a small part of that vision and have witnessed the relationship continuing on a sturdy path despite the global and regional geopolitical and geo economic challenges.

In today’s world, any bilateral relationship will ipso facto be subjected to the vagaries of the superpower rivalries as was the case even more so during the previous Cold War era when broadly hot wars were avoided and cold peace ensured. But today’s politico strategic containment has subsumed an acute economic competition making it even more virulent.

Sino-US and US-Russia rivalry and internecine competition are defining the matrix of the current global disorder and limit the contours of strategic autonomy for countries like India which wish to follow a reasonable national interest-driven foreign policy. In such a scenario it is obvious that Moscow-Delhi will have to navigate their own bilateral turf with even greater resolve and innovation.

There are detractors galore for the proximate Indo-Russian ties and often sound the bugle of gloom on the way forward without examining the solid strategic foundation and vast expanse of multidimensional engagement across a critical spectrum and mutually sustaining trust ranging from G2G to P2P levels which is not common in many other external relationships of India…Hence, when PM Modi calls Russia a time-tested friend he merely states the obvious.

He and President Putin share an exceptional personal chemistry that helps iron out any wrinkles over time which is expected in this fast-changing world and shifting theatres of geo-political competition. The two leaders have developed an informal summit mechanism as and when needed and have spoken a number of times.

PM Modi’s last visit to Sochi and the one on one discussion for an unusually long period with Putin is a testament to the multilateral worldview they share and the new areas for geo-economic quest they are considering be it in the Russian Far East with India’s $1 bn line of credit , Chennai Vladivostok Corridor or for that matter cooperation in hydrocarbons , defence ,nuclear energy , space and counter terrorism and narco-trafficking especially in the context of Afghanistan’s stability and onset of Taliban that will be discussed .

It is worth recalling that at the recent UNSC meeting on Maritime Security under India’s chairmanship, with PM Modi presiding over it , President Putin made it a point to be present and was the only Head of State .

India is keen to move into an institutional arrangement with the Russia led Eurasian Economic Union while they collaborate in BRICS , RIC and SCO among others . A fresh energy and impetus in the North-South Transport corridor (INSTC) with inclusion of Chabahar port is expected during the discussions as connectivity with Central Asia remains in focus .Of course, the fact that India despite US objections and threats of CAATSA has gone ahead with the S-400 Russian Triumf air defence system (upgradable to S500….) and the Russians continuing to supply it despite Chinese reservations speaks volumes of the contents of the special and privileged partnership.

Ajay Bhatt MoS Defense claimed in the Parliament only this week that S 400 is a potent system in terms of its operational capability to a very large area . India’s own interests and defence considerations have to take precedence over semantic concerns of certain countries and threats of sanctions. Cyber and intelligence cooperation and next stage collaboration in advanced weapons systems will be discussed as the Russian Ambassador indicated .

Moreover, Pandemic and vaccine production have emerged as a major area of collaboration between the two countries with regard to the Russian sputnik vaccine as India emerges into a reliable and resilient global vaccine and pharma supply chain.

On the regional front Af-Pak remains a major area of concern for both sides . While Moscow has gone closer to Beijing under pressure from Washington and under persuasion from Beijing towards Islamabad to keep its own strategic autonomy functional, the existing strategic cooperation with New Delhi provides it a major plus.

Of course Moscow prefers calming issues between India and China and does help in that it also understands that the unbridled Chinese ambitions are not only limited to keeping India consigned to South Asia but eventually could even have an impact on Russian maneuverability and her global power status. Even with the US, New Delhi could be a trusted interlocutor should the two sides choose to take that route. That is where India provides Moscow a historic leverage.

No relationship is perfect and India -Russia are no exception. We are living in a world in a flux where sloganeering of a Bhai-Bhai kind will provide little comfort and is simply extraneous . We need to acknowledge and confront the ground realities driven by national interests and common convergences and perceptions and appreciation of each other’s compulsions .Russia is still not convinced of India’s inclusivity driven position on Indo -pacific especially as the US objectives to contain China or confront its hegemony in the new region of contestation are crystal clear .

Hopefully the 2+2 meet of Foreign and Defence Ministers will enable a better understanding while devising common grounds of cooperation on the basis of realistic expectation. Moscow will need to have an open mind as New Delhi wants it to play a constructive role in the region too. It should also be appreciated that if we are talking of a multipolar world, big powers like India will have to have stakes and interactions with all super powers . Competition for exclusivity and loyalty is implicit in the alliance structures therefore India prefers to follow a strategic autonomy route while de-hyphenating various bilateral relationships .

Therefore, India has to begin to speak from the position of strength given her market size and defence pie and youth dividend which needs to be leveraged to her own advantage as she practices ‘Vasudhaiv Kutumabakam’ in her international discourse. Same ipso facto applies to the US which is her comprehensive global strategic partner. After all, strategic partnership is neither a fashion statement nor a one way street.

A few days before his visit ,at the presentation of credentials by the new Indian Ambassador , President Putin put his vision of India-Russia relationship in perspective “ This partnership brings real mutual benefits to both states . We will outline new large scale initiatives for the further development of special Russian Indian strategic partnership during the visit. India is one of the authoritative centers of a multi-polar with a foreign policy philosophy that is closely aligned with our own and we will continue to work together to expand the full range of Russian –Indian ties”.

Likewise, the Ministry of External Affairs expects the leaders to review the stat and prospects of bilateral relations and discuss ways to further strengthen the strategic partnership between the two countries while exchanging views on regional, multilateral and international issues of mutual concern . Much can be done and more must be done to realize the fullest potential especially in the business and geo economic domain through greater participation of trade and industry on both sides even as the G2G projects go on satisfactorily and more may be announced during the visit.

Read another piece on Quad titled “Trigs on Track- Diplomacy Unwound-AUKUS – The QUAD and the Malabar” in IMPRI insights.

Read another piece on Indo – Pacific titled “Trigs on Track- Diplomacy Unwound-AUKUS – The QUAD and the Malabar” In IMPRI insights.

Read another piece on Syria ” India Needs to Become a Player in Syria’s Transition and Reconstruction ” in IMPRI insights.