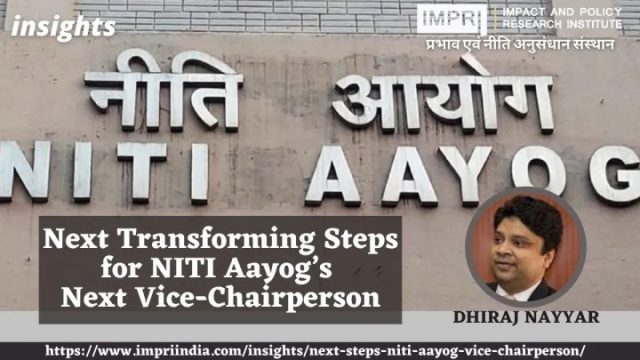 The Government of India’s NITI Aayog has got its third Vice Chairman in the eighth year of its existence. On 1 May, economist Suman K. Bery will replace economist Rajiv Kumar, who has been at the helm of the Aayog since September 2017. Interestingly, it has had fewer CEOs. Incumbent Amitabh Kant is only the second CEO of the Aayog, more than six years into his tenure, after the brief one-year stint of Sindhushree Khullar who had carried on from the erstwhile Planning Commission. What does the latest appointment mean for the Aayog which continues to strive to forge a clear identity and role for itself?

Prime Minister Narendra Modi was absolutely right in abolishing the Planning Commission. It was a relic of the pre-1991 socialist era and had already lived for a quarter of a century beyond its expiry date. Ironically, in its final 10 years, it was chaired by PM Manmohan Singh with Montek Singh Ahluwalia as Deputy Chairman, two men who were closely associated with India’s break from its pre-1991 economic policies and move towards market-oriented policies. The time for five-year plans and for dictating how states would spend their resources, the two main tasks of the Planning Commission were long over. In fact, its existence had become counter-productive with states and central ministries resenting its power to interfere in well-made strategies.

The new NITI Aayog formed several months after the announcement of the abolition of the Planning Commission was fashioned as a policy think-tank for the Government and a facilitator/supporter of the efforts of the states in their development. By merging the Independent Evaluation Office with the Aayog, it would also have a role in monitoring and evaluating the implementation of government schemes. But, because the structure and personnel were inherited, its nature and capabilities did not transform as per the new mandate.

If anything, the capabilities were reduced because the substantial middle-level staff was transferred out in an attempt to downsize. At the cutting-edge Adviser (Joint Secretary) level, almost everyone was a career civil servant more attuned to exercising power and authority than building intellectual capital or playing the role of technical support specialists. The monitoring and evaluation role can never be performed well by career civil servants since they have little interest in enforcing accountability on fellow civil servants in ministries, and also because a position in a ministry is their personal goal more often than not.

It is because the structure and human resources of the organization are not a good fit for its mandate that the institution has seemed to float without a clear purpose. Some corrections have taken place. Lateral entry, which should have formed the backbone of the institution from the start, has gained some momentum but mostly at levels below the Adviser/Joint Secretary. The biggest external recruitments are of Young Professionals, who do not threaten the power and authority of anyone in the system. However, with just a year of experience after a Master’s degree, they cannot provide the intellectual capital necessary for an important organ of Government.

When the Aayog has done very well, it is because the Prime Minister’s Office (PMO) has handed it particular tasks, like the Aspirational Districts Programme for example. Or because its dynamic, reform-minded CEO, Amitabh Kant, has deployed his own, considerable powers of persuasion to push crucial policy measures, like asset monetization for example. Other individuals have also exercised influence, like Member V.K. Paul in the domain of health but largely because of their own stature, not because of the weight of the institution.

As India comes out of Covid and adjusts to the reality of war in Europe, there is a need for an institution in Government which can think long and think deep, not plan but strategise. Suman Bery had a long and distinguished stint heading the Delhi-based think tank, NCAER and was later Chief Economist of Shell where he was part of the scenarios group involved in thinking about, and advising the management, on the future. He should not get bogged down in routine administrative matters and instead focus on building the intellectual capacity of NITI Aayog. By yet again appointing an economist and not a politician to a Cabinet-level post, the PM has signalled that he wants NITI to be a capable and professional think tank with policy expertise. NITI has an important role to play in transforming India, but it also needs to transform itself.

First published in Sunday Guardian Live, What NITI’s new boss must do, on April 25, 2022.

Read more by Dhiraj Nayyar at IMPRI Insights on Let us put the best FTAs forward.

Watch Dhiraj Nayyar on The Pandemic Era and Union Budget 2022-23.