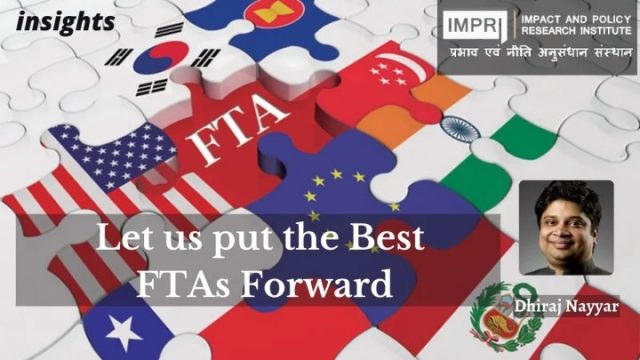 A frequent criticism by economists of the Narendra Modi government relates to its policies on trade – that post-2014, India has made a protectionist turn after almost a quarter-century of consistent trade liberalization. GoI’s decision to stay out of the Regional Comprehensive Economic Partnership (RCEP) at the last minute, its desire to revisit some free trade agreements (FTAs) signed earlier, and its explicit exhortation of Aatmanirbhar Bharat is cited as proof of a damaging, inward-looking trend reminiscent of the pre-1991 era.

Hopefully, the interim FTA signed with Australia will dispel that false notion. GoI is not averse to trade. Instead, it is inclined to take a strategic view, rather than adhere to textbook free trade. Indeed, that is what most successful countries practice.

The rationale for tariff liberalization after 1991 was perfectly sound. India had created a whole set of uncompetitive industries behind high walls of trade protection. Rightly, it was believed that only a weaning away of protection would spur the industry to become globally competitive. However, there are other factors that determine the cost competitiveness of an economy and its industry – price of land, wages of labor, cost of capital, power tariffs, and logistics costs. In India’s case, while tariffs were brought down to single-digit levels, hardly any reforms happened in land, labour, capital, power and logistics, which put Indian industry at a serious disadvantage.

That oversight was compounded by signing FTAs with Asean (Association of Southeast Asian Nations), South Korea and Japan in the late 2000s, all of which had a highly advanced and cost-competitive base in manufacturing. None of the deals leveraged India’s strength in services sufficiently, and there were lapses in negotiating critical areas like rules of origin for some industrial products with the result that the growth in imports from ASEAN, South Korea and Japan was much faster than the growth of exports.

The story with China was similar, but without any FTA. India’s trade deficit with China, hardly $1 billion in 2000, became more than $60 billion in less than two decades. Unsurprisingly, the imports from China were of manufactured goods, while exports from India were largely primary goods. Again, China’s cost-competitiveness, a lot of which is induced by government subsidies on land, capital, and power, was unbeatable.

Indian manufacturing would not have grown under those long shadows. The share of manufacturing in India’s GDP refused to budge beyond the 15% level, lower than it was in 1991. This is highly consequential in an economy where there is still plenty of surpluses, underemployed labor in agriculture, and a constant clamor for good quality jobs. Services have done remarkably well, but they alone cannot solve the good jobs problem. Manufacturing jobs are necessary.

The decision to stay out of the RCEP was correct because, effectively, that would have meant an FTA with China and further erosion of India’s industrial base, particularly in the MSME space. In fact, India already had FTAs with 12 of RCEP’s 15 members – the 10 ASEAN countries, Japan and South Korea. Australia and New Zealand were the two that would be left out of an FTA opportunity with India. Now, by signing an agreement with Australia, India has made it clear that staying out of RCEP was primarily about, and strategically aimed at, China.

There is much wisdom in negotiating FTAs with developed countries like Australia, New Zealand, the US, as well as the EU. India’s manufacturing is likely to be cost-competitive with its counterparts in these countries where costs are usually much higher than in China or parts of East Asia. Also, the advanced countries are looking at diversifying their supply chains away from China, which dominates manufacturing exports to the advanced countries. India is a natural alternative.

There is also room to negotiate on services, particularly more work visas for Indians. Naturally, there will be some sticky issues as well where India may have to cede some ground – motorcycles from the US, wine and cheese from the EU, dairy products from Australia and New Zealand, to name a few. India will have to concede some while safeguarding the most sensitive areas, as it has done with Australia by protecting the interests of Indian farmers.

If India can forge FTAs with some of the largest economies – adding the US and the EU to Japan, South Korea, ASEAN, and Australia – then its general most favored nation (MFN) tariff rates will effectively be tools to protect the industry from China’s non-level playing field. There will be little danger of pre-1991 type of inefficiency because the industry will have to face competition but on a more level playing field.