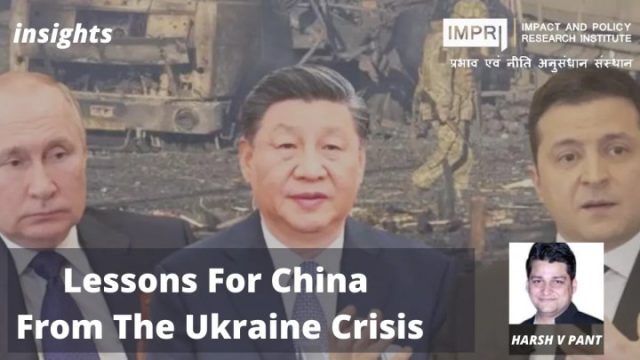 When the Ukraine crisis hit the headlines a few months ago, conventional wisdom suggested that whichever way the situation evolved, China would be its biggest beneficiary. Since the start of covid, China’s global image had gone for a toss. The Chinese Communist Party, by following a hardline policy around its periphery, had already ensured that pushback in the region had begun. There was a recalibration in the US of the long-term viability of its economic ties with China.

When the pandemic struck in 2020, China was widely viewed as an irresponsible global power that would go to any length to preserve its narrow interests. The emerging global order became one where major powers started reassessing their policy priorities vis-à-vis China. The world was realizing that a China-led global order can be quite deleterious and steps were needed to effect a better balance.

And then came the Russian invasion of Ukraine. So long as it was primarily military posturing by Russia for a larger geopolitical restructuring of European security, it worked well for China. But once the invasion began and the conflict escalated, with Russia finding it difficult to make quick gains, China has been struggling for a response. Even as Russia has reportedly asked China for military aid and help in evading western sanctions, the US has warned Beijing of hard consequences if it tried to do so.

Though Xi has resisted attempts to play the mediator role requested by Ukraine, it is clear that the costs of defending Russian President Vladimir Putin are rising, with Russia getting bogged down and sanctions hurting China’s economy, which had lately been trying to find a firmer footing amid mounting domestic challenges. Beijing has not condemned the invasion and maintained that Sino-Russian friendship remains “rock solid” despite its growing discomfort at the fate of Russian forces and the geopolitical alignments this war has ushered in, most of them detrimental to Chinese long-term interests.

Though some in the West have suggested that Xi should be worried about the reputational costs of associating closely with Putin, this is unlikely to be of any significance. China’s reputational loss globally predates this war and won’t be much affected by what Putin does or doesn’t do. But what would worry the Chinese leadership is the economic challenge of maintaining close ties with Russia at a time when its growth rate is the lowest in three decades.

For all the talk of a declining West, its unprecedented economic crackdown on Russia underscores the financial heft that Washington still wields in the global economy. Not only American allies in Europe but also in the Indo-Pacific, like Japan and Australia, have rallied behind US efforts like sanctions, export controls and targeting of Russian oligarchs. For a long, China had tried to exploit the differences among Western nations to its advantage. But this crisis has brought them all closer to an unprecedented degree and China’s trade ties with the EU could face scrutiny.

Much as the pandemic underscored for all countries the challenges of over-reliance on China for global supply chains, the Ukraine crisis is signalling for Europe the unsustainability of a long-term dependence on Russia for energy. Beyond economics, a strategic convergence among Western powers will reshape global geopolitics. Nato and the EU have been given a new lease of life and European nations are more determined than ever to strengthen their security structures. As if to signal Beijing that it is firmly on their radar, leaders of the Quad held a virtual summit recently to underline their commitment to work together, even if their approaches to the Ukraine conflict differ.

China is not Russia. It has vital stakes in the global economy. At a time of declining growth, the last thing it needs is global economic volatility. It remains highly dependent on two key markets: the US and the EU. Xi and Putin may share an aversion to Western influence and both may have an interest in pushing back its expansionist agenda, but for China, stability is key to achieving its long-term agenda of global domination. Russia, on the other hand, is an economic lightweight, and for all its pretensions, the Ukraine conflict has exposed its vulnerabilities. Nuclear bluster seems like the only way it can get the attention of the world.

There is a reason why China is now sympathetic to Ukrainian concerns and European entreaties. It has recognized that its ties with the West have reached a tipping point unless it is seen to be doing something with regard to the conflict. It is unlikely that China would go beyond a point against Putin, but it is learning lessons from this crisis, much like it learnt from the disintegration of the former Soviet Union.

First published at LiveMint, What China may have learnt and unlearnt from the Ukraine crisis, on March 14 2022

Read more by Harsh V Pant at The Game of Stakes: Russian Invasion of Ukraine