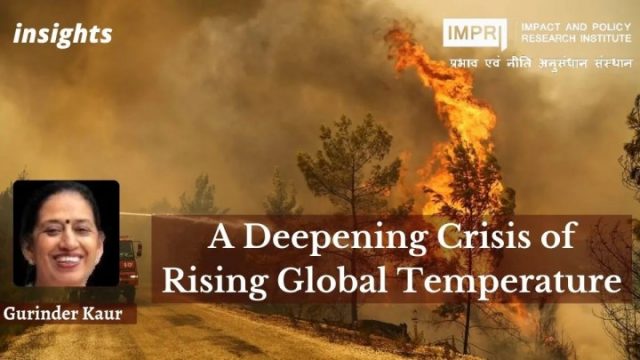 On 28 February 2022, the second installment of the Sixth Assessment Report of the IPCC (Intergovernmental Panel on Climate Change), “Climate Change 2020: Impacts, Adaptation, and Vulnerability” was released in Geneva. This report warned that heat and humidity will create conditions beyond human tolerance if emissions are not rapidly reduced. India is among the places that will experience these intolerable conditions.

According to this report, the extent and magnitude of climate change impacts are larger than

estimated in previous assessments, and the disastrous impacts of the climate crisis are multifold higher than before. Earth’s average temperature has risen by 1.1 degrees Celsius since the pre-Industrial Revolution period, bringing Earth’s various ecosystems to the point where it is impossible to revive them.

Worryingly, greenhouse gas emissions are not being cut sharply and no concrete plans have been drawn up. Although many promises were made in November 2021 at the Conference of Parties-26 in Glasgow and various plans were discussed, nothing was said about how much time countries will take to shape these plans into concrete actions and implement them.

According to the second installment of the sixth report, climate change is now affecting every nuke and corner of the world. If all countries in the world fail to halve greenhouse gas emissions by this decade (2020-30), it could have dire consequences.

According to the latest IPCC report, the world’s 3.3 to 3.6 million people now live in regions that are vulnerable to the climate crisis and nearly 50 percent of the world’s population suffers severe water shortages at some point during the year. Rising temperatures also hit one in three people with heat waves and this is projected to increase to 50 to 75 percent by the end of the century.

One billion people living in coastal areas will be exposed to all kinds of maritime disasters by 2050. Rising temperatures are also adversely affecting people’s mental and physical health. Diseases such as dengue, malaria, and cholera are wreaking havoc on human health, with high temperatures, extreme rainfall in a short span of time, and the increased melting of glaciers.

Under a high emissions scenario, increased flood risk could lead to additional 48,000 deaths in children under the age of 15 years old in 2030, due to diarrhea.

The impacts of the climate crisis are complex. This has a series of effects such as changes in the average amount of rainfall in a short period of time due to an increase in temperature, sometimes causing floods and sometimes droughts which reduce the yield of crops.

If 1 to 4 degree Celsius rise in temperature that could reduce maize production by 25 to 70 percent and rice production by 10 to 30 percent in South Asian countries, resulting in lower household incomes and food shortages. Food shortages will push up food prices beyond the reach of the poor and increase malnutrition, leading to an increase in starvation deaths.

The report also said that if temperatures continue to rise at current rates, 183 million people will starve by 2050. By the end of the century, one million children in Africa alone could die from food shortages.

Rising temperatures are also severely damaging biodiversity. Many species of wildlife are becoming extinct. The report cites a research study that found that 47 percent of the 947 species of flora and fauna were being lost due to rising temperatures.

The White subspecies of the Lemuroid Ringtail Possum disappeared after the 2005 heatwaves in Australia and the Bramble K. Melomys (Melomys Rubicola) to say goodbye to this world forever after 2008 with sea-level rise and storm surge. As sea levels rise, more coastal areas are submerged underwater, leading to a decline in many species of turtles as they lay their eggs on specific beaches of these coastal areas.

As temperatures rise, polar ice caps and glaciers are melting faster on the one hand and rising sea levels on the other. Such a phenomenon would destabilize the ecosystems of the mountains and the coastal area. The biodiversity of mountainous and cold regions will gradually disappear and the flora and fauna of tropical regions will gradually shift towards the poles.

Due to the warming of seawater and the increase of acidic substances in it, the coral reefs are disappearing. According to the report, arable land is also declining due to rising temperatures. The 1.1 degree Celsius rise in temperature so far has reduced the arable land by 8 percent.

Even if the average global temperature rises by 1.5 degrees Celsius by the end of this century, arable land will be further reduced, which is likely to adversely affect food production and increase hunger.

Earth and ocean ecosystems run on clean water, air, sunlight, and inorganic and organic (flora and fauna) elements. Due to human activities and climate change, their functioning has deteriorated and they have become unbalanced, resulting in endangerment of flora and fauna in many areas. To save flora and fauna, we must make 30 to 50 percent of the natural ecosystems efficient at all costs.

For the first time, the IPCC report revealed that economic and social inequalities are also responsible for the rise in the average temperature of the earth. At the same time, it is important to point out that natural disasters caused by global warming are hitting poor people and developing countries more than rich people and developed countries.

While the poor people and developing countries are the least responsible for the emission of greenhouse gases. According to this report, small farmers, fishermen, pastoralists, indigenous people, etc. are most affected by natural disasters like heat waves, floods, droughts, and the like. The worst-hit countries are found in South Asia, West, Central and South Africa, Central, and South America, and small island nations.

In the first installment of the sixth IPCC report of the United Nations, scientists have clearly stated that the rise in temperature is due to human activities. Talks on tackling global warming began at the Earth Summit in Brazil in 1992, but developed countries, which have so far released large amounts of greenhouse gases into the atmosphere, have been avoiding this issue by listing many of their excuses.

United Nation Secretary-General Antonio Guterres said during the launch of the report, “this IPCC report is an atlas of human suffering and a damning indictment of failed leadership”. There is destruction in every region of the world which is affecting every living thing (human, flora, and fauna).

According to a United Nations annual Environmental Program Report released on February 23, 2022, increasing greenhouse gas emissions could lead to a 14 percent increase in wildfires by 2030, a 30 percent increase by 2050, and a 50 percent increase by the end of the century. In 2021, heatwaves wreaked havoc in the western part of North America, from the Canadian province of British Columbia to the California state of the United States of America.

Climate change is already causing widespread disruption in every region in the world with just 1.1 degrees Celsius. This 1.1 degree Celsius rise in temperature has led to a nine-fold increase in the incidence of floods in parts of Europe in 2021  and made Australia’s devastating wildfires seasons 30 percent more likely. Even today, Australia is in the grip of severe flooding.

Antonio Guterres says we must reduce greenhouse gas emissions as quickly as possible to avoid the damage caused by global warming, as we have very little time left to reach the safe limit of the Earth’s average temperature under the Paris Agreement.

According to the first installment of the IPCC’s Sixth Assessment Report, the current emissions of greenhouse gases will increase the average temperature of the Earth by 1.5 degrees Celsius by 2040 over the pre-industrial period. With this increase, all the countries in the world will be forced to bear the brunt of terrible natural disasters.

A slight increase in temperature (every part of a degree) has a profound effect on climate change and will escalate threats to people, species, and ecosystems. Even limiting global warming to 1.5 degrees Celsius – a global target in the Paris Agreement) is not safe for all. With just 1.5 degrees Celsius of increase in global average temperature, 14 percent of the flora and fauna and 70 to 90 percent of the coral reefs will be lost by 2030.

Sea level rise of 0.28 to 0.55cms will increase the incidence of floods and wildfires by 24 percent and 30 percent respectively. This means that even a small increase in temperature can be very fatal. Concrete efforts should be made as soon as possible to reduce this rise in temperature.

Efforts need to be made at both national and international levels to curb the rise in average temperatures. Every country needs to take special measures to reduce its greenhouse gas emissions rapidly.

Therefore, the number of flights should be fixed and the means of public transportation should be streamlined like in European countries instead of private vehicles. Due to the changing choice of commercial crops and food preferences, deforestation is accelerating and increasing the number of greenhouse gases in the atmosphere.

Nowadays, meat is being given more priority than grains in the popular choice of food consumption. Large numbers of animals are raised for this preferred food selection, which releases large amounts of carbon dioxide and methane, two gases that warm the atmosphere.

According to a Davis UC research study, domestic animals emit 14.5 percent of the total greenhouse gases into the atmosphere. Forests absorb more carbon dioxide than commercial crops. Therefore, deforestation should be banned in every country and areas under forest should be increased. The choice of food should also be made nature friendly.

Deforestation is increasing the incidence of droughts, floods, wildfires, etc. To combat the rising temperature there is a need to give preference to native trees instead of ornamental and commercially useful tree species.

For example, California in the United States of America, where eucalyptus trees replaced local tree species, has seen an increase in the incidence of droughts and wildfires because eucalyptus trees have a high amount of oil content and they also tend to create more organic waste which increases the chances of wildfires. In order to conserve the natural ecosystem of any place, local vegetation should be given priority.

Renewable sources (wind, water, solar energy)should be used instead of coal or gas to generate energy. At the same time, we need strong, determined, and unselfish leadership to tackle global warming. The United States of America, which is leading the charge, has historically released more greenhouse gases into the atmosphere than any other country in the world.

According to scientists, even if all nations work together to reduce greenhouse gases at a rate of 7.6 percent per year, an increase in the average global temperature by the end of the century would exceed the global target of 1.5 degrees Celsius.

We must stop living like we have another planet to go to. We have a duty to protect our planet and hand it over to the next generations. All nations of the world must act immediately to control global warming and adopt pro-people and nature policies to protect the earth’s inhabitants from the scourge of biological natural disasters.