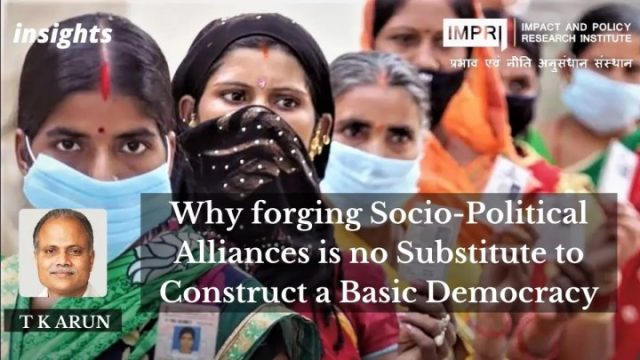 The lesson to be learned from the recent round of assembly elections is not that the Opposition should set its sights on 2029, forget 2024. The takeaway should be that building democracy, rather than targeting the BJP, is the way for the Opposition to prevail.

Elections are a necessary condition for democracy, not a sufficient one. Democracy would call for several things that our polity sadly lacks, besides elections.

One is the rule of law. In most parts of India, we have the rule of lawmen. Custodial deaths, ‘encounter killings’, arresting people and putting them in jail for long periods as undertrials, only to release them, after their youth and their spirit have been consumed in prison, when the courts find them innocent – such routine features of Indian life kill essential promises of democracy: life, liberty and the pursuit of happiness.

Democracy differs from majoritarianism in that certain rights are sacrosanct, regardless of the will of a majority. Individual rights, such as the right to the due process of the law, and group rights, cannot be overridden by a majority. The rule of law and the inclusion of such rights in the basic law of the polity, the Constitution, ensure this. Constitution review commissions are appointed to get rid of such impediments.

A sizeable section of voters proved, in the recent assembly elections, the point that god appears to the poor as a loaf of bread. Free cereals and lentils distributed as part of Covid relief have touched many lives. Housing for the poor, pension payments, and drinking water schemes have benefited many. Their gratitude has manifested as pro-incumbency votes.

How can a government be faulted for its effective welfare measures? Don’t people elect a government to provide them with such benefits?

If benefits were all that mattered, Xi Jinping and the Chinese model should be the ideal. A farm animal is also fed, protected from predators, treated when it falls ill, and cared for otherwise. But that farm animal or a Chinese worker does not have that one quality that sets humans apart from other biological species: freedom. Freedom of spirit, freedom of thought and speech, freedom of action, freedom of movement, freedom to create, to make, and unmake.

Freedom is constrained only by the requirement to respect and protect the freedom of others, by the obligation to not injure others. Because the others are also your equals – people might differ in their innate qualities and abilities, in their views and tastes, in their faith and culture, but they are equal in their right to be free.

If people do not value freedom, their society cannot be democratic. If the pragmatism of a lapdog, licking dirty feet and cringing for his meat, appeals to you as being superior to the lone dog’s preference for ‘wide wind, wild stars, and hunger of the quest’, you are an ideal subject, not an ideal citizen.

Freedoms might be written into a Constitution and professed, but denied in practice. This happens as a result of highly unequal distribution in the society of power, wealth, income, opportunities, and knowledge, broadly defined to include culture. India has traditionally been – and continues to be – a hierarchical society, inequality inscribed into a social structure via caste. A political program to redefine Indian nationhood as a Hindu seeks to add one more layer of inequality, the political degradation of non-Hindus.

How to make this kind of social democratic? The Constitution is a big help. Demanding and mobilizing people for enforcement of the law is one key strategy. Educate, organize and agitate, said Ambedkar, who knew a thing or two about resisting oppression. But this was hardly original on Ambedkar’s part.

Jyotiba Phule, Ayyankali, Sree Narayana Guru, Periyar, all social reformers of the modern era have sought to educate, organize and agitate. Ayyankali forced upper-caste landlords to admit Dalit children into schools by organizing those who tilled the land to boycott, at great cost, all work for two sowing seasons.

A Dalit girl was gang-raped and assaulted. When she succumbed to her injuries, her body was hastily cremated in the middle of the night by the police. This became a scandal and little more. It did not lead to questioning of the structures of power, political and social, that allowed such a thing to happen. Why? Because there was no organized attempt to tackle the structural factors underlying the atrocity. There was only an attempt to blame the ruling party.

Tackling the structural factors would be building democracy. Acquiescing in their continuance and blaming the ruling party is politicking. Why blame the people if they choose patronage that gives them some benefits over futile politicking?