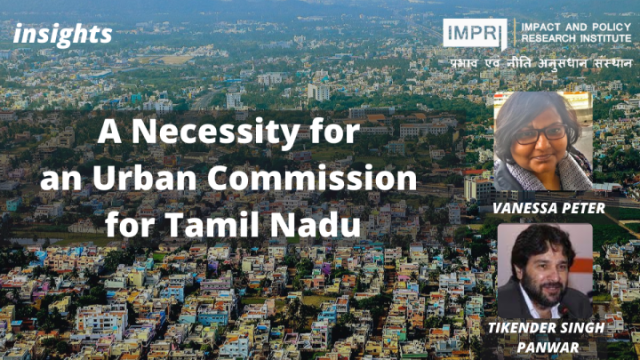 The Tamil Nadu government envisions responsive city governance to mitigate poverty and ensure a decent quality of life for all by adopting an inclusive, participatory, transparent and accountable approach to urban development.
What kind of urban Tamil Nadu is desired? This is the foremost question that the government must address.

The role of the elected representatives of the urban local bodies is fundamental in addressing the concerns of the vulnerable sections in urban areas. The cities, however, in the past decade have been run in a bureaucratic manner with processes linked to the neoliberal paradigm. The city planning was done mainly by parastatals, which kept the public away from the decision-making process. Instead of making piecemeal efforts, it is pertinent that TN forms a state-level urban commission, comprising elected representatives, architects, town planners, activists, economists, sociologists and other stakeholders.

There was only one urban commission formed in the country in the mid1980s led by architect Charles Correa. Since then, there is a project-oriented approach instead of a comprehensive understanding of the urban dynamics.
In TN, an urban commission can help lay a blueprint for the urbanisation of the state. There has to be scope for more democracy which is not just participatory but empowers people through decision making. The present government can enter into such a domain and this can be a leading light, unlike the Smart City project of the Union government, which was supposed to be a lighthouse of urban development but is turning out to be a fiasco.

Even after three decades of the 74th Constitutional Amendment the following functions envisioned under the law are still not passed on to the urban local bodies (ULBs): Planning for economic and social development, water supply, slum improvement and up-gradation, urban poverty alleviation, health, and safeguarding the interests of weaker sections of society. However, the devolution of power to ULBs have not transpired because of the prevailing model of urban governance that has vested the functional domain of the ULBs to the different parastatal agencies.

In Tamil Nadu, providing services through parastatal agencies is a preferred approach for urban development. Slum improvement and up-gradation instead of being under ULBs come under the overview of the Tamil Nadu Urban Habitat Development Board. The board does not include any of the elected members of the local administration thereby minimising people’s participation in implementing the housing programmes for the vulnerable sections. Representation from the ULB is the commissioner whereas the mayor, who is the elected representative, is not a member.

Similarly, urban planning and finance are handled by parastatal agencies like the Tamil Nadu Urban Infrastructure Trustee Company Limited and Tamil Nadu Urban Finance and Infrastructure Development Corporation.
The shift from a market-centric approach to a people-centric approach is a challenge as the special purpose vehicles (SPVs) set up by the state are already created to plan, approve, release funds, implement and monitor projects such as the Smart City Missions.

The roles of such SPVs overlap the functions of the ULBs specified in the 12th schedule. The efforts were undertaken to empower the SPVs to limit the ULBs resulting in disparities of services among the poor as such services to the poor are viewed as economically unfeasible. This is evident in the Smart Cities programme in Chennai where the only project directly benefiting the vulnerable section is the art district planned in Kannagi Nagar, a resettlement site comprising more than 23,000 houses, where communities continue to grapple with livelihood issues, access to basic amenities and clean water.

There is a disconnect between what was implemented and the ground reality, which could have been addressed if elected representatives are included in the decision-making process.

To uphold the spirit of local governance and grassroots democracy, the roles of the newly elected representatives need to be augmented. Their involvement in the decision-making process especially in the SPVs and the other agencies providing basic services to the people is the first best step for addressing concerns of the vulnerable sections.

In this context of resettlement of people from low-income groups in the peripheral areas of the city, elected representatives can ensure that the voice of the affected people does not go unheard and that all possible alternatives are explored prior to eviction from the heart of the city.

With the government of Tamil Nadu exploring possibilities of setting up area sabhas and ward committees, there is a need to include representation of the vulnerable sections including residents’ welfare association of low-income settlements, street vendors’ associations, people with disability and trans people. To break the inertia in the urban planning process a new paradigm of development must be built on the basis of empowering people.

It’s nearly three decades since the enforcement of the Nagarpalika Act, however, the reforms have not reached all citizens. The urban commission can chart out a road map in this regard. Another area of concern is the impact of climate change on the cities. Chennai is a classic example where the city has experienced floods and drought. How cities can be made resilient and what kind of infrastructure must be developed should be part of the urban commission’s domain.

First published at Times Of India, Why Tamil Nadu needs an urban commission to manage its cities, on 16th March 2022