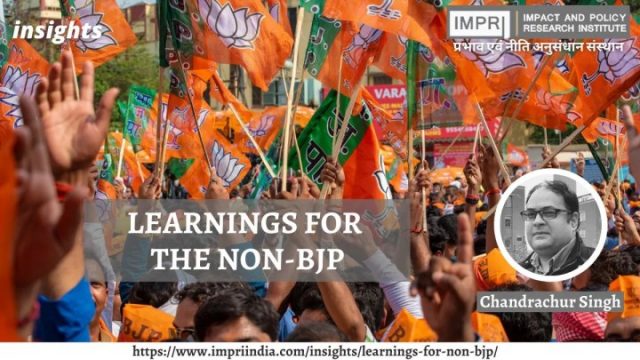 Representative democracy is a mechanism that best ensures accountability, responsiveness and trust of the people in their elected officials. Given the rising expectations of the people from the government, retaining trust is no mean achievement. The victory of the Bharatiya Janata Party (BJP) in four out of five states in the assembly elections has been spectacular.

Many factors – the charismatic persona of Prime Minister (PM) Narendra Modi, the mathematical abilities of home minister Amit Shah, buttressed by the machismo of the incumbent Uttar Pradesh (UP) chief minister Yogi Adityanath, the narratives of improved law and order, developmentalism propelled by a double-engine government, the waning of dynastic/caste politics along with the polarising attempts by the main claimants in the electoral battleground, have been put forward as reasons behind the BJP’s success.

While these factors may have played a role in their substantive ways, the election results also point to two different, though interrelated, developments in the shifting dynamics of party politics in India. First, despite the colossal presence of the BJP, particularly in the heartland, the possibilities of oppositional spaces still exist. The consolidation of the Samajwadi Party in UP, the gains of the Congress in Uttarakhand (relative to its past performance in 2017), the landslide victory of the Aam Aadmi Party (AAP) in Punjab proves the point.

However, the spaces cannot be filled up by default, i.e., by others only because they exist. And this then paves the way for the second development – i.e., occupying these spaces is arduous because doing so would require the non-BJP parties to undertake structural changes in their organisational makeup and come up with alternative narratives that are not just substantial but credible as well.

Most importantly, the non-BJP parties need to realise that the electoral successes of the BJP in recent years, particularly in the heartland, did not happen in one day. It results from a conviction of creating a strong nation, an egalitarian social order via social reforms and engineering, economic upliftment and inclusion nurtured and diligently worked on by the Rashtriya Swayamsevak Sangh (RSS) for a substantially long time.

It should be remembered that it was under the leadership of its third sarsanghchalak – Madhukar Dattatraya Deoras, also known as Balasahab Deoras, that this work of building broad-based coalitions first began in the 1970s. The rise of PM Modi to the highest echelons of power and his passionate commitment to four Ds – Discipline of party cadre, Decisiveness in picking agenda and candidates, Development in taking the fruits of governance to doorstep, Diversity in building social coalitions, most importantly his defiant, devoted and dexterous leadership – has only cemented the work that for a few decades has been in progress.

Axiomatically, for a few decades post-1970s, the task of social empowerment and inclusion somehow got identified with a host of caste-based regional leaders, giving them an enduring presence in the political landscape. But that is a development of the past. The rise and rise of PM Modi converge with three things.

First, with PM Modi being seen as the strongest leader of our times, it means that the issue of social empowerment is no longer the exclusive domain of the regional satraps; Second, the satraps themselves have been ageing for years now and their heirs apparent certainly seem to be lagging in constructing or forging strong identities with caste groups a little distant from theirs; Third, given that the agenda of affirmative action is carved in stone now, no amount of mobilisation solely based on caste identities would be enough to ensure positive electoral outcomes.

By building on the issues of nationalism, Hindutva and developmentalism, and integrating foreign policy goals and issues within its spurs of electoral mobilisations, the BJP has been able to adroitly create a pitch for electoral competition that is most suitable to its mobilising campaigns. The non-BJP parties, instead of offering an alternative narrative, discourse or pitch, so to say in analogous terms, have innocuously only been happy playing on it; the working style of the AAP points to this. Playing on the same pitch may result in successes here and there but the outcomes more often than not will be in favour of the curators.

In an emotive scene in the blockbuster movie Dewar, Amitabh Bachchan in an attempt towards ridiculing Shashi Kapoor’s pride and honesty, pops-up a question – ‘Tumhare pass kya hai?’ (What do you have?). Shashi Kapoor replies – Mere pass maa hai. (I have a mother). But, perhaps the most significant lesson that the non-BJP parties could learn from the BJP is by delving into the ways in which the latter receives lifelines from the RSS.

It is certain that the electorate in UP, Uttarakhand, Manipur, Goa and Punjab were massively upset with a host of issues, ranging from the sufferings induced by the pandemic to price rise, to unemployment and the like. Naturally, the non-BJP parties tried their best to play on them as well. But the BJP could eventually ward-off such narratives because of the work done by the RSS.

It is a fact that with its many cultural-educational, social religious sub-organisations, the RSS cadres pitched in reaching out to the distressed and the vulnerable during the pandemic. The RSS volunteers were quick in plugging leaks wherever and whichever forms they may have existed. It certainly allowed the BJP governments to override discontents on accounts of official apathy. Later, doubling-up as booth level workers and mobilisers during the elections the RSS cadre also ensured that the beneficiaries do turn out to vote. Eventually, the BJP not only retained its vote share in all four states but could actually add on to it. This then is another lesson in the offing.

In fact, if a double engine exists anywhere, it is the double engine comprising of formal governmental/party structures backed up by the organisations and volunteers of the RSS. It is this double engine that other political parties do not have. Sadly, instead of learning from the mechanism at work, non-BJP parties have only been attacking the RSS, which over the years have found increasing acceptance and legitimacy amongst the masses.

When it comes to electoral battles, the RSS does the most valuable work by screening, shortlisting and recruiting new cadres and keeping them motivated by giving them hope that they would rise to high positions one day. This in turn galvanises the electoral process allowing genuine outreach – message delivery, countering oppositional narratives and building a strong and emotional connect with the main leader.

So, there are lessons for the non-BJP parties to learn. There are spaces in the electoral arena but these cannot be filled in only because they are there. Organisational presence, dynamic recruitment policy, developmental narrative and the presence on the grassroots to connect the masses with the leadership is the essence of success.

First published in the Hindustan Times, What the Opposition can learn from the BJP, on March 22, 2022.