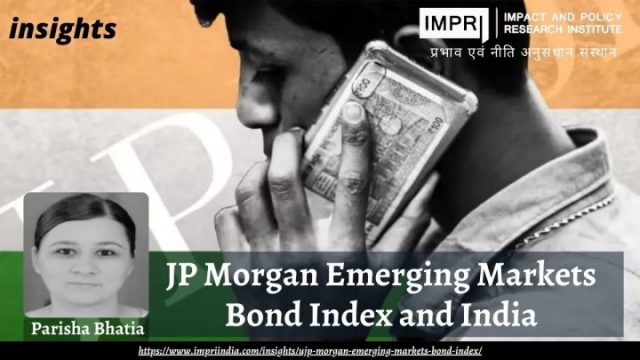 With the expected announcement of India’s inclusion in JP Morgan and Chase Co.’s emerging markets bond index as early as mid-September and effective entry in the third quarter of next year, there is an ongoing debate on how the inclusion will benefit India and what kind of policy interventions from the Reserve Bank of India (RBI) and the Indian Government would maximise gains. Russia’s exclusion, and India’s potential for being the biggest bond market among emerging economies not covered by global indices are the main reasons for India being given this offer.

Both Morgan Stanley and Goldman Sachs expect India’s weight to be 10% (maximum for a country in the index) and forex inflow of $30 billion from the move. There was initial disagreement due to the Indian government’s unwillingness to reduce foreigner’s capital gains tax. However, after Russia’s exclusion there was an increased incentive for India’s inclusion.

According to certain predictions by experts, if India is included in the JP Morgan bond Index, there will be forex inflow of about $ 30 billion due to increase in demand for Indian G-Secs. Higher demand leads to higher prices and lower yields. A greater forex inflow will have a positive impact on domestic currency, i.e., it will strengthen the rupee, but, on the other hand, lower yield will disincentivise investments. To protect the yield, the RBI can intervene by selling G-Secs but this will then reduce the positive impact on domestic currency. Hence, we have a trade-off between lower yield and stronger currency.

It must be noted that a rise in bond prices will lead to greater capital gains, but foreign investors would have to pay capital gains tax, which the Indian government is not willing to reduce as it would present a bias against domestic investors.

Besides a positive impact on economic growth, capital inflows come with adverse effects too. With appreciation of domestic currency due to capital inflows, there is undermining of competitiveness for export industries, and potentially rising inflation. India is already facing issues due to increasing inflation, and will have to be careful with the decision of being included in a global bond index and how the RBI would use its policy tools to lower capital inflow effects on inflation is also a matter of high concern.

To reduce the effects of inflation, the policy that central banks often use is called ‘sterilization’ of capital flows. Under this policy, central banks concentrate on reducing the domestic monetary base or reducing domestic money supply, which helps in tackling inflation. This can be done in the following ways:

All these will surely reduce the domestic monetary base but due to reduced money supply, the domestic interest rate will rise which will lead to even greater capital inflows in the long run. Further, the implementation of sterilization policy and its success are two different things, as people would have to be highly incentivised to change their ways in accordance with the policy.

Despite all the possible adverse effects, India can benefit from this inclusion if policy intervention and incentive creation are carried out systematically. India’s current account deficit due to COVID and other global affects can be meaningfully tackled through this huge forex inflow. Moreover, the falling rupee can be stabilised – it can appreciate or at the least, not depreciate further – with this inclusion.