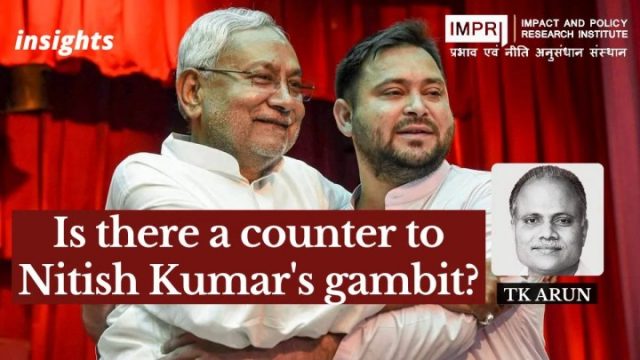 It takes a snake roughly two weeks to slough off its skin and grow a fresh one. If Nitish Kumar had taken a fortnight to moult his current political positioning, so as to respond to the perceived threat of the BJP trying to split his party, the Janata Dal (United), his political career would have been over by now. So, Nitish made a pre-emptive strike, moving faster than a snake, dumped the BJP, struck up an alliance with the Rashtriya Janata Dal (RJD), ensured that party’s support for a government led by him, and so held his team of MLAs together. A smarting BJP might now try to accelerate the pace of its toppling game in Jharkhand and elsewhere.

Nitish is a wily politician. The charge of ideological flexibility some critics make against him is wholly baseless. An unwavering commitment to power is an ideology only in a trivial sense; it is more a character trait, and takes a combination of cunning, ruthlessness and the will to act at short notice, to live up to. Nitish has these in plenty, and, as proof, is being sworn in as chief minister of Bihar for an eighth time, precisely on account of those characteristics.

The BJP leadership, gloating in the aftermath of having brought the Maharashtra government down and installed its own people in Mumbai, has been dealt a body blow. This also breathes new life into the Opposition’s efforts to cobble together grand alliances against the BJP in time for the next general elections of 2024. That this big roadblock has been put in the path of the BJP juggernaut by a regional party, even as the Congress plays a bit role in support, further erodes the Grand Old Party’s claim to lead a combined resistance to the BJP.

However, the BJP’s own strategy of mobilization along religious lines would set off a dynamic that would make building and protecting democracy the central theme of opposition to the BJP, rather than merely relying on caste and community groupings. That potentially is good for a Big Tent party like the Congress that can accommodate diverse regional aspirations that share a common purpose in building democracy as the means to realizing regional goals, as part of a convergent, national vision. Good, visionary leadership could convert that potential into reality. But the Congress only has Rahul Gandhi and his clueless clones at the top.

Recently, some Congress MLAs from Jharkhand had been apprehended in Kolkata with a lot of cash in their possession. The Congress claimed that this showed that the BJP was trying to buy their MLAs, in order to topple the government in Jharkhand, which is led by the Jharkhand Mukti Morcha, with the Congress as a coalition partner. With the successful toppling of the Madhya Pradesh government and, later, the Maharashtra government, the BJP is confident that it can put together a BJP-led government anywhere in India.

In Bihar, Nitish’s JD(U) found it strange that the BJP had insisted on RCP Singh, a Rajya Sabha member, as the only acceptable JD(U) nominee for membership of the Union council of ministers. In a coalition, what is decided at the level of the coalition and its leadership is the number of ministers each coalition member can have, but not the identity of the minister from a coalition partner. Nitish had grounds to suspect that RCP Singh had been chosen to play in Bihar Shinde’s role in Maharashtra, and Scindia’s, in Madhya Pradesh.

That the JD(U)’s partnership with the BJP in Bihar had not exactly been one of love and longing for each other has been clear from the time of the BJP’s silent encouragement of Chirag Pawan’s attacks on Nitish during campaigning for the last assembly elections. That had resulted in the coalition securing a majority with the BJP emerging as the larger partner, by far, with 74 seats, against the JD(U)’s tally of 43. The BJP still made Nitish the chief minister, in a gesture of patronage that must have rankled.

The BJP is an ambitious party, whose goal in forming coalitions is not the healthy growth of their allies but the expansion of the BJP to a dominant position that would make coalitions redundant in the future. This is a legitimate goal for a political party, if managed with finesse and patience.

Now that Nitish has dumped the BJP before the BJP could dump him, how would the BJP react? It would claim to occupy the Opposition space and position itself as the successor government, come the next elections. That is in Bihar. But nationally, there would also be the urge to avenge this humiliation the party has been dealt in Bihar.

BJP leaders are already boasting that the Mamata Banerjee government would be toppled by December. Similar moves could be afoot in Chhattisgarh and Rajasthan, too.

What is in it for the RJD? Why should it support Nitish as chief minister? Without Nitish becoming chief minister at the head of an alternate coalition, there was the serious possibility of the BJP buying up enough MLAs from not just the JD(U) but from other parties as well, to form a government of its own. The RJD’s gain from supporting Nitish is that it removes the BJP as a ruling party in Bihar.

Now that this goal has been achieved, will the RJD continue to support Nitish for chief minister? From a pure calculus of self-interest, it makes sense for the RJD to finish off Nitish as a political factor in Bihar. If sufficient bad blood is created between the BJP and the JD(U), it is possible for the RJD to dump Nitish and make him contest elections on his own strength. That would probably reduce him to the non-entity he proved himself to be in the 2014 Lok Sabha elections, the only occasion when Nitish has contested elections on his own.

Since then, it is true, he has acquired some additional support from women, with his gambit of banning alcohol, and cultivated the Extremely Backward Classes. The alcohol ban has put off men in equal numbers, and EBCs can be wooed by the RJD as well. It is possible for the RJD to dump Nitish and go it alone or together with the Congress or the Janata rump, and finish off JD(U) as a party.

But that calls for coldblooded guts. Nitish is a consummate player of the cards he is dealt. Lalu Yadav and his family face assorted corruption charges. The risk of a vengeful Nitish, who musters support even from the BJP, to go after Lalu and his family, is something Tejaswi Yadav has to take into account. A man who could, without much of a support base of his own, manage to become chief minister eight times around, is not to be trifled with.

That said, fortune favours the bold in politics. If Tejaswi is willing to take a risk and split the alliance a year or so down the line, there is a good chance of Nitish falling off the ladder of survival he has been climbing for years, and leaving the path open for Tejaswi to play a new kind of politics that combines traditional mobilization of caste and community groups with the championing of solutions to common problems of society, such as unemployment, which proved more than viable in the 2020 elections.

The BJP will try to rally people behind Hindutva, probably rousing animosity towards Muslims as it traditionally has, in order to counter the traditional appeals to caste solidarity by the RJD and other social justice parties. It is time the Opposition realized that a fight for democracy would be more inspiring and unifying than any appeal to group grievance.

This article was first published in The Federal as Nitish Kumar is a wily politician; is there a counter to his gambit? on 10 August 2022.