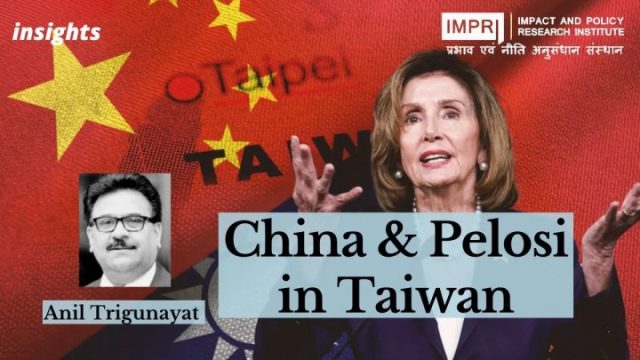 The visit of US Congress Chairperson Nancy Pelosi to Taiwan , even for 20 odd hours , was bound to create the controversy and conflict that the politicians and pedagogues often find useful in their quest for superiority especially when you happen to be No. 3 person in the most powerful country in the world . And you choose your target and enemy where biggest impact is felt.

This is precisely what one witnessed when Nancy Pelosi took a circuitous route to Taipei confusing some as in the beginning of the draft itinerary Taiwan was left out purposely while touching down in Singapore , Philippines , and eventually to South Korea and Japan. President Biden and his Administration officials did not seem to find great merit in the visit and tried to distance themselves terming it  as the independent decision of the legislative branch. But only the naïve would fall for it. Nor did the wily Chinese fell for it.

Biden tried to assuage his nemesis comrade Xi Jinping  in an over 2hour long talk. But the Chinese reaction was “If you play with fire you will perish with it”. Nancy is known to be a  China baiter for decades and has been to infamous  Tiananmen Square in 1990s as well as to Taipei in 1999 . She is hawkish for  Taiwanese democracy and was able to clearly send the message that US will stand with the  Taiwanese people in accordance with the Taiwan Relations Act ( 1979)  that was passed by the US legislature and is binding  even as she tempered it by saying that she supported the status quo.

But Beijing and CPC as well as PLA think that the current Taiwanese Iron Lady President Tsai, already in her second term, does want independence and seeks the western support for the same. For China that’s the big red line as it considers the island nation as its renegade yet integral part and any high level visits with a clear agenda to further strengthen the Taiwanese ambition will provoke response. The Chinese Ambassador in his Oped in Washington Post tried to vainly justify Chinese claims and futility of the provocative visit.

So did Madam Pelosi in her Oped to justify the purpose of her visit and was crowned with the highest decoration by the Taiwanese Government. Were the Americans trying to test the waters in the Taiwan strait and to assess and analyze the Chinese eventual strategy that was to be displayed through its military exercises and blockade of Taiwan to follow.

After condemning the visit in high decibel statements Beijing said the PLA will not sit ‘idly by’ .  So the PLA waited for Pelosi to exit after her 20 hour sojourn on the island before embarking on comprehensive military exercises with a near blockade of the island nation . Its fighter jets repeatedly violated  the agreed Median  line between the two creating mischief and provocation. Any mistakes there could cause a conflagration that the economically decimated world can ill afford .

How long will that last will depend on many factors . Meanwhile , sanctions have been placed on Taiwanese food and other companies while the supply of special sand required for the giant chipmakers in Taiwan has been stopped. As such there has been a shortage of the semiconductors in communications and automotive industries disrupting the production lines as well as the global supply chains and will also affect Beijing.

Those of you who have ever played the Indian game of “Kabaddi” could relate to this dare by Nancy who wanted to score the points by going in with a deeper challenge and touching the guys where it hurts the most. Chinese are trying to cover the lost perception ground. Both US and China are on a weak wicket due to domestic constraints playing to the gallery and in turn jeopardizing the global peace and security. Beijing is maintaining the pressure on Taiwan and the relationship with US has been further strained.

It ‘s nine live missiles were targeted at the Japanese Economic Zone and the Taiwan straits which are so very critical for maritime trade and connectivity. After the G7 Statement , taking the visit by Pelosi as some kind of routine and criticizing Beijing for precipitating a crisis by finding an excuse , Chinese Foreign Minister cancelled his scheduled meeting on the sidelines of ASEAN meet in Cambodia.

It also suspended talks with USA on military and climate change cooperation among others . At the recent UN meet on Non-proliferation China asked USA to remove its nuclear weapons from Europe. These  will signify further stress on the already embattled climate degradation further accentuated by the Russia -Ukraine war provoking a return to fossil fuels and coal and quest for more pumping of oil and gas.

It would also imply that China will be free to provide weapons and other military assistance to Moscow which has openly stood with Beijing and criticized USA as the master ‘Provocateur’. Drug trafficking will also increase. Has the Pelosi visited helped the Taiwan cause? Unlikely as the old saying goes neither the friendship nor the enmity with bullies and goons is good. Pelosi may have pleased a worried  Taiwanese leadership and her constituency in California which has significant Taiwanese Americans and could reap some electoral  gains but the larger good has hardly been served except symbolism.

Even as she was praising Taiwan as an island of resilience and comparing  democracy and autocracy and committing the US to defend the island against Chinese  invasion and isolation , the Taiwanese would not like to be the munition for Sino-US rivalry seeing the plight of Ukrainians in the other war. US Administration is in quandary as several strategic calculations , unless it was a devious design knowing too well the Chinese response, may have gone awry. Anticipated Meeting between Biden and Xi Jinping on the sidelines of the G20 or APEC may be cold boxed for now.

As for China crying about violation of its sovereignty and territorial integrity it is shallow and sounds more hollow since it is the biggest and master violator of those tenets with territorial disputes and hegemonistic aggression with over 20 countries including India. As far as New Delhi is concerned even though it follows a ‘One China’ policy like the Americans but for that Beijing and CPC and PLA need to follow’ One INDIA ‘policy lest the reciprocity might ensue.

The whole problem of the Indo-Pacific rests on the maritime freedom of navigation, free and open Indo-Pacific which Beijing considers as its “ Jagir” and fiefdom and believes in denial of the global commons by violation of the Law of The Seas . It worries its neighbors as it also follows the same hegemonistic model as any other superpower.

But superpowers need not forget their own track record on the battle field. All have handsomely lost be it China and USA in Vietnam, Soviet Union and USA and the British in Afghanistan or today’s Russia  stretched against the Ukrainians and unlikely to emerge victorious in real sense of the term. Likewise, Iraq and Libya wars and bombings by the NATO have led to more terrorism let alone those being illegitimate.

Pelosi’s visit may have expedited and honed the Chinese desire to annex Taiwan which it may have been avoiding as simple logic tells that either have the whole chicken in one  day or have eggs for years to come. Taipei is one of the biggest investors in China including in technology. And Beijing also depends on its supply of semiconductors etc. Although Chinese may not have wanted to rock the boat but Nancy may have holed it in.

For the moment China is imposing sanctions on Taiwan to teach them a lesson and has extended its fire drills and deployments in the Taiwan strait as Taiwan is getting ready to defend itself. US has also beefed up its presence. How would President Xi Jinping fare with his home turf as this  year is  so crucial for his own longevity and continuity will be incumbent upon the posturing , perceptions and the outcomes of this standoff.

Brute power and stunted calculations for ‘one upmanship’ have created a dangerous trajectory that  will shape the Cold War 2.0 which will be much worse than its earlier Avatar . Having been a boxer only thing I can say is if you trade punches some one is going to get a bloody nose. Who in this case remains to be seen!

This article was first published in The India Observer as Diplomacy Unwound China and Pelosi in Taiwan on 10 August 2022.