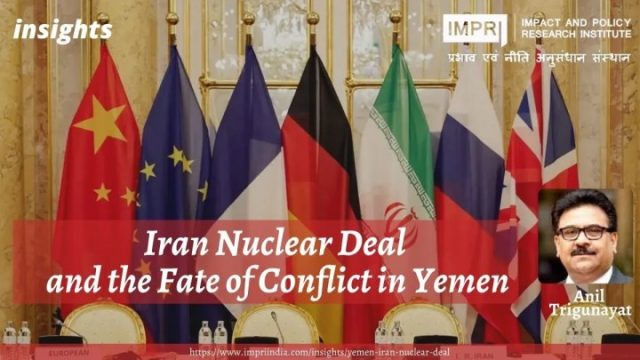 The Houthis have been at war with the US-backed Saudi-UAE-led Sunni coalition of nine countries since 2015 when they chased the Abd Abu Mansour Hadi government out. This led to much consternation in Saudi Arabia, which was already upset by the US rapprochement and the nuclear deal with its arch-rival Iran.

The Saudi leadership felt short-changed as the Obama Administration was hellbent on normalizing ties with Tehran. Apart from Riyadh, Tel Aviv let alone Abu Dhabi, was unhappy with Obama’s outreach to Iran.

The powerful Sunni regional powers wanted to flex their muscles by taking on the Iranian-backed Houthis in their backyard while proving a point to the Americans. As such the coalition was worried about the AQAP (Al Qaeda of Arabian Peninsula) becoming emboldened in its vicinity.

The Yemen war was expected to be short and swift, but like all others, it has become seemingly unending, despite the Saudi’s offering a truce and political solution. The UAE which had backed the Southern Transition Council in Yemen has actively tried to disengage from the war, as the two protagonists, Riyadh and Abu Dhabi, began to appear at cross purposes given their regional ambitions in the conflict zone of Yemen, which the Iranian media termed as ‘deception in retreat from Yemen’. But the Houthis continued to target the infra-facilities and key installations in Saudi Arabia even crippling its major oil facilities in 2019 despite the US patriot missiles cover– a scary scenario indeed. Such attacks have continued unabated.

On January 17, under the so-called ‘Operation Hurricane Yemen’ the Houthis (Ansarullah) launched an attack with missiles and drones against the Abu Dhabi National Oil Company’s facilities at Mussafah killing two Indians and one Pakistani. The Foreign Minister of UAE spoke to his Indian counterpart Dr. S Jaishankar condoling the deaths and assuring the welfare of Indians who constitute the largest Indian diaspora in the Middle East.

Some people were injured at the Al Dhafra airbase ( where US and French forces are also based), and  AP reported a fire at the  Abu Dhabi international airport. The same night, Saudi Arabia also confronted several missile and drone attacks. The intractable Houthi machine is going strong despite severe losses and an unprecedented humanitarian crisis in war-torn Yemen. Saudi and allied forces responded, as expected, by more bombing, resulting in 80 or so casualties. Who teaches a lesson to whom is unclear as the outcome remains suspended and uncertain!

Houthis had taken over key areas of Yemen’s oil-rich Shabwa province in September without much resistance,  but Saudi backed and UN-recognized government of President Hadi reclaimed the three districts of Bayhan, Ain, and Usaylan and forced them to retreat to Marib and Bayda areas that itself has been the major battleground for the two sides for months now.

The UAE, which had significantly disengaged from the war in Yemen is propagating a political solution. But the Houthis have accused it of continued intervention and attacks through the highly trained and well-funded Giants Brigades (Al-Weyant-al- Amaliqa).

Hence, it wanted to convey a message that the UAE was not safe, and neither was Saudi Arabia, whose key installations have been targeted during the seven-year war. These unbridled intrusions and attacks can have a psychological impact on the international community’s an investment and engagement plans as it dents the ‘safe destination’ image of UAE.

In any case, if the drones and missile strikes can penetrate the heavily fortified air space with high tech surveillance, a complete review will be warranted by the regional majors who have suffered the brunt of Houthi attacks which can no longer be discarded as a ragtag militia group.

These attacks have been condemned by the international community including India. UAE joined the UNSC as a non-permanent member earlier this month. In a Press Statement, UNSC not only condemned the terrorist acts claimed and committed by the Houthis, but also underlined the need to hold perpetrators, organizers, financiers, and sponsors of these reprehensible acts of terrorism accountable and bring them to justice urging all states to cooperate with UAE.

Earlier on January 9, UAE in a letter to UNSC asked for the Houthis to be redesignated as a terrorist group as it had indulged in piracy by capturing a Rawabian vessel with a UAE flag -threatening the freedom and security of navigation and international trade in the Red Sea and endangering the regional security and stability. While Houthis claimed that the ship was carrying military equipment, the Arab coalition insisted that it was carrying field hospital and medical equipment.

The US and UN have been hopelessly aspiring to find a political solution which even the embattled Riyadh wishes to achieve, as the winnability of the war remains questionable. Both UAE and Saudi Arabia have gradually started rapprochement with Tehran, which is expected to steer the Houthi leadership towards a political engagement of all stakeholders. Although it is assumed that Iran has significant control over the Houthis, how much leverage Tehran can exercise will also depend on the ongoing Vienna Talks on the JCPOA (Joint Comprehensive Plan of Action- the nuclear deal).

Recently the Emirati National Security Adviser was in Tehran to meet the hard-line President Ebrahim Raisi and his counterparts.  Raisi is likely to visit Abu Dhabi shortly unless the situation sparks another rift –diplomatic or otherwise.  As such, with Iran, the UAE has been pursuing the moderate approaches of continued economic engagement and calling out when things go a bit far.

Saudi Arabia and Iran also have had four rounds of talks and three Iranian diplomats have joined their representation to OIC and Riyadh. These are all good signs, but the road is quite slippery and filled with a trust deficit and inherent competition for regional geopolitical space as the US is being perceived no longer as a reliable security guarantor.

A lot will depend on the outcome of the difficult JCPOA negotiations, as Iran tries to project an image of a strong rival to the USA. However, it is unlikely that the ongoing reconciliation efforts will be derailed as that would entail a much greater risk of conflagration.

When he took over, President Biden had promised to end the war in Yemen and now acknowledges that it is very difficult to end it. He is also not averse to the idea of redesignating the Houthis as a terrorist group from which earlier a reprieve was given to them to allow efforts for a political solution between the intransigent opponents.

More violence and attacks could be in the offing as the situation becomes murkier which Hans Grunberg, UN Special Envoy on Yemen, avers that the country was increasingly disintegrating politically, economically, and militarily, underscoring  that “the conflict is entering a new cycle of escalation.”

First published in India Narrative Will the conflict in Yemen end only with the signing of the Iran nuclear deal? on 29 January 2021.