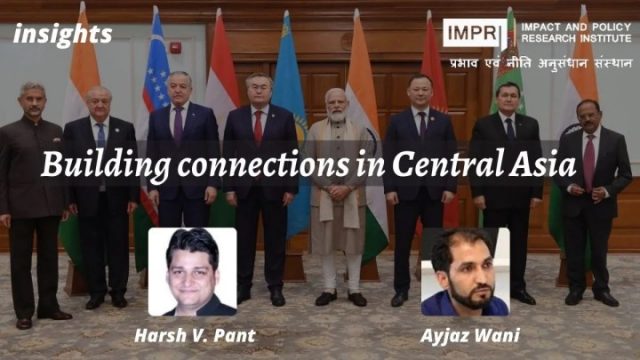 Since 1991, New Delhi’s ties with the Central Asian countries have developed slowly despite a shared culture and trade links via the ancient Silk Road

The first virtual engagement between Prime Minister Narendra Modi and presidents of the five Central Asian countries on January 27 comes at a time of widening security faultlines in Eurasia and common geostrategic and geoeconomic challenges from a volatile Afghanistan for both India and Central Asia. The global power contestation in Central Asia has only added to the significance of the summit this week. Given the global power rivalry in the Central Asian Republics (CARs), New Delhi unveiled the Connect Central Asia policy in 2012 to further strengthen its geopolitical, geo-economical, and geocultural relationship with the region.

Since 1991, New Delhi’s ties with the Central Asian countries have developed slowly despite a shared culture and trade links via the ancient Silk Road. The emergence of the nation-states with differing ideologies and the partition of the Indian sub-continent during the 20th century posed challenges to New Delhi in connecting directly with the region. Subsequently, in the post-Cold War period, India gave greater emphasis to the region, called “the global chessboard”, through its extended neighborhood policy.

Then prime minister Narasimha Rao moved quickly to establish a diplomatic presence in the region and visited Uzbekistan and Kazakhstan in 1993, followed by Turkmenistan and Kyrgyzstan in 1995. New Delhi signed the Strategic Partnership Agreements with Kazakhstan, Tajikistan, and Uzbekistan to stimulate defense cooperation and deepen trade relations.

Given the global power rivalry in the Central Asian Republics (CARs), New Delhi unveiled the Connect Central Asia policy in 2012 to further strengthen its geopolitical, geo-economical, and geocultural relationship with the region. However, Pakistan stonewalled New Delhi’s approach and disallowed India’s passage through its territory. Islamabad continued to create roadblocks under Beijing’s influence to keep India at bay in Central Asia. Beijing took advantage of the situation and unveiled its much-hyped Belt and Road Initiative in Kazakhstan.

India continued to work to find the solution to its connectivity conundrum. New Delhi signed a memorandum of understanding with Iran in 2015 to develop the Chabahar port in the Sistan-Baluchistan province that was in the doldrums from 2003. Most of the Central Asian nations view India’s Chabahar port as an opportunity to diversify their export markets and to control China’s ambitions. In the same year, Mr. Modi visited all the Central Asian countries. The visit marked India’s diplomatic shift for the first time to look at the region as a composite geographical unit.

Eventually, the region also became the link that placed the Eurasian region firmly in New Delhi’s zone of interest. Reciprocal high-level state visits by the presidents of Tajikistan, Kyrgyzstan, and Uzbekistan after 2015 set the tone for strengthened India-Central Asia dynamics through bilateral and trilateral arrangements. Both sides sought cooperation in defense and military technologies, money laundering and also established a joint counter-terrorism working group.

Most of the Central Asian nations view India’s Chabahar port as an opportunity to diversify their export markets and to control China’s ambitions.

In 2019, at the India-Central Asia dialogue, India’s then external affairs minister Sushma Swaraj remarked, “We (India-Central Asia) are bound together through a shared history, cultural linkages, and common habits and traditions.” The third India-Central Asia Dialogue was recently held that coincided with the meeting of the foreign ministers of the Organisation of Islamic Countries hosted by Pakistan. The foreign ministers opting to visit New Delhi instead of Islamabad reflected the increased convergence between Central Asia and India not only in newer areas of cooperation but also in dealing with new security challenges emanating from the coming back to the power of the Taliban in Afghanistan.

There are concerns that pan-Islamic groups will gain ground support from the new regime in Afghanistan and with the Taliban itself working in close tandem with Pakistan-backed militant groups, there are chances the trouble could spill over into India. This concern is also shared by the CARs, as Tajikistan, Turkmenistan, and Uzbekistan share a 2,387-kilometre-long porous border with Afghanistan.

The presence of more than 10,000 foreign fighters of al-Qaeda, ISKP, Lashkar-e-Taiba, Jaish-e-Mohammed, Islamic Movement of Uzbekistan, Islamic Jihad Union, Jamaat Ansarullah, has worried both the CARs and New Delhi.

At the recent Collective Security Treaty Organisation summit, Tajik President Emomali Rahmon claimed the presence of 6,000 terrorists near its southern border. Furthermore, the presence of more than 10,000 foreign fighters of al-Qaeda, ISKP, Lashkar-e-Taiba, Jaish-e-Mohammed, Islamic Movement of Uzbekistan, Islamic Jihad Union, Jamaat Ansarullah, has worried both the CARs and New Delhi. Except for ISKP, these terror groups on Afghan soil will support the Taliban as they renew and rejuvenate the idea of establishing the Caliphate from Afghanistan to the European border.

The porous borders and the reactivated terror outfits will have a significant impact on regional security. With a view to counterbalance the influence of an ever more assertive China, the CARs have admitted New Delhi into the Ashgabat Agreement, allowing India access to connectivity networks to facilitate increased trade and commercial interactions.

Russia also considers India’s presence in the region as a buffer to the growing Chinese influence and prevents the southern part of the CIS from coming under Beijing’s undivided dominance. Central Asia has remained pivotal to geopolitical transformations and the India-Central Asia summit will help both New Delhi and CARs to galvanize efforts for regional peace and stability. New Delhi’s sustained efforts can lay the foundation of a robust bilateral engagement with pivotal geography at a time when the two need to work more closely than ever.