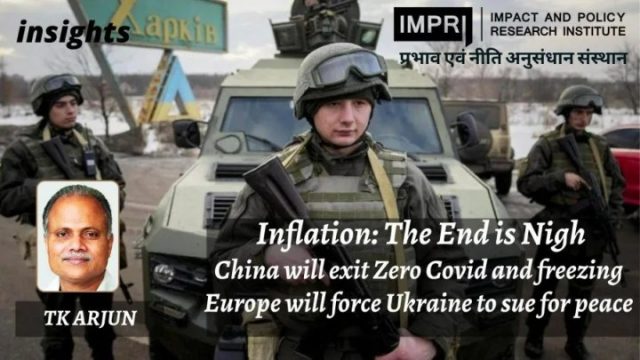 Governments in Europe are asking their citizens to brace for rolling blackouts and interruptions in gas supplies to heat homes, reports The New York Times, which adds that Germans are also stocking up on candles. Sounds grim, right? Wrong. This spells the beginning of the end of the war in Ukraine.
This column had predicted (bit.ly/3F7AaDP) back in July that this winter would witness two developments with a significant bearing on global inflation: China would modify its zero-Covid strategy after the Chinese Communist Party (CCP) congress, and the war in Ukraine would come to a head, with Russia targeting Ukraine’s energy reserves.

Cracks in the Great Wall

After the CCP congress, China introduced 20 tweaks to its zero-Covid strategy even before widespread anger against mass lockdowns and testing began transmuting into political protests, after which additional relaxations have been introduced. The protests, however, impede a smooth exit from the strategy, which needs time in which to vaccinate the elderly and stock up on effective anti-viral medicines for Covid-19. Rushing the exit from zero-Covid could, indeed, cause infections, desperate searches for vacant ICU beds, and deaths to spike.

CCP has faced, and put down, mass protests before. But, in 1989, there were no social media. Today, Chinese social media is ubiquitous enough for word to get around, leaking through its shroud of censorship. And anger against indiscriminate lockdowns, mass testing, and constant surveillance through phone apps grips all sections of society. Migrant workers living hand-to-mouth are the worst hit by prolonged lockdowns.

So, protests are likely to grow, and they would be suppressed, even as the authorities move on to vaccination and procurement of anti-virals. From this experience, the Chinese would learn to identify the freedom they lack – before the lockdown, they were free, sort of, to have a good life – as the freedom to determine the limits to their freedom, political freedom, in other words. That is corrosive to China’s totalitarian regime in the long term.

It is part of Russian lore that the invasions of Sweden in 1708, Napoleon in 1812, and Hitler in 1941 were foiled, in part, by the severity of Russia’s winter. The frost killed soldiers, disrupted supply lines, and depleted morale before the Russian army struck.

Putin has mobilized Gen. Winter for his war in Ukraine. The Russians have been attacking and destroying Ukraine’s energy infrastructure. Ukrainians suffer long blackouts, whose effects would turn worse as winter deepens. But, rather than Ukraine, Russia’s energy target is likely to be Europe.

Russian gas still flows to Europe by multiple pipelines – the Yamal, which reaches Germany through Belarus and Poland, the Brotherhood and Soyuz pipelines that run through Ukraine, merge to form a single pipeline that enters Slovakia, where it forks, one branch going to Germany via the Czech Republic and the other to Italy via Austria, and the TurkStream and the Blue Stream, both underwater pipelines through the Black Sea that deliver gas in Turkey. Only Nord Stream 1 to Germany is totally out of commission.

Gen Winter Rides Again. Choking the supply of gas through these pipelines offers Russia multiple gains. If Ukraine retains a larger share of the reduced supply through its territory for its own desperate needs, that would spark a row with its downstream neighbors. Gas along the Yamal flows from Germany to Poland, and Reuters reported a fall in that flow early in November. Winter promises to be severe in Europe, and gas is in short supply. Whenever downstream recipients see their gas supplies shrink, upstream nations would be suspected of hogging the gas.

This would add to the tensions in Europe, where anger against high prices has triggered political upheavals, leading to the mainstreaming of right-wing politics in Italy, Sweden, and France, strikes for higher wages that promise to entrench inflation and depress growth, and persistent demands for fuel subsidy. As winter deepens and energy privation heaps misery on European citizens and their fiscally challenged governments, the pressure would mount on European capitals to bring the war to an early end.

Ukraine inherits the heroic tradition of struggling through extreme adversity to finally prevail – which saw the Russians through in the punishing sieges of Leningrad and Stalingrad during World War 2. German defeat in Stalingrad is widely accepted as the turning point in the war. Ukraine would be willing to fight on, even in the cold dark of a winter devoid of power. Not so it’s European backers. Freezing cold is likely to help them see through the claim that helping Ukraine is the only way to prevent Russia’s invasion of Europe.

As Europe discovers it is invested in defanging Russia as a major power way less than in their own immediate and future well-being, it would force Ukraine to the negotiating table, with US backing. The war is unlikely to last beyond peak winter

This article was first published in Economic Times as View: China will exit zero-Covid, and energy-starved Europe will end the Russia-Ukraine war on Dec 7, 2022.