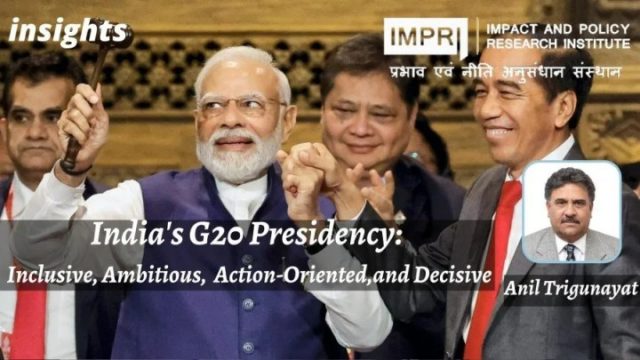 On December 1, India assumed the presidency of the highly influential global grouping of major world economies- G20 from Indonesia for one year.  These are unprecedented times with unprecedented challenges caused by the Covid pandemic and the Russia-Ukraine war whose continuing incidence may be a dampener as well as an opportunity for India to change the global discourse.

The Indonesian presidency was beset by these problems too which were manifested in their theme of ‘Recover together, Recover stronger’ and the fact that eventually despite Russian and Chinese objections the ‘Bali Declaration’ was issued is a major achievement. India played a major role in bridging the divide which has been widely acknowledged.

During, 2023  India has chosen the theme of globalism and human-centric globalization as Prime Minister Narendra Modi passionately articulated ‘ India’s G20 agenda will be inclusive, ambitious, action-oriented and decisive. Let us shape a new paradigm of human-centric globalization ‘. This is clearly imbibed in the logo and the theme of ‘Vasudhaiv Kutumbakam’ reemphasizing the oneness and harmony among humankind with ‘One World, One Family and One Future’ which are so much needed at this time when the global order is under tremendous stress.

India’s own track record during these prevailing geopolitical challenges has been exemplary with words and actions being the same. During the pandemic, despite the need to subserve her own population comprising 1/6th of humanity, India went for the human-centric approach with its ‘Vaccine Maitri’ and ‘medicine diplomacy’ to reach out with vaccines and essential supplies from the USA to Uganda.

No wonder the then President of Brazil ( and next host of the G20) called it ‘Sanjeevani’ the lifesaving drugs. More importantly, India advocated the suspension or waiver of the IPR (Intellectual Property Rights) so that the vaccines could reach the needy in a timely and efficient manner. During her, Presidency India wishes to be an effective voice for the ‘Global South as it has been doing all along.

Likewise, India’s principled position on the Russia-Ukraine war and on the Afghanistan crisis, while it is in the UNSC as a non-permanent member, for peace, dialogue, diplomacy, and respect for UN Charter, sovereignty, and territorial integrity have remained consistent and value-based while serving her own national interests. Despite the Galway incident and border tensions with hegemonistic China, New Delhi has preferred the route to diplomacy and dialogue to resolve the bilateral issues with China, while urging and advocating respect for rule of law and freedom of navigation in the Indo-Pacific and elsewhere.

The G20, representing 85% of global GDP, 2/3rd of the world’s population, and 75% of trade, has emerged as a major instrument of global decision-making while regrettably, the UN‘s role is becoming stunted and archaic. UN, without reforms, may become only a talk shop and anachronistic to meet global challenges of a newer as well as older kind. Lamenting about issues only is no response.

Therefore, for India, which has been a part of G7+, for several years and also part of cross-cutting important organizations like QUAD, BRICS, SCO and RIC, JIC, etc., the G20 Presidency provides an opportunity to change the global narrative and to steer the vitriolic and selfish approaches of the majority towards a benign and welfare oriented inclusive international effort. No mean challenge that is since the powers are infested by the Zero-sum mindset. Again as PM Modi wrote in his op-ed “ Can we catalyze a fundamental mindset shift to benefit humanity as a whole “.

It will be a task cut out as India will reassemble the G20 in totality despite the ongoing Eurasian conflict and Sino-US tensions let alone India’s own challenges in her neighborhood. And India appears well-placed to do that.

Besides, in 2023 India will be hosting the Shanghai Cooperation Organisation (SCO) and India Africa Forum  Summits that will encompass other diverse but important actors. One of the key achievements for India could be to include more African nations in the G20 orbit and more importantly if it is able to persuade others to include African Union ( AU) as a permanent member converting G20 into G21 in the 21st century.

As such India, as a host country,  has specially invited some of her key partners like Bangladesh, Egypt, Mauritius, Netherlands, Nigeria, Oman, Singapore, Spain, and UAE. Besides the UN, World Bank, IMF, WHO, WTO, ILO, and some other regional organizational heads i.e. ASEAN, New Delhi will have the Asian Development Bank, international solar alliance, and Coalition for Disaster Resilient Infrastructure among others which clearly reflect the commitment to mitigation focus on climate change while working on increased and equitable climate finance and transfer of green technologies so that ‘green apartheid ‘ could be addressed forthwith.

India has taken the exceptional lead in the fight against climate change through her commitments to renewable energy and other laudable initiatives like LIFE for Environment while ensuring a credible trusteeship and global ownership of nature.

In any case, all such initiatives and over 250 planned interactions across India from Kashmir to Kanyakumari for thousands of delegates in various verticals will feel a flavor of India and her soft power through the year in the run-up to the Summit.

Digital transformation and infrastructure, as well as equitable digital infrastructure through ease of access to technologies and bridging the digital divide, are being espoused especially for the developing world since for the AI-driven Industrial Revolution 4.0 these are the common denominators and must be provided for. India, having become a knowledge economy and IT superpower has the requisite heft to make it a reality with the G20 partners, even though it is an uphill task given the protectionist nature of the international discourse and unwillingness of the rich countries to go the extra mile. India‘s economic and democratic dividends and experiences in digital outreach and inclusion could help alleviate the situation and provide acceptable solutions.

Finally, some mechanisms will have to be globally agreed upon at the G20 so that the weaponization of global goods and commons can be averted in the future. PM Modi again hit the nail on when he wrote ‘ For promoting harmony within the human family, we will seek to depoliticize the global supply of food, fertilizers, and medical products so that geopolitical tensions do not lead to humanitarian crises… through healing, harmony, and hope ”.

As for Russia Ukraine war, a solution will have to be found to end the conflict since this is not an era of war but wars are still being inflicted by the unabashed geopolitics and irresponsible behavior of superpowers. Everyone knows this imperative and that without acting together and remaining in myopic confrontational silos we cannot fight these global challenges which are threatening our very existence.  How will it be achieved and enforced remains to be seen? Time to wake up since consensus is the keyword in G20 parlance.

This article was first published in The India Observer as Diplomacy Unwound India’s G20 presidency towards Human-centric Globalization on Dec 7, 2022.