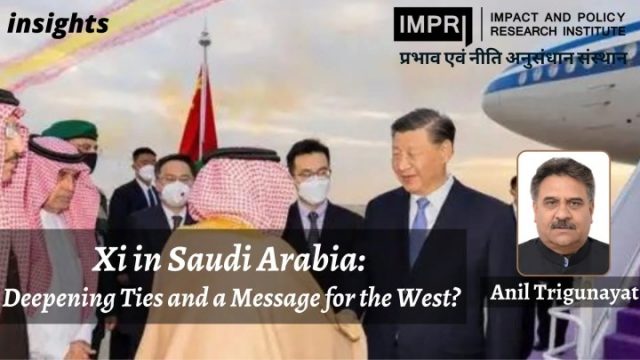 President Xi Jinping is visiting Saudi Arabia from December 7-10 for his second bilateral visit to the Kingdom since 2016, when he visited Cairo and Tehran as well in an epoch-making and biggest-ever Chinese diplomatic initiative in the Arab world. Xi will also be attending the flagship events of the China-Arab Forum and China-GCC Summits, where thirty Arab and Gulf leaders will be participating. Forty new trade agreements and MoUs worth at least $30 billion are expected to be signed during these events. This will also lead to an upgrading of an already existing comprehensive strategic partnership between Riyadh and Beijing.

The Chinese premier, who has been elected to a third term, will reiterate China’s commitment to the region as he will confer with the ‘Custodian of two Holy Mosques’ King Salman, and the newly appointed all-powerful Crown Prince and Prime Minister Mohammed bin Salman

Since the Saudi leadership now refocuses on Vision 2030 and diversification of the economy and security while expanding their ambit of mutually beneficial partnerships, an agreement encompassing Saudi Vision 2030 and Chinese BRI has also been envisaged

China has successfully waded through and entered into strategic partnerships with major countries in the region already. Its Belt and Road Initiative (BRI), Digital Silk Road, and Health Silk Road initiatives and outreach have encompassed from Tehran to Tel Aviv to Riyadh by skirting around their intra-regional conflicts and competition. No wonder several major leaders were there for the Beijing Olympics in February.

Most Arab leaders currently consider China as an important and reliable alternative and partner in their Act East policy pursuits as most of them are now trying to pursue and assert their strategic autonomy and ‘Zero problems’ policies with neighbors and beyond.

This was evident during the Russia-Ukraine crisis when most of them refused to participate in sanctions against Russia or go against Moscow’s interests in the OPEC+, adding much to the chagrin of Washington DC. But the overall relationship with the US remains a sought-after anchor for nearly all the countries in the region barring Iran and Syria even as some concerns have cropped up.

China is the largest trading partner and the biggest oil importer of Saudi Arabia accounting for nearly 18 percent of oil imports that account for over 75 percent of total Chinese imports from Saudi Arabia. Energy interests accompanied by infrastructure and technology push will also continue to anchor China’s relationship with the region with expanding horizons unlike in other sections of the BRI.

As such, Chinese company CEEC is building a 2.6 GW solar power station in Al Shuaiba which will be the largest in the Middle East. Moreover, they are also working in countries in Central Asia and Africa. The Saudi ACWA Power has jointly invested $1 billion in a gas-fueled power plant in Uzbekistan under the BRI projects. Remarkably the  GCC-China trade has also doubled during the last decade.

Secured energy transit and supplies remain major Chinese objectives in the medium term. Trade and investment ties remain an important pillar of its relationship with the region. GCC, with which an FTA is languishing, does want FDI and technology arrangements that will help their economies to integrate into global value supply chains including in the post-oil era.

Chinese Huawei has been actively creating 5G tech infrastructure in the Gulf states despite US and Western concerns. Extensive Displays, at the DOHA FIFA world cup, of Chinese companies are a testament to the growing ties. Ali Baba has tied up with a Saudi group for cloud services. Chinese companies are also pretty active in the $500 billion NEOM dream project of Crown Prince Salman.

Until now, the US has been perceived as the sole security guarantor for many in the gulf region especially the GCC countries with several military bases. It is also likely to play that role irrespective of the perception that America has become self-sufficient in hydrocarbons and has actually become a competitor for the oil-rich gulf countries. Furthermore, the perception is that the USA is retrenching from the region to focus on the new China challenge in the Indo-Pacific.

So far Beijing has tried to avoid large-scale security cooperation leaving that role mainly to the US and remaining under the radar. But as its economic footprint deepens in the region, Beijing would be happy to exploit the relationships and infrastructure for catering to its security and strategic requirements that it has silently created over time in the region.

Investment for developments in critical and strategic ports across the region is one such pedestal. US concerns about tech theft and surveillance in Israel and UAE may have briefly interrupted some projects but the baselines under the redlines spectrum have been chalked out. Sino-Saudi defense cooperation including in missile and drone manufacturing has been deepening and is likely to move into higher domains too.

China’s focused orientation toward the Middle East was clearly outlined in its Visions and Actions for Silk Road Economic Belt and 21st-century maritime silk road of 2015 and the fine lines of the “Arab Policy Paper’ of 2016. The paper outlines the 1+2+3 approach that entails energy cooperation and related infrastructure – (1) construction and trade and investment facilitation; (2) cooperation in innovative technologies in space, satellites, nuclear energy, and renewable energy. Specific projects have been chalked out and completed while during the pandemic the digital and health silk roads became predominant.

Saudi Arabia has already expressed interest to join the BRICS and China-centric SCO (Shanghai Cooperation Organisation) while some others are also keen to join these eastern frameworks to balance out the dependencies with the West and eke out maximum benefits. Saudi, Egypt, and Qatar have become dialogue partners of the SCO as Iran became a full member.

Several countries from GCC including Saudi Arabia are also the founding members of the China-led Asia Infrastructure Investment Bank (AIIB). China’s non-interventionist and non-prescriptive and value-neutral approaches have endeared them to regional leaders apart from their own economic interests. Consequently, Beijing has been able to neutralize any reaction from the Muslim countries to the treatment of Uyghurs in China considered an internal matter, which is a good political gain for the country.

While strategically and pragmatically the Arab and Gulf countries may not be overtly choosing sides but surely are spreading their risks and nurturing relationships with their major markets and Asian neighbors like China and India. As the global order moves out of its current transitional trajectory towards most likely in the Cold War 2.0 scenario, it remains to be seen as to how the regional satraps will eventually settle in.

This article was first published in CNBC TV18 as Xi in Saudi: Is China further deepening its economic footprint in Gulf region? on Dec 8, 2022.

Read another piece by Anil Trigunayat – Turkey’s India Outreach Needs to be Stronger in IMPRI insights.

Read another piece by Anil Trigunayat – The Gorby Factor in the Context of India in IMPRI insights.

Read another piece by Anil Trigunayat – Terrorism: An Unflinching Danger in IMPRI insights.