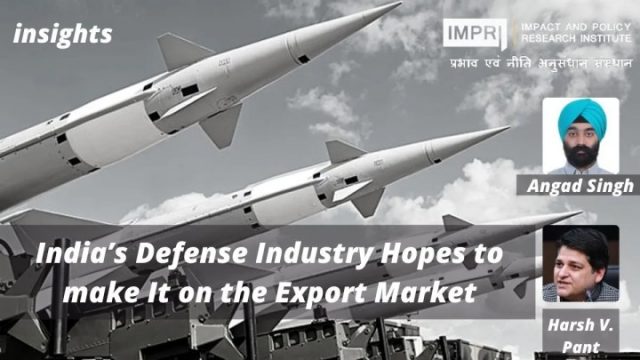 A recent sale to the Philippines is a major win, but India faces obstacles to its big ambitions.

India marked a rare milestone in January, securing a $375 million order from the Philippines to supply three coastal defense batteries of BrahMos supersonic cruise missiles, along with training and support. The weapons are the product of an Indo-Russian joint venture, which takes on further significance in the wake of Russia’s invasion of Ukraine. India remains dependent on Russia for arms transfers and abstained from condemning Russia’s aggression at the United Nations General Assembly. New Delhi faces an increasing dilemma when it comes to balancing between its defense interests and growing closeness to the West.

The BrahMos sale is nonetheless seen as an Indian success: It is New Delhi’s first major military export in years, with countries such as Vietnam and Indonesia also expressing an interest in the missiles.

The missile deal also reflects India’s impressive trajectory in the last five years. In 2017, the annual value of all defense exports was less than $300 million, according to Indian Ministry of Defence figures. By 2020, India was among the top 25 global arms exporters for the first time, according to data from the Stockholm International Peace Research Institute. More recent government figures show that India quadrupled the value of its exports between the fiscal year 2016 and fiscal year 2021, from around $275 million to $1.13 billion.

This is all due in no small part to Indian Prime Minister Narendra Modi’s focus on increasing global defense sales to bolster India’s domestic industry. Its military research and manufacturing, particularly the private sector, has struggled with limited government funding and the slow pace of acquisition. Export revenues could make up the shortfall, benefitting both the domestic industry and India’s geopolitical heft amid rising tensions in the Indo-Pacific. But there are already challenges to this strategy, including the domestic industry’s ability to meet customer requirements and export demand.

Despite the recent uptick, India’s defense exports are still lacking when measured as a share of GDP or government expenditure on defense. Viewed against the Indian government’s own ambitious targets, the arithmetic is sobering. In 2019, the Indian Ministry of Defence directed state-owned defense companies to earn 25 percent of annual revenue through exports by fiscal year 2023; this was followed by Modi’s call to achieve a target of $5 billion in exports by 2025.

Neither goal is realistic about the Indian industry’s ability to ramp up capacity to serve both domestic and foreign requirements. In the past few years, India’s annual defense export figures have actually dropped slightly, from a high of $1.43 billion in fiscal year 2019 to $1.13 billion in fiscal year 2021. The latest figure made up around 10 percent of public sector revenue, since a significant portion of exports still originate in the private sector. Similarly, exports would have to grow by more than 50 percent each year to achieve Modi’s target.

Around 60 percent of India’s defense expenditures on acquisition and modernization goes toward procurement from domestic sources. This year’s budget put this total expenditure at around $16.6 billion, which means domestic industrial capacity will generate around $10 billion worth of business in fiscal year 2023. Modi’s export target is equal to half of the entire domestic capital spent; it will be impossible to generate the excess capacity needed to meet this combined demand.

The Indian government supports inefficient state-owned enterprises that will get in the way of its ambitions while it drip-feeds the private enterprises that are best placed to make defense exports a success. Whether by design or by default, it is easier for the government to procure defense outputs from entities it owns. In a country where corruption is pervasive and politically sensitive, all transactions with private companies invite scrutiny. Therefore, ramping up to quadruple defense exports again will not be as easy as the first time.

Furthermore, India’s state-owned enterprises haven’t distinguished themselves on the export market. The highest-profile export contract before the BrahMos sale was a $50 million deal with Ecuador in 2009 for seven Hindustan Aeronautics advanced light helicopters—India’s splashy arrival on the global export market. But the sale ended in a fiasco when Quito canceled the contract in 2015 after a spate of crashes. Despite large production numbers, low unit costs, and widespread adoption by India’s military, the helicopter has since achieved little export success.

Indigenous shipbuilding, which New Delhi often touts as a success story when it comes to meeting domestic needs, has also been a disappointment. Indian warships tend to be unsuitably configured, too expensive, or both. India doesn’t even export consumables, such as ammunition. The erstwhile Ordnance Factories Service, now split into seven public sector units, has produced artillery ammunition since the 1980s, but its biggest export sale was a meager $45.75 million export contract with the United Arab Emirates in 2019.

Despite fielding competitively priced products and receiving government support, Indian state-owned defense enterprises are hamstrung by a poor impression of their ability to deliver on time and at cost. In this regard, the BrahMos deal with the Philippines is crucial: It gives India its first opportunity in a decade to change this negative brand. A smooth entry into service will pave the way for other weapons systems enthusiastically adopted on the home front, such as the Akash surface-to-air missile and Pinaka rocket artillery, to be serious contenders abroad.

But even if the public sector units can achieve their export targets in record time, they will still contribute less than half of the government’s defense export goal. India will simply have to look beyond state-owned companies and shift support to private enterprises. The fledgling private sector already punches above its weight: A state-owned TV channel noted in 2020 that 95 percent of the fiscal year 2019’s $1.2 billion in defense exports came from the private sector, primarily boosted by their work in defense offsets—that is, the contractual requirement for a seller to procure a certain number of goods or services from the buyer.

If the government creatively deploys fiscal policy, defense offsets, and capital spending to enable more rapid growth in the private sector, the effects on defense exports will be outsized. New Delhi seems to have a new willingness to work toward a cohesive defense exports policy; the BrahMos sale points to it, taking new strides in this direction. It has taken major policy reforms to take annual Indian defense exports past the $1 billion mark; to reach the $5 billion mark, the Modi government will have to focus on major fiscal and industrial reforms.

This article was first published in the Foreign Policy as Can India’s Defense Industry Make It on the Export Market? on 9th March 2022