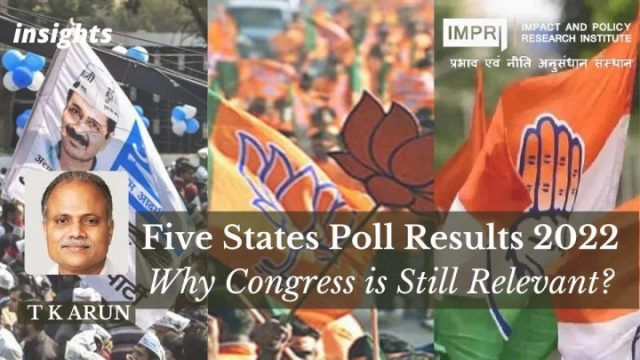 The Congress’s inclusive vision for a democratic India is the only alternative to descent into a disorder that is the logical culmination of the BJP’s sectarian agenda,

It is easy for Democrats and liberals to slip into despair, in the wake of the recent Assembly election results.

The BJP dominates the polity, and its politics permeates the Aam Aadmi Party, the only other party to have tasted success in the elections. Those who rush to lionize Kejriwal and anoint him the only viable opponent against Modi in 2024 would do well to remember his refusal to take a stand on the Citizenship Amendment Act or minority rights in general,

His fiscally irresponsible populism and cluelessness on questions such as where India should stand on Russia’s invasion of Ukraine, not to speak of the ease with which he slips into a culture where it is but natural for an entire council of ministers to assemble for puja at a temple and broadcast their collective rituals live to voters.

The dominance of the BJP, spanning social hierarchies and India’s vast geography, is a cause for concern but not for despair. The biggest challenge to the BJP in these elections came from the Samajwadi Party (SP), which tried to expand its social coalition beyond Muslims and Yadavs, to include several backward castes, to exploit popular discontent against the Yogi government.

There was much for the people to be unhappy about. The revelation that demonetization did not dent black money as promised but only served to deliver a financial shock that destroyed millions of small businesses and livelihoods, the unplanned lockdowns in the wake of COVID that deprived migrant workers of income, and thereby, of shelter and food,

forcing them to travel hundreds of kilometers on foot back to where they had come from, the delay in procuring COVID vaccines that cost tens of thousands of lives, ill-prepared hospitals that sent people gasping to death, crammed crematoriums, leading to burials in shallow graves along the Ganga that gave up their contents to the river,

where the bodies bloated and bobbed in putrid testimony to the efficacy of governance under Yogi Adityanath’s rule. The arrogance of the ruling BJP politicians manifested in a Union minister’s son driving his motorcade into a bunch of protesting farmers in Lakhimpur Kheri.

Why did voters not display their anger against the BJP’s misrule by voting for the SP, or some other party? When in power over 2012-17, the SP had patronized criminal elements who had made the lives of ordinary people miserable. When Yogi says he has made the streets safe for women to walk on, he has purchased.

Given the mistreatment of minorities in Uttar Pradesh, with special laws, vigilante justice, and police highhandedness, given the misery people have suffered during COVID and afterward, given the failure to create jobs, would not the people of Uttar Pradesh vote for an alternative, given a credible alternative?

There was no credible alternative. The BJP talks of national glory, progress, and welfare for all. Its government walks the talk on welfare. Some large poor families have collected free grain by the quintal. Many get small sums credited to their bank accounts. Some have got houses built for them, yet others, tap water at home.

The discourse with the SP, BSP, and assorted small parties has been about championing certain identity groups, without any material evidence to support their claim from their time in office. People are fed up with sectarian promises that are not kept and are tempted by visions of national progress the BJP holds up, with their own state playing a leading role in it.

Indeed, the BJP has been giving national progress a communal gloss, and that does appeal to a section of voters. But in the case of the Opposition, all it could lay claim to was a negative vote — let those who want to vote out the Yogi government vote for us.

In an increasingly globalized world, voters do not see the leaders of family-led regional parties as leaders of the nation, whereas Modi makes it a point to address his domestic audience whenever he forays abroad, reinforcing his image as a leader on a par with leaders of other countries.

In the absence of any wholesome alternative, voters have plumped for the BJP for the most part, even as considerable numbers still voted for the SP to register their protest at the BJP.

The one lesson political parties must learn from the Uttar Pradesh elections is that stitching together caste coalitions as a surefire strategy to win a popular appeal is yesterday’s game. People look for a credible, positive agenda. No one is going to shun patronage, but the promise of patronage for some select groups causes more affront than generates support.

Yet, there is one party that could have presented the people with a broad-based vision of inclusive growth and development, of leading India to prominence in the comity of nations, of leading the nation’s scientific and technological advance, of creating jobs, and reducing poverty: the Congress.

The party has done all this, while in office. The party stands, in theory, for building an inclusive society, a non-denominational, integrated nation, for strategic autonomy in a world of big powers, for broad-based prosperity at home.

But it has no one to take credit for past its achievements, no credible face to carry conviction about future promises. It has no functional presence among the people, and crops up only during elections, like weeds after a good shower of rain.

A political party’s electoral performance depends a great deal on its leadership, especially when it is on a weak wicket. But is a party the same as its leaders? No, the party is far more than its current crop of leaders. It has a history built on the work and sacrifices of multiple generations of loyal party workers. It has a vision, and a program, that has informed national policy and built its destiny, and retains the potential to energize the people to resist the ongoing subversion of democracy and enrich it further.

For the party to draw on the innate strength of its genetic code and regain its vigor, it must dump its current bumbling leadership.

On his fifth journey, Sinbad the Sailor finds himself shipwrecked on a small island, where he falls prey to an old man of the sea. Sinbad gives in his plea to carry him over a short distance and lifts him onto his shoulders, where the old man locks Sinbad’s neck in a vice-like grip between his knees, refuses to get off, orders him to go hither and thither, and tires him almost to death.

The Gandhi siblings are like the Old Man of the Sea, choking the life out of Congress. Not just the Group of 23, all well-wishers of the party, must get together to remove this unelected burden from the party’s shoulders, find new leaders and revive the party.

The party must function round the year, working for the people, with the people, to secure their rights, drawing vitality from constant political action that is centered on empowering the people, rather than on elections.

The party exists, although it is weakening. What it needs to do is to dump its Old Man of the Sea that cripples morale and instigates group fights when the party can least afford it, mistakes making statements for political action, and deems leadership to be a genetic trait rather than an acquired attribute.

The nation needs a democratic alternative to the BJP, with a vision for the nation that embraces all of society, rather than particular castes, communities, or regions. Congress is that alternative. The UP results show that sectarian agendas have lost their viability. The nation needs the Congress’s original vision and is ready for it — if only the present ‘leadership’ of the party would get out of the way.

This article was first published in the Federal as Why the Congress is still relevant, vitally so on 12th March 2022