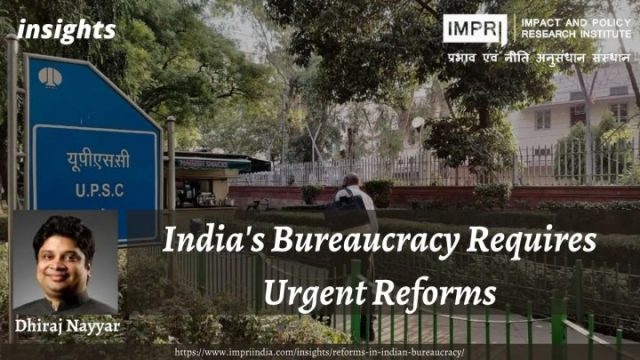 The merging of the Amar Jawan Jyoti at Delhi’s British-built India Gate with the Eternal Flame at the recently constructed National War Memorial a few hundred metres away has generated a loud debate on the legacy of colonial rule.

There is nothing wrong with revisiting legacies; no nation can be forever a prisoner of its history. The one legacy of the British Raj which continues to have a hugely consequential say on India’s present and future is the Indian Administrative Service (IAS), which underwent a change in name (from Indian Civil Service/ICS to IAS) post-Independence but little change in substance.

Now, as the Centre and states do battle over a change in rules for IAS officers—both want a larger share of the country’s elite administrators—it may be worthwhile to revisit the purpose and role of the IAS, 75 years after Independence.

The logic of a generalist, all India service made sense for the British as the main purpose of the colonial government was to control a vast and diverse country through a coherent and efficient (from their point of view) system of administration. Post-Independence, the value of the IAS was reemphasised by none other than India’s first Home Minister, Sardar Patel, who described it as the “steel frame”, which would hold united a partitioned, impoverished, diverse and democratic country while also setting the wheels of development in motion.

It would be reasonably safe to argue that, for both the British and the early governments of Independent India, preservation and control came first, welfare second and economic growth a very distant third. The instinct of preservation (of the status quo) remains embedded in the DNA of the career bureaucracy.

This explains both India’s relative success post-Independence—in terms of continued democracy, territorial integrity, steady economic growth without implosion—as also its failure—to attain spectacular economic growth, to have a world-class manufacturing base, to raise sufficiently its human capital levels. The system of government is simply not designed to disrupt or take risks.

The debate on civil service reform often gets overtaken by lateral entry, a clear point of resistance for the career bureaucracy. But a holistic discussion requires an understanding of what roles an IAS officer performs over her career. Very broadly, and for the sake of simplicity, these can be broken into three, each lasting around a decade.

In one decade, usually, early in their careers, IAS officers do precisely what they are trained for administration. As SDM/DM or ADC/DC of one of India’s 700-plus districts, they are responsible for law and order and for the administration of all the relevant government (Centre and state) social and economic programmes on the ground. In the second decade, officers are posted in state capitals where they do a mix of implementation and policy design.

Unlike at the district level where they are akin to all-rounders, in state capitals, they go to a ministry and are responsible for implementing schemes and designing state-level programmes in one sector. A third decade is spent at the Centre—as Director, Joint Secretary, Additional Secretary and Secretary—in ministries framing policies and working on regulation.

This work is substantially different from administration/implementation. Career progression through these different roles is not linear, so officers go back and forth from district to state, and from state to Centre.

There is no doubting the abilities of IAS officers, all of whom have to sit through very competitive examinations to get in. But it could be the case that some have greater competence in administration while others have greater competence in policy and the third set in regulation. And in today’s highly complex and specialized world, individuals may have a talent for different types of policy: telecom is different from agriculture, which is different from trade.

So, at the very least, it may make sense to divide the IAS into different streams: administration, policy and regulation. India is moving increasingly towards a full-fledged market economy, so jobs at the Centre require policy and regulation experts. Administrators would instinctively look for a larger role for the government, which may be counter-productive.

It may make sense to divide the IAS into different streams: administration, policy and regulation.

But the country needs competent administrators who can address the gaps that exist in physical and social infrastructure on the ground. And regulators need to know how to keep an arms-length from line ministries and perform their tasks with some “independence”. The three should not overlap. It isn’t just about skillsets but also a conflict of interest.
Of course, there remains a strong case for an elite cadre of career civil servants. Lateral entrants can complement but not necessarily replace them. The country can actually have many more IAS officers, but they must specialize and train for the appropriate stream from the start of their careers. That would be a welcome merger of the IAS and 21st century India.

First Published in the Sunday Guardian Live titled Indianise this other British legacy on 29th January 2022.