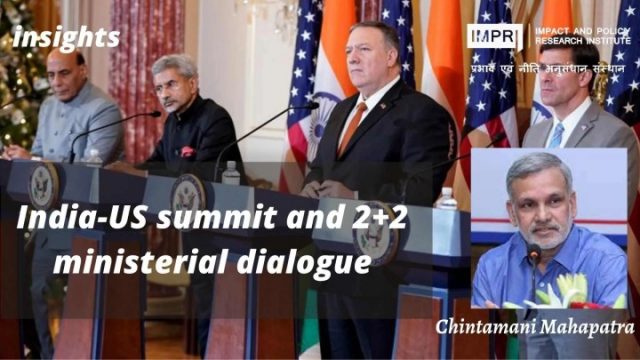 Russia, China, Pakistan, and the American allies in Europe and Asia were eagerly following the developments. But the outcome of the summit and the 2+2 dialogue appears to have disappointed them all

The international community waited with anxious moments for the outcome of a virtual summit between the Indian prime minister and the American president, to be followed by an in-person dialogue between the Indian Foreign and Defense Ministers with their American counterparts on 11 April 2022.

The governments of the key countries that were eagerly following the developments were Russia, China, Pakistan and the American allies in Europe and Asia. The foreign policy establishments in all those countries had diverse sorts of expectations.

Russia wanted India to remain as one of the handful of nations that took a neutral stand on the issue of the Ukrainian war or defied the Western diktat to isolate Russia politically and punish Russia economically through sanctions. Russia, of course, has been one of the key countries having strategic partnerships with India. Moreover, Moscow has been highly encouraged by the voting behavior of India at the United Nations and the Indian willingness to buy Russian energy resources.

China obviously desired India to keep opposing the US sanctions policy and maintain its apparent neutrality on the Ukrainian issue which could lead to writing the obituary of the Quad security dialogue initiative and culminate in creating roadblocks in the progressive trajectory of India-US “strategic partnership.” Beijing has been apprehensive of the India-US defense and security cooperation as a pillar of perceived American strategy to contain China from emerging as a Hegemon in the Indo-Pacific.

Pakistan, the so-called all-weather ally of China, has had a similar wish to see the India-US strategic partnership, especially in the field of counter-terrorism, fall apart. Islamabad has been witnessing with tormented breath the slow-but-steady rise of India-US defense and security collaborations and painful-and-sharp decline of its alliance relationship with Washington.

The European and Asian allies of the United States, while coordinating their respective approaches to address the crisis in Ukraine with Washington, appeared hopeful that the Biden Administration would have direct interactions with the Indian government at the highest levels and succeed in roping in India to join them in a synchronized method to address the Russian aggressiveness.

But the outcome of the India-US summit and the 2+2 dialogue appears to have disappointed them all. First of all, India-US strategic partnership and defense collaborations did not fall apart and rather got further strengthened with newer resolve. Second, India did not follow the Western strategy on Ukraine like a shadow. Third, India said or did nothing to counter the US policy to back Ukraine and punish Russia. Fourth, India appears to have convinced the Biden Administration that its approach toward the Ukrainian crisis in no way strengthens Russian power or policy.

Prime Minister Narendra Modi conveyed to President Joe Biden the following Indian stands: A) That India upholds the principle of territorial integrity and sovereignty B) That India condemned the brutal killings of civilians in Bucha city and called for independent investigation C) That India has spoken to both the Ukrainian and Russian presidents calling for dialogue and ending the violence D) That India supplied humanitarian assistance to Ukraine and would continue to do so.

As per the reports, President Biden appreciated the Indian humanitarian assistance to Ukraine and did not put any other diplomatic or political pressure on the Indian prime minister. Moreover, the summit level conversations comprised several global, regional and bilateral issues where the two countries have been collaborating to address the challenges and make use of the opportunities.

The Indian Cabinet ministers and the American secretaries too attended the virtual summit to take directions and hold deeper and more expansive discussions. It was downright clear after the dialogue that the India-US strategic partnership has been able to stay stable and robust amidst a serious war in Europe that has led to talk of even a possible nuclear exchange.

The two sides resolved to address the “destabilizing consequences” of the war on the global economy and the international order. But, more significantly, the high-level interlocution stays focused on the recent developments and potential threats to peace, prosperity and political stability in the Indo-Pacific region.

Both India and the United States have been aware of the fears and apprehensions in the political debates in many countries that there could be a similar threat to the territorial integrity and sovereignty of nations in the Indo-Pacific. Also, there are clear attempts on the part of China to disrupt the current balance of power in this region and establish a hegemonic order. There was obviously no mention of China in the joint statements, but the elephant in the room was discussed.

The need for an open, free, and inclusive Indo-Pacific was re-emphasised. By implication, the real challenge to this goal needs to be addressed. It has been well known to all where the main challenge emanates from.

The best part of this exercise was that Ukraine did not dominate the dialogue either at the summit level or at the Cabinet-level. It was comprehensive, focused and surrounded the issues that are critical to sustain and further strengthen the India-US partnership. The two countries have come a long way in enhancing bilateral trade to the tune of more than $160 billion a year and defense and security collaborations that could not even be dreamt about two decades ago.

The virtual summit and the in-person Cabinet-level dialogue have clearly indicated the determination of the two countries to uplift the partnership to a higher level and not allow differing positions on international developments become an impediment. The real challenge to American and Indian security, in the long run, comes from the Indo-Pacific region and it was amply noted and appreciated.

Read more by author ‘Does the road to end the war in Ukraine run through Delhi?’ on IMPRI website.