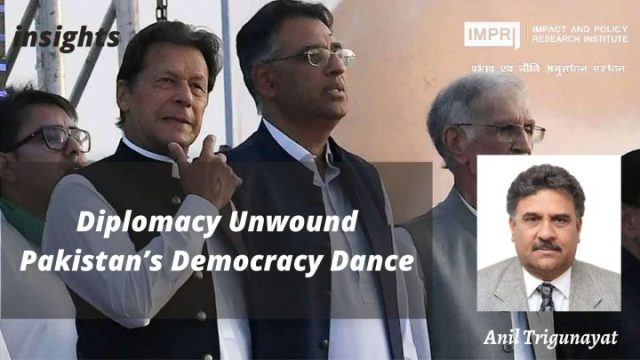 Famous Cricketer turned politician Imran Khan, the erstwhile Prime Minister of Pakistan, has been stumped by the opposition and the army in this Establishmentarian Democracy. Although over time almost all Prime Ministers fell out of the real proxy ruler’s favor and could never complete their full tenure, Imran Khan became the first one to be booted out through a ‘No Trust vote ‘. Benazir Bhutto and Shaukat Aziz had survived the no-confidence vote.

But in this drama, there is some positive outcome as well. Pakistan’s judiciary and democracy survived. Supreme Court overturning the decision of the Deputy Speaker and that of the President dissolving the National Assembly and calling for fresh elections without allowing the no-confidence motion was termed ultra vires and unconstitutional. Speaker Asad Qaiser was directed to hold the vote even though being great friends with Imran Khan he was in a personal ‘Dharam Sankat’ as he did not wish to ditch his friend of three decades. But finally, the Speaker cum friend in him was awakened and he performed his constitutional duty by resigning along with his deputy.

Another interim speaker authorized by PML-N Ayaz Sadiq was entrusted to do the chore of counting the opposition votes. Imran Khan has been a good cricketer but a bad political loser. His tricks to delay the vote by any means or trying to disallow or disrupt the parliamentary proceedings lacked grace and smacked manipulation at any cost.

He was particularly unhappy with Uncle Sam, whose Senior State department official gave him an excuse and a handle to brandish through the Pakistani Ambassador in Washington DC. Foreign intervention and ‘Hand’ are always the tools of preference and demagoguery for politicians in democracies. Even the US accuses Russia of helping Trump win the presidency and indulging in intervention.

All big powers do try their stunts to see that in any strategic country the leaders or the establishment should be pro and not against their interests or at least be neutral. Adequate assets are invested be it in their back yards or vast global expanse. Regime change from Iraq to Ukraine to Venezuela remains a favorite pastime of Superpowers.

In Pakistan, Army is enough- why would the Americans like to dirty their hands to dislodge their Non-Nato ally – even if some commentators say that Pakistan is run by Army, Americans and Allah. But diplomatic cables have many uses. Imran Khan chose to use the most obvious one – that helped him flag the narrative that he was ousted by foreign powers punishing him for shaking hands with Gospadin Vladimir Putin.

Hence, Khan vowed not to accept the ‘imported government ‘ of thugs and thieves ‘ i.e. Sharifs and Bhuttos and ten percent ones as well as the horse-traded turncoats of his own ilk. Accusations and counter-accusations galore in the murky waters of Pakistani politics. Army tried to play innocent when it decided to sacrifice its rogue rook in the game.

The guy was an utter failure in creating a ‘Naya Pakistan’ as no new pitch was available for the night cricket. The army is not Garry Packer they are heavily invested in industry and economy as owners of Pakistan and are the affected party. Hence a slight hint and with a sleight of a hand small-timers supporting ‘ selected PM’ jumped the ship to pave the way for Imran Khan’s exit. General Bajwa completely discounted the theory of ‘foreign interference ‘ by the USA and harped on the special relationship with Washington DC directly confronting the PM which clearly showed that on policy matters they were not in sync.

The army appears to have also not been in favor of Imran Khan dipping in the Volga river around the Kremlin. Moreover, several times Imran Khan praised India’s ‘Khuddar’ and independent foreign policy, especially in the context of the ongoing Russia-Ukraine crisis which may not have endeared him to the army bosses and rabid anti-India rhetoric’s in Rawalpindi. It was not a change of heart for him but a mere acknowledgment of a fact that was amply clear when dozens of western leaders and ministers dashed to Delhi to dissuade her and so did the Chinese and Russian foreign Ministers to appreciate India’s stance.

But India stood for peace, principles, and prosperity of her people despite the Indian origin Dy NSA of the USA clairvoyantly claiming that Russia will not come to the rescue of India should she have a war with China. As if India does not know that the diplomatic friendships and so-called strategic partnerships are also exuberant conveniences for good times alone and are fraught with explicit limitations hence she has to defend herself only. Imran apparently wanted to do likewise as if after decades of living under the shadow of superpowers he wanted to break free. Alas, his nemesis Maryam Nawaz Sharif asked him to go to India if he liked them so much. That ends the debate.

How will the new ‘Khichdi’ government cope with the structural challenges that will have to be seen? Whether it will be able to persuade its temporary benefactors to do something to contain the cross-border terrorism against India so that relationship can gradually move forward remains to be seen. But from India’s perspective and rightly so an unstable Pakistan is a bigger threat. That’s also true of Sri Lanka, Myanmar, Nepal, and the Maldives which are facing tremendous domestic stress. Let us wish them well.

Also written by author ‘Ukraine-Russian Conflict and its Impact on West Asia’ on IMPRI website.