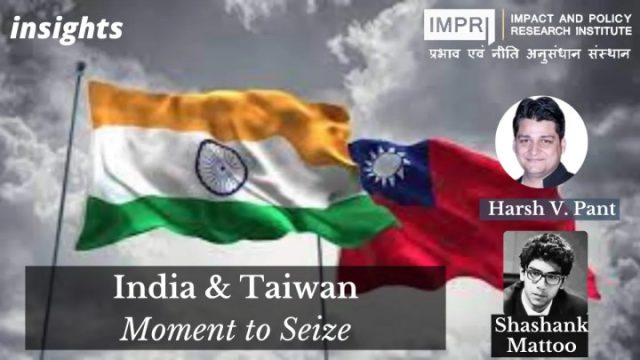 Realities in the Indo-Pacific region have changed, and it’s time for New Delhi to deepen its political ties with Taipei.

As the world was gripped by the possibility of another Taiwan Strait crisis during U.S. House Speaker Nancy Pelosi’s visit this month, India maintained a studied silence. That was broken last week when New Delhi’s foreign ministry spokesperson made a short and measured statement. Much of it was standard diplomatic fare, but two things stood out. India offered a guarded critique of China by urging an “avoidance of unilateral actions to change the status quo.” It also still refused to mention Beijing’s “One China” principle, the view that it has sovereignty over the mainland, Hong Kong, Macao, and Taiwan.

The foreign ministry statement largely avoided pointed questions by saying that New Delhi’s policies on Taiwan were “well known and consistent.” The omission of the “One China” principle has more to do with India’s position, articulated in 2014 by then-Indian Foreign Minister Sushma Swaraj, that Beijing could not expect New Delhi to verbalize its support when China has ignored Indian sovereignty concerns in Kashmir and Arunachal Pradesh. China took note: Shortly after the latest statement was publicized, the Chinese ambassador to New Delhi called on the government to reiterate its support for the “One China” principle.

The debate, sparked by India’s veiled criticism of China in the statement, has raised more questions than answers. Is India shedding some of its conservatism on Taiwan, and are more political signals likely to follow? Is New Delhi ready to risk incurring Beijing’s wrath?

India and Taiwan concluded a bilateral investment agreement in 2018, although talks of a free trade agreement seem to have sputtered.

First, it helps to unpack India’s interest in Taiwan. According to India’s foreign minister, the government encourages ties in trade and investment, tourism, and education, among others. Economics has remained New Delhi’s top priority. Bilateral trade with Taiwan stood at $5.7 billion in 2020, whereas Taiwanese foreign direct investment in India—once outmatched by a country like Belgium—has registered impressive growth. India and Taiwan concluded a bilateral investment agreement in 2018, although talks of a free trade agreement seem to have sputtered. The countries have committed to cooperation in areas from agriculture to technology.

Despite these efforts, Taiwanese diplomats have complained about India’s painful gradualism in building ties. In their telling, Taipei’s foot is on the accelerator while New Delhi hits the brakes each time their relationship gains momentum. There is a kernel of truth to this because India’s engagement with Taiwan seems both driven and constrained by its own relationship with China. Since the deadly clashes in the Galwan valley on the China-India border, for example, there has been sizable interest in and support for Taiwan within India.

Semiconductors are another trigger point for India: Taiwan’s supply to the global market is essential to its economy, especially in the automotive sector. The COVID-19 pandemic and Beijing’s weaponization of supply chains had already pushed New Delhi to begin reducing critical technology dependencies and build up domestic capacity. China’s aggression in the Taiwan Strait sparked fears of a disruption to the vital supply of semiconductors from Taiwan, leading India to court the island’s semiconductor manufacturers in the hopes of setting up a fabrication plant in India.

Semiconductors are another trigger point for India: Taiwan’s supply to the global market is essential to its economy, especially the automotive sector.

But public enthusiasm and semiconductors do not make a bilateral relationship. India has approached ties with Taiwan cautiously, aware that it is testing China’s reddest line. One can appreciate how deepening these ties may seem like more trouble than it’s worth for India. It shares a $100 billion trade relationship and the disputed border with China, which is also a close ally of Pakistan, India’s rival. Taiwan’s diplomats argue that India is happy to court trade and investment but is unwilling to grant one of Taiwan’s requests: an expression of political support. New Delhi has so far shied away from openly backing Taipei’s bid for observer status in bodies like the World Health Organization.

Not everyone in New Delhi supports this degree of caution, pointing out that India’s ties with Taiwan could serve as leverage in its diplomatic dance with China. In 2018, India’s parliamentary Committee on External Affairs urged the government to reconsider its “deferential foreign policy towards China.” If China was unwilling to reconsider its stance on outstanding border issues and sovereignty concerns, India should “contemplate using all options including its relations with Taiwan,” it said.

The committee was on to something. India’s old baseline for its Taiwan policy—focused on trade, tourism, and other uncontroversial themes—no longer reflects reality in the region. A successful Chinese blockade or invasion of Taiwan would disrupt its semiconductor supply, humiliate India’s partners like Japan and the United States, bolstering Beijing’s position in the Western Pacific, and prove fatal to any idea of a free and open Indo-Pacific region. Although that is an unlikely scenario for the moment, it is enough to force India to rethink its strategy.

Although trade volumes have increased, they remain pitifully low compared to Taiwan’s $113 billion exports and $82 billion imports from mainland China as well as its multibillion-dollar investments in Vietnam, Indonesia, and Malaysia.

A new Indian approach to Taiwan should focus on both economics and politics. Although trade volumes have increased, they remain pitifully low compared to Taiwan’s $113 billion exports and $82 billion imports from mainland China as well as its multibillion-dollar investments in Vietnam, Indonesia, and Malaysia.

As India continues its march to becoming a $5 trillion economy, it faces increasing concerns about jobless growth. In sectors such as electronics manufacturing, Taiwanese investments could lead to thousands of new jobs while helping meet burgeoning domestic demand. Foxconn, the Taiwanese electronics giant, has big plans for its presence in India. Sectors like tourism and education also remain largely untapped markets. All of this will require strong economic diplomacy on India’s part, and bureaucrats and businesspeople on both sides will look for political signals before taking the plunge.

India should consider two immediate changes to its policy. First, it should join the G-7 in backing observer status for Taiwan in technocratic international bodies. This public support would firmly establish India as a friendly player to Taiwanese businesses. Second, regular political interactions should be restored. The India-Taiwan Parliamentary Friendship Forum, established in 2016, is rarely active, and parliamentary visits are largely ad hoc.

There is a window of opportunity here: Even Taiwan’s pro-mainland opposition Kuomintang party, whose supporters have approached New Delhi with caution for fear of offending Beijing, is considering a rethink of its relationship with China and the wider world. Should New Delhi move quickly with its diplomatic offensive, it may find a warm reception in Taipei. India’s Taiwan moment has arrived, and its leaders would be wise to seize it.

This article was first published in Observer Research Foundation as India’s Taiwan Moment on August 20, 2022.

QUAD must produce impactful outcomes| May 28, 2022