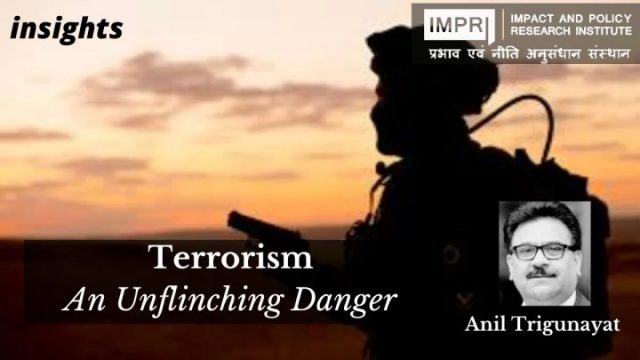 As both India and Pakistan celebrate the 75th anniversary of their independence, unfortunately, Pakistan is identified as the progenitor and a safe haven for terrorism and global terrorists stalking and staring at the world with impunity due to state patronage. Pakistan itself claims to be the victim of terrorism and flashes out statistics to prove it. But it forgets that if you nurture those mercenaries, they will come to bite you back.

There is an old Indian popular legend of a demon Bhasmasur, who prayed endlessly to Lord Shiva asking for powers that on whosoever’s head he puts his hand – that person will burn to ashes. Indeed, God gave that benediction to him. The next step was that he wanted to try on God himself, to see if it actually worked. The moral of the story is that terrorists are no one’s friends and will come to target even the sponsors if that suited them. Moreover, Pakistan has unfortunately pawned its future to radical ideology in its quest of one-upmanship against India under the garb of illegally supporting the disgruntled Kashmiris. In this game unfortunately it has found its iron-clad friend China to cover its back and that of the terrorists whom the world wants to designate. In the recent case of Abdul Rauf Azhar, brother of the dreaded Masood Azhar, the Chinese playbook remains the same.

1267 Committee of the UNSC tries to designate global terrorists within the prescribed parameters. It is also within the right of a member state to take some time if they wish to consider all dimensions of the matter. But China has taken an exceptional route to delay and deny the listing and sanctioning of dreaded terrorists through a hypocritical stance as a matter of routine. In such cases, there is little doubt about the concerned terrorist or terror group’s culpability and every additional day provides them sustenance and emboldens them even further. Meanwhile, Pakistan continues to use terrorism as a political tool and as an instrument of foreign policy against India and others. It has also been subjected to severe scrutiny by the FATF as well. And the terrorists thrive.

China obviously is not directly benefiting from it except by protecting its all-weather friend in Pakistan. This is the third notorious case including Masood Azhar, Abdul Rehman Makki, and Abdul Raouf Azhar of Jaish e Mohammed (JeM) -a mastermind of the 1998 hijacking of Indian flight IC 814: Parliament and Pathankot attacks. All were wanted in India and also listed by the US.

India which had mooted the proposal to list Azhar was supported by 14 members of the UNSC except for China which put a technical hold on it for six months. In a similar vein, Beijing put a hold in June on Abdul Rehman Makki, Deputy Chief of Lashkar-e- Taiba (LeT). The second one in a year and we have a few more months to go. India rightly called it ‘unfortunate’ and replete with double speak and double standards. Thank you, Dr. Jekyll and Mr. Hyde.

Since Beijing has an adversarial relationship with both New Delhi and Washington at this point in time it was a way of getting back at both. It probably wanted India to stick to the ‘One China Policy’ while it battles out the adversity in the Taiwan fracas and faced loss due to Pelosi’s visit. It had an exactly opposite effect since India and China do have a history and New Delhi has learned from it even if rather late in the day. But how expensive could that be for China itself let alone the disservice they are doing to their all-weather ally and its people?

This is not the way that terrorism, extremism, and radicalization can be fought. Selective approaches of ‘My terrorist vs Yours’ (or an analogy of good terrorist vs bad terrorist) will lead to giving a free run to the terror groups who will continue to enjoy the bounty placed on their heads and will travel freely and garner funds and weapons of their choice. Geopolitics gets the better of the global good. No wonder the Indian Ambassador (PR) to UN Ruchira Kamboj and Official Spokesman Arindam Bagchi lamented, “It is most regrettable that genuine and evidence-based listing proposals pertaining to some of the most notorious terrorists in the world are being placed on hold… double standards and continuing politicization have rendered the credibility of the Sanctions Regime at an all-time low.” But the deaf can’t hear but pretend to dance all the same.

It was in 2016 when Prime Minister Narendra Modi spoke at the UNGA and while in the USA, he regretted that the world was not able to even define terrorism let alone fight against it. The global fight against terrorism has become a sham. He reiterated, “Humanist forces in the world will have to put pressure so that it is decided in black and white what is terrorism. Since there is no definition, talk about good terrorism and bad terrorism is going on. We cannot protect humanity with this good and bad terrorism- terrorism is terrorism”. India’s proposal for a Comprehensive Convention on Terrorism (CCIT) has been in cold storage at the UN since 1996 because of selectivity by member states.

India has suffered from cross-border terrorism for over four decades and has even followed a policy of “Talks and Terror” cannot continue with Pakistan after repeated terror attacks that were directly linked to Pakistan-based terror groups with the connivance of the deep state there.  Hence, post-Uri and Pulwama, India shifted gears adopting ‘Zero Tolerance’ and being aggressive against terror camps and outfits both internally and across the border. India has learned to take care of the threats posed. Balakot and several other retaliations attest to that. However, a high state of vigil is a pre-requisite if we have to keep people and country safe as the likes of China and Pakistan will learn from their mistakes in due course, for terrorism will spare none. But by then it may be too late.

Meanwhile, ‘Ekla Chalo Re’ is the dictum we have to follow.

This article was first published in Chanakya Forum as Terrorism is Not a Game on August 14, 2022.