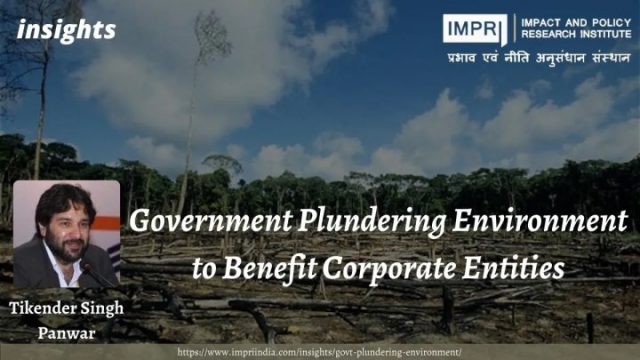 The massive destruction of the environment and ecology to benefit corporate entities is a common feature of both the Union and the state governments.

Whether it is the plundering of forests and the ecosystem of the Aravallis (Haryana) and the Himalayas (particularly the Kinnaur district) or the Andaman and Nicobar Islands, where the NITI Aayog has cleared a megadevelopment project or the promptness in undermining environment impact assessment (EIA) to set up industrial units, they all show the utter disregard of the environment.

The Draft Regional Plan (DRP)-2041 for the Aravallis is a colossal disaster in the offing. Prepared by the Haryana government, the plan negates some of the provisions of the DRP-2021 and intends to use prime forest areas for non-forest activity. Large portions of forestland will lose protection from construction under the ‘National Conservation Zone’ (NCZ) as defined in the DRP-2021.

The new draft has replaced NCZ with ‘Natural Zone’ and has tweaked the definition of natural features, like mountains, hills and rivers, by restricting them to only those notified under certain Acts and recognised in land records. Consequently, large tracts of forestland in Gurugram and Faridabad will lose protection to land sharks and illegal mining. On January 1, four people died in a landslide at the Dadam mining zone, surrounded by the Aravallis on both sides, in the Bhiwani district.

The latest edition of ‘India State of Forest Report’ states that the forest and tree cover has increased by 2,261 sq km since 2019 to 8.09 lakh sq km in 2021. However, it also recorded a reduction in the forest cover in hill and tribal districts.

The reality is that good-quality forests with a good canopy have reduced over a period of time, showing the increasing systematic plunder under successive governments, especially the Bharatiya Janata Party.

A circular issued to the states and the Union Territories (UTs) by the ministry of environment and forestry mentions a ‘star rating’ under which the Centre will rate them “based on efficiency and timelines in granting environmental clearance”—quick disposals of complaints and minimum site visits—to projects in the shortest time. Two marks will be given for EIA cleared in 80 days, one marks for 105 days, 0.5 marks for 105-120 days and zero if it takes more than 120 days.

The timelines may look attractive but the reality is that clearance will be a mere formality as in the smart city rating system. In fact, EIA cleared by officials from inside conference rooms without visiting the site is a new way forward for the government’s ‘ease of doing business’ model.

The practice of granting environmental clearance without officials visiting the site will end in a disaster for the environment and trigger public unrest against such projects. For example, the flora and fauna mentioned in one EIA report prepared for a hydropower project in Thangi, Kinnaur, that would be affected never existed in the mountain ranges. Such misleading reports cause unrest in tribal districts like the ‘No means No’ campaign launched by Kinnauras against the proposed 804 MW Jangi Thopan Powari Hydroelectricity Project on Satluj.

The star-rating method shows the sheer desperation of the Centre in granting clearance to projects by destroying the ecology and environment.

The Rs 72,000 crore Great Nicobar project is another example of the Centre’s unbridled greed. The EIA report for this project, as pointed out by many experts, has raised serious questions “related to the submission of incorrect or incomplete information, scientific inaccuracy and failure to follow the appropriate procedure”.

The project, which has been vociferously opposed by the local population but being strongly pushed by the NITI Aayog, includes the construction of a mega port, an airport complex, a township spread over 130 sq km of pristine forest and solar and gas-based power plants.

Such moves by the Centre and the states will be a grave risk to nature, ecology, environment, people and the projects themselves. Decisions taken to serve the interests of big corporate entities cannot be a sustainable model of development.

This was first published in NewsClick as Government Plundering Environment, Ecology to Benefit Corporate Entities on 28th January 2022