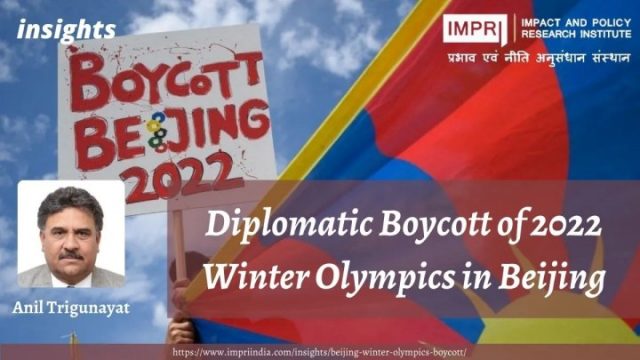 Sports events are often a union and concert of the best sportsmen from the world competing for excellence. More so for the Olympics. But sometimes they fall prey to the games of geopolitics.

Chinese winter Olympics starting from Feb 4 is no exception. The ongoing turf war between Beijing and Washington became a major reason for the game’s diplomatic boycott by several western countries led by China. For some human rights records and violations by the Chinese, the Communist state is a good reason to give a go by to the games as they intend to focus on the plight of minorities especially Uyghurs.

For some others in Europe, the reason is rightly adduced to the Omicron spread whose predecessor was said to be of Wuhan origin. Some were still weighing their options. As such for many countries from the tropics Winter games are not that exciting. China obviously, and its wolf warrior diplomacy, must take a fair share of the blame and accountability for the state of affairs as it dismissed the allegations as unjustified speculations.

5G and snooping controversy also crept in from the backdoor as ‘My 2022’ compulsory Chinese health app to track the Covid-19  status of the sportsmen and officials, was found to be having some security breaches by a Canadian lab – a country which is going through a rough patch in their relationship with Beijing. Even though the International Olympic Committee had discounted the findings, the US and many other countries advised their athletes against the possibility of their personal data being breached and compromised by the Chinese state and its affiliates.

Several of the Chinese technology companies are the official sponsors of the games and hence finger-pointing is as easy as counting 10. A nice topic for media debate. This is a new avatar of the psyops indulged by the genuine concerns of the western countries- a domain which the Chinese mastered decades ago through their “Three Warfare strategy”.

Even though Chinese officials displayed their often-absent magnanimity by partially removing their iron curtain firewall to allow some social media apps like Facebook, Twitter, or Google the seed of doubt and trust deficit persist. Perhaps rightly so. After all the communist and totalitarian regimes are often credited with intrusive surveillance and excessive control over the citizens’ and foreigners’ movements and activities as a routine. It should not have surprised anyone. But if one plays naïve that it is not done in democracies and monarchies you don’t have to go very far. Ask former German chancellor or the victims of Pegasus. Examples are aplenty of breaches of privacy. As data becomes the new oil, mining is a given.

AI tools and technology are surfeit in our day-to-day conduct and lives with increasing dependence on technology and communication tools. After all, smartphones are not that smart as the phobia dictated to the athletes to keep their high-end smartphones back home and use burner or cheap phones instead. But I wonder if Apple is not expanding its production targets in China while diversifying to other Asian countries. However, some reports indicate that Out of the 30 countries where Apple devices were manufactured in 2020, six accounted for over 80% of annual production. China contributed 42%, followed by Japan (16%), the US  (9%), Taiwan (6%), South Korea (5%), and Vietnam (4%). One can rest the case.

While poor athletes will be at their wits end whether to focus on competition to excel or compete to keep their personal data safe, the geopolitics for discrediting the integrity of the games and their organizers will be on full display.

Articles written by contributors have different viewpoints. The views expressed in the article are the author’s own and not necessarily supported by TIO, The India Observer its affiliates, staff, or the management. Our Articles can be reproduced, with the following conditions, (1) No alteration to the content, (2) Visible, full credit is given to the Author & Editor. (3) Citing, The India Observer, TIO. In the case of online or electronic media, a link to the original article must be given. Rules are strictly enforced.