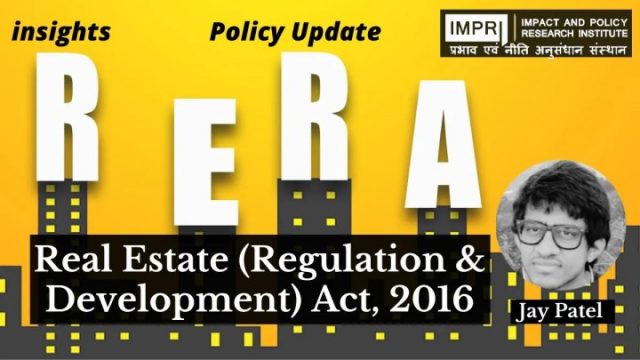 The Real Estate (Regulation and Development) Act, 2016 (RERA) was passed in Parliament in March 2016, and all the provisions of the act were made effective on 1 May 2017. One of the main aims of the act has been to discipline the real estate market and to protect consumers’ interests against fraudulent operators. The regulatory mechanism thus setup was also intended to infuse spirit into the then stagnant real estate market and to increase fund flow into the sector, including foreign investments.

Five years after its launch, let us assess its impact, successes, and failures. As per a recent report, the real estate sector, as of 2017, provided 50 million jobs, making it the second-largest after agriculture. It also contributed 7% to India’s GDP in 2018-19 and is expected to grow by around 13% in 2025.

It has been more than 5 years since the RERA was passed by the parliament and although in the initial few years the implementation was pretty slow, that issue has still not been completely overcome by now, although progress has been made. As of now, except for Nagaland, Meghalaya, Sikkim, West Bengal, and Ladakh, other states and UTs have established the Real Estate Regulatory Authority (25-Permanent and 6-Interim).

As far as the establishment of Tribunals is concerned, except Nagaland, Arunachal Pradesh, Meghalaya, Mizoram, Sikkim, West Bengal, Jammu and Kashmir, and Ladakh, other states/UTs have established the Tribunals (24-regular and 4-interim). In the case of appointing adjudicating officers, 11 states and UTs are yet to make the appointments. All the states and UTs have notified the rules except Nagaland (which is in the process of notifying them).

There are many important points to make concerning the performance of RERA:

Emerging Issues and the Way Forward

As we have already observed, RERA is yet to be completely implemented in the country, especially in some of the north-eastern states the issue of implementation remains. The main reason behind non-implementation in these states remains the reluctance of Autonomous Councils, these Councils have substantial legal power vested in them by the laws and the jurisdiction of land is under their control. The respective states are in the process of seeking legal opinion on the matter, but until then, the matter remains unresolved. Incentives and disincentives can be brought in place by the central government to address the issue of implementation.

Apart from this, some states (like Haryana, Uttar Pradesh, and Gujarat) have also diluted the provisions to benefit builders by narrowing the definition of ‘ongoing project’ and have weakened penal provisions by compounding provisions.

There are a lot of complaints from consumers about the non-compliance of the orders issued by the RERA authorities and their helplessness about the process. Although non-compliance with orders is criminalized in the act itself, that does not deter promoters from defying the orders. The authorities should strictly enforce the orders and non-compliance should be dealt with accordingly. It is pertinent to mention that most Authorities themselves aren’t publishing annual reports as mandated by the act, this was revealed during the third meeting of the Central Advisory Council (CAC).

Yet another issue faced by consumers is that of a prolonged grievance process. Although the act mandates that all complaints should be resolved within 60 days, in the event of any delay, a reason needs to be provided for the delay. The fact remains that many complaints are taking way longer than the mandated period. It is true that customers are more satisfied with the present system than with the older one, but the level of satisfaction needs to be improved further, as the present rate of satisfaction isn’t encouraging either.

It is important to understand that the interests of the developers also need to be secured along with those of the buyers. Developers are expected to complete their projects within the specified time period, but at the same time, they also have to get many clearances approved by the local authorities. The delay in getting the permissions from the local authorities affect the pace of development and can lead to increased costs for the builders, and their commitments to the customers are also affected because of such delays.

The government, on the other hand, is trying to resolve this issue by proposing to bring in single-window clearance that would smoothen the process and expedite the clearances. Local authorities should also be covered under the act and held liable for any failure on their part.

There is also a demand from the real estate bodies like Confederation of Real Estate Developers’ Associations of India (CREDAI) and National Real Estate Development Council (NAREDCO) to reduce circle rates (the minimum rate at which property needs to be sold; otherwise extra taxes need to be paid by both the sellers and buyers, in case the selling price is lower than 10% or more vis-à-vis the circle rate), or to extend the rebate where the concession is already provided so that it benefits both buyers and sellers.

The developers argue that GST, followed by RERA, and demonetization, along with the fund crunch, made a debilitating impact on the developers. Therefore, it is argued that a conducive environment for business needs to be facilitated to recoup from the bout. Jaxay Shah, former chairman of CREDAI, suggested that governments should reduce GST rates, stamp duties, and interest rates on home loans to boost the demand.

The recent judgement by the Supreme Court has complicated the matter by extending the jurisdiction of RERA to cover even the banks; in case the bank has resorted to Section 13(4) of Securitization and Reconstruction of Financial Assets and Enforcement of Security Interest Act, 2002 (‘SARFAESI Act’). Now even a bank would be considered a promoter if it takes the recourse to the above-mentioned act.

This in effect means that RERA would prevail over SARFAESI in the case of any conflict between them. As a result, if a bank attempts to recover the funds from the developer, the bank would be considered a promoter. In such cases, it would be difficult for banks to recover their money without being declared as promoters and taking all the liabilities that follow along with it.

There is another problem with overlapping complaint forums. Although the RERA has mandated its own tribunal as the main authority to deal with any complaints concerning real estate matters, the fact remains that along with RERA tribunals, consumers still use consumer forums. This simultaneous operation of both; Forums and Tribunals, can create confusion among consumers. There is a need to streamline the process and remove any ambiguity present in the laws.

Looking back at the journey of RERA and its effects over the years, one finds that the act has brought substantial change in the nature of the real estate market, making it a more formal and disciplined sector. Its success can be gauged by looking at the increased level of optimism shown by the customers, the number of complaints filed and disposed of, as well as improvement in the global real estate transparency ranking (having moved from 41 to 34, although other factors also contributed to it).

As pointed out above, loopholes remain, but these can be addressed by the governments if proper arrangements are put in place and political will is demonstrated. It is also useful to have more awareness programs among the masses to educate ordinary citizens about its benefits.

Watch IMPRI #WebPolicyTalk on Housing in India: What Happens Next? as part of the talk series #LocalGovernance

Watch a #WebPolicyTalk – IMPRI Special Lecture by Prof P S N Rao on The State of Real Estate and Housing in India amidst COVID-19 Pandemic: Impact and Way Forward