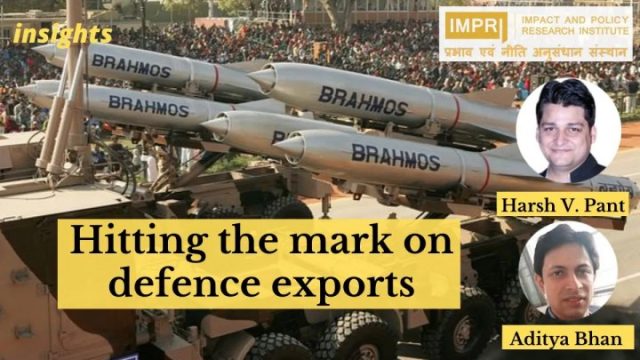 Speaking at the recently-concluded Naval Innovation and Indigenisation Organisation seminar Swavlamban in New Delhi, Prime Minister (PM) Narendra Modi reiterated the government’s will to prise India out of its addiction to defence imports and turn it into an exporter of military equipment. Citing the example of the BrahMos cruise missile, which India is exporting to the Philippines, PM Modi asserted the need for greater acquisition of indigenously-produced defence products by the Indian armed forces to establish the credibility of these products internationally.

The numbers recently released by the Ministry of Defence (MoD) suggest that the government’s efforts are bearing fruit, with defence exports hitting an all-time high of ~13,000 crore during FY21-22, and the private sector accounting for 70 per cent of the exports. The MoD, in fact, is preparing to launch 75 items in the fields of unmanned systems, robotics, intelligent surveillance and more to propel India toward the five-year defence exports target of ~35,000 crore set by the PM in 2020. For perspective, Indian defence exports were worth ~8,434 crore in the pandemic-affected FY21, ~9,115 crore in FY20, and ~2,059 in FY16.

It is noteworthy that approximately half and one-fourth of India’s defence exports between 2017 and 2021, were to Myanmar and Sri Lanka respectively, though exports to the latter have reached a standstill in recent times due to its prevailing economic crisis. During FY21 in particular, however, it was the US that was India’s biggest customer. Other major regions to which Indian exports were headed were South-East Asia, West Asia and Africa, with Indian military hardware exports comprising advanced light helicopters, missiles, offshore patrol vessels, surveillance systems, personnel protective gear, and various types of radars.

Even a cursory look at the drivers of Indian defence exports reveals the salience of simplified industrial licensing, easing of export restrictions, and issuance of no-objection certificates.

Post-2014, a separate defence export strategy was prepared, broadly focusing on export promotion or facilitation and export regulation. The Ministry of External Affairs was tasked with supporting the creation of lines of credit for countries to import Indian defence products, and the EXIM Bank with financing defence exports where feasible. Additionally, defence attaches in Indian missions abroad have been authorised to encourage Indian exports.

The Defence Production and Export Promotion Policy 2020 has also pushed exports by inter alia mandating defence public sector undertakings to derive at least 25 per cent of their revenue from exports, including success fee by 2025, leveraging Defence Expo and Aero India to exhibit India’s defence production capacity with branding of Indian items, achieving time-bound export clearances from the Department of Defence Production, and obtaining active support from the armed forces for exploring opportunities for defence product exports.

There are, however, various factors retarding the growth of Indian defence exports. The most important include the absence of critical technologies, the long gestation period involved in creating a capital and technology-intensive production base, difficulties in conducting business operations arising from stringent labour laws and compliance burden, inadequate funding of defence research and development (R&D), and the lack of engineering and research skills.

Poor designing capacity in core technologies, insufficient finance of R&D, and the incapability to produce critical subsystems and components have for long hampered indigenous manufacturing in India, while the long gestation periods render indigenous produce outdated by novel technologies. To compound matters, the adverse skill gap has persisted due to weak industry-academia interface.

Given these challenges, it would appear that the ~35,000 crore export target set by the PM is an ambitious one. Achieving the same, however, is possible by tapping the right opportunities by smartly utilising our existing competitive advantages.

The most important include the absence of critical technologies, the long gestation period involved in creating a capital and technology-intensive production base, difficulties in conducting business operations arising from stringent labour laws and compliance burden, inadequate funding of defence research and development (R&D), and the lack of engineering and research skills.

The prevailing cost advantages in various lines of indigenous defence production enable India to explore export opportunities in African countries like Algeria, Morocco and Angola, which are heavily reliant on imports from the US and Russia. Further, Indian arms exports should be targeted to West Asian countries like Saudi Arabia, the UAE and Qatar.

India’s stature should also be consolidated in the Indian Ocean Region via exports majorly enabled through lines of credit to its sea and ocean-faring neighbours like Maldives, Bangladesh and Myanmar, largely as part of the Neighbourhood First policy. Shedding its inhibitions in defence engagement, New Delhi’s foreign policy priorities in the Indo-Pacific should be aimed at making full use of the growing regional wariness about China’s aggressive intent.

While it may be prudent to initially focus on certain medium to high technology exports such as the BrahMos cruise missile, Pinaka multi-barrel rocket launcher, the Advanced Light Helicopter Dhruv and the Akash air-defence system, efforts must be targeted at providing end-to-end defence solutions over the longer run. These would involve technological know-how, spare parts provision and training. And though India has embarked on a desirable path of increasing self-reliance in defence, the journey ahead is a long one fraught with difficulties. These challenges can only be overcome through focus and persistence in policy and implementation, with increasing participation from the private sector as part of a virtuous indigenous defence manufacturing ecosystem.

This article was first published in Business Standard as Hitting the mark on defence exports on 27 July 2022.