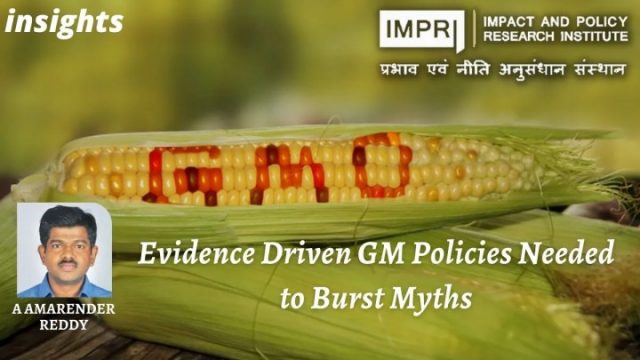 Scientific policy-making should be solely based on valid evidence and scientific merit and not be driven by a stand either for or against GM crops. The government’s Genetic Engineering Appraisal Committee (GEAC) recently recommended the environmental release of transgenic Dhara Mustard Hybrid-11 (DMH-11) for testing in farmers’ fields and seed production. If testing in the fields gives greater yield and other intended benefits, the mustard hybrid could be permitted for wider commercial cultivation across India.

The DMH-11 showed a 30-35% higher yield than local varieties in laboratory tests. Another farmer-friendly characteristic of genetically modified (GM) mustard is herbicide resistance, which facilitates herbicide use to remove weeds from the fields instead of manual weeding which costs more due to high wage rates in view of labor scarcity. The DMH-11 has already passed multi-location tests. However, it still needs to cross hurdles such as opposition from anti-GMO activists, field tests under farm conditions, and its effect on honeybees and other pollinators.

During the past 20 years, anti-GM activists and opinions influenced the government’s decision against the commercial release of GM mustard on the grounds of environmental and food safety, resulting in a lost opportunity to increase mustard production. This crop has the potential to increase farmers’ income and reduce import dependency. India imports about 60% of its domestic consumption of edible oils by spending about Rs 1 lakh crore in foreign exchange every year.

For over 20 years, GM canola oil (a variant of mustard) and GM soya oil have been consumed globally, with no cases of adverse impact coming to light. In India, we have been importing nearly 8 million tonnes of these GM oils and consuming GM canola oil and GM soya oil for the past 15 years. Notably, Australia has given its approval for the commercial cultivation of Indian GM mustard with the sole purpose of importing it into India.

Another unfounded fear propagated by anti-GMO activists is that with GM technology, entire seed production will go into the hands of multinationals. Unlike Bt cotton, the government has full control over GM mustard technology and if it gives licenses to private seed companies for seed production and marketing, the latter has to pay royalties to the government.

Further, even if the government allows private seed production and marketing, the farmers have the right to access seeds at a reasonable price under the Protection of Plant Varieties and Farmers’ Rights Act, of 2001. Hence private seed companies will not be allowed to sell beyond the Maximum Retail Price (MRP); the MRP itself has to be fixed by private firms with the consent of governments so that the prices remain affordable for small farmers.

There is a need for creating an enabling environment for all stakeholders to move forward for testing in fields and seed production. This is a huge task and cannot be handled by a single agency or department. It requires coordination between private and public agencies and also the community.

The starting point should be the creation of a consortium of all stakeholders such as the Department of Agriculture, Indian Council of Agricultural Research, farmers’ organizations, and private seed companies to coordinate and oversee various activities for large-scale commercialization of DHM-11 in the mission mode.

Foremost is the task of allaying the fears surrounding GM mustard so that everybody can be part of this revitalized ‘yellow revolution’ without any ambiguity. Institutional arrangements for large-scale seed production and distribution with private participation should be the priority for wider adoption by the farmers.

Potential districts for wider adoption of GM mustard need to be identified in mustard-growing states such as Rajasthan, Haryana, Uttar Pradesh, and Punjab for focused and intensive efforts. Initially, the government may identify about 100 districts for prioritization in creating awareness about GM mustard, then train the district agricultural officers, incharges of Krishi Vigyan Kendras, and Agricultural Technology Management Agencies regarding GM technology, seed production, management practices, etc. It is equally important to sensitize private companies and input dealers in these districts.

Busting myths relating to the food and environmental safety of GM mustard is the first step towards avoiding a repeat of the experience of Bt brinjal in 2009-10 and GM mustard in 2016-17. In 2009, Bt brinjal was recommended by the GEAC for commercialization, but kept under a moratorium until now due to various pressures, while in 2013, the same technology was commercialized successfully in Bangladesh. Similarly, GM mustard was also approved by the GEAC in 2016 but got stalled for similar reasons.

We have to understand that for centuries, farmers have ‘genetically engineered’ crops through breeding for choosing better food crops. Today, with GM technology, we are replicating the same process in a laboratory, with more precision and testing. The government should accept the recommendations of the regulatory body without any delay. This will pave the way for more scientific advancements and modern technologies in agriculture to make India more export-competitive and enhance farmers’ income.

This article was first published in The Tribune as Evidence-based policy needed to allay fears on Nov 28, 2022.

Read another article by A. Amarender Reddy- Eliminating hunger in a world of Many in IMPRI insights.