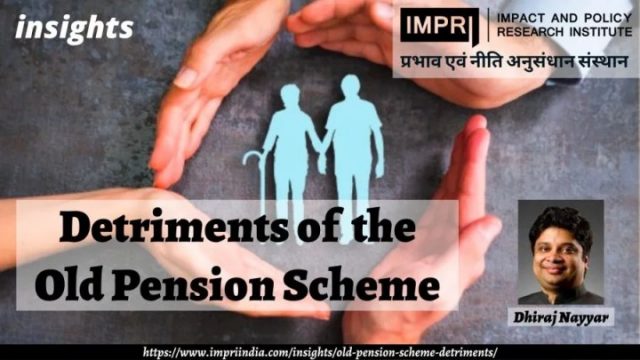 Whichever way one looks at it, the promise by select state governments and political parties to return to the Old Pension System for Government employees is a freebie of the kind that Prime Minister Narendra Modi referred to as Revadi. It is not affordable. It is not targeted at the deserving. It is not productive. It creates a terrible precedent. It ought to carry the following “health” warnings: disastrous for state finances, additional liabilities for future taxpayers and detrimental to the economic well-being of the majority.

Ironically, it may not even be an election winner since only a small minority of voters are employed by the Government. It reflects the bane of India’s political economy: the power of narrow vested interests.

One of the biggest reforms of the last 30 years was the decision of the then NDA government of Prime Minister A.B. Vajpayee to abolish the Old Pension Scheme (OPS) and transition to a New Pension Scheme (NPS). In the old system, the Government bore the entire burden of the pension of retired employees, whereas, in the NPS, the employee would contribute 10% of her basic salary, and the government would contribute 14%.

Also, the pension fund would be market-linked in a departure from previous practice. To get the NPS implemented and to reduce resistance, the reform came with a “grandfathering” clause: only those who joined Government service after 2004 were made to sign up for the NPS; the existing crop of bureaucrats would continue to benefit from the earlier largesse when they retired.

For Government employees, this was radical reform, but for private sector employees, this has always been the norm. Of course, any kind of pension is beyond reach for those in the unorganized sector, which is three-fourths of the workforce.

Government servants are India’s labour elite. At the lower end of the skill spectrum, they earn substantially more than their private sector counterparts. At the higher end, while salaries may be lower than private sector counterparts, there are plenty of handsome perquisites, including government-provided housing in prime locations and vehicles with chauffeurs. Apart from salaries and perquisites, government employees enjoy job security for their entire working life, which is not measured tangibly in rupees but is priceless in a country where most of the workforce earns a daily wage.

The growing queue of promises to restore the OPS is worrying. The fact is that India has not reformed its economy deeply enough since 1991, but it has rarely reversed any major reform which has already been implemented. If more states begin to dismantle the NPS framework, it will mean pulling down the curtains on a big-ticket reform, thus opening the door for pushback by vested interests in other areas of reform.

In recent years, competition between states or competitive federalism has been a very positive development as states have competed to improve ease of doing business and other measurable indicators like health and education outcomes. A race to the top has been facilitated to help all states improve their performance. The competition on reintroducing OPS has turned into a race to the bottom, with states threatening to dent and destroy their public finances. Everyone participating in such a race will end up worse off than before.

Another recent trend of prioritizing government capital expenditure, which is productive, over revenue expenditure, which is unproductive, may get seriously reversed if states spend more on pensions. Of course, the Central Government is spending on infrastructure and other productive assets, but states must complement this spending to achieve even better outcomes. Governments need to be judicious about spending in a country like India, with a limited tax base and multiple claims on expenditure.

Also, by increasing the attractiveness of Government employment, the entire discourse on job creation gets distorted. The reality is that no Government, Centre or state can generate enough jobs to satisfy the aspirations of India’s workforce. Already, people apply in lakhs for a few hundred government jobs. It will only end in more disappointment and frustration.

All state governments should focus on creating higher quality and better-paying jobs outside the Government system. If fiscal resources are to be spent directly on improving the quality of jobs, it should be on those outside government. For example, governments could contribute towards pensions for unorganized sector workers. It could pay for the skilling of individuals via a system of vouchers. That would be money well invested.

Hopefully, most states will resist this unwarranted populism. Because populism is a slippery slope. It will not stop at this. Let there be no doubt that such revadis are bad for the nation’s health and inevitably leave a bitter aftertaste.

This article was first published in Sunday Guardian as Old Pension Scheme should be Permanently Retired on December 10, 2022.