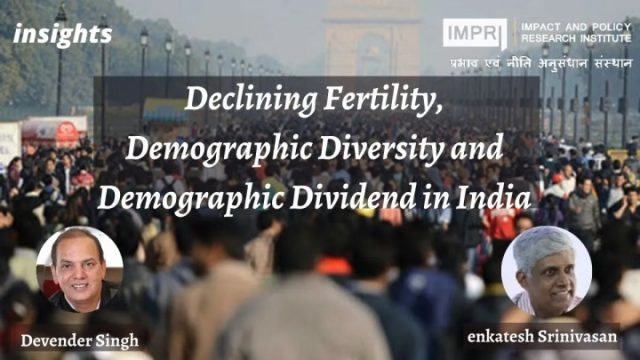 National Family Health Survey 5 shows that fertility in India is declining, and the total fertility rate (TFR) has, in fact, reached 2.0, a notch below 2.1, the replacement level of fertility. This, in turn, has spurred a debate on the pace of population growth in India and its consequences. There are some who are rejoicing the achievement of this much-desired milestone while some others while welcoming the fertility decline, are bemoaning its consequence for population growth and demographic dividend.

We focus on two key themes in this write-up i.e., population growth scenarios and demographic diversity in the country, to bring better clarity to the discussion.

First, India has entered a low fertility era but we would like to point out that there is nothing out of the blue here. The decline in the TFR is as per trends in recent years; population projections undertaken in 2020 by the National Commission on Population, Government of India had predicted the TFR to reach 2.1 in 2019 and 1.94 by 2021-2025.

Second, based on this declining trend in TFR and other population parameters, population projections by the National Commission on Population show that the Indian population will continue to increase from 2011 to 2036, to become 152.2 crores.

Another population projection exercise was undertaken by UNFPA India in 2017 for its study on ‘Demographic Dividend in India’, shows a similar trend in population growth. As per this study, despite the declining TFR, the population will keep growing for some more years due to ‘population momentum’ before it stabilizes and then starts declining.

The peak population is expected to be 1657 million around the year 2060, after which it is expected to decline, albeit slowly. Hence, the talks of immediate ‘population collapse’ or ‘depopulation’ seem premature at this stage.

Third, we need to acknowledge demographic diversity in India and its consequences for policy planning. Demographically speaking, India is akin to three continents: there are states, mostly southern and border states which have TFR similar to developed countries in Europe;

then there are states in the north-central region of India where the fertility is like that of underdeveloped countries, and then there are rest of the states whose demographic transition is in-between these two sets of states.

As per the population projections by National Commission on Population, more than 50%, 17 crores out of the total 31.1 crores population growth in India during 2011-2036, will occur in the five States of Bihar, Uttar Pradesh Maharashtra, West Bengal, and Madhya Pradesh.

On the other hand, the contribution of the five southern states, namely Andhra Pradesh, Karnataka, Kerala, Telangana, and Tamil Nadu will be only 2.9 crores, 9% of the total population growth.

Fourth, let us look at the demographic dividend prospects. As per National Commission on Population’s population projections, the share of the workers in the age-group 15-59 years in the total population increase is 81.4% between 2011 and 2036.

Similarly, as per UNFPA India’s population projections, India entered the demographic dividend opportunity window in around 2005-06 and will remain there till 2055-56.

Fifth and finally, demographic diversity means increased migration. The mass exodus of migrants during the lockdown in 2020 is a testimony to young people seeking employment opportunities in far-off states and cities.

While there are various facets that need concerted attention, let us take the issue of skill development. In the last few years, skill development is being seen as critical for the employment of a large number of youth, especially in the northern states.

However, the lack of popularity of these courses among youth is due to their inability to get gainful employment as there is a mismatch between the labor demand in geographies within the states. While some states have started skill development universities, which is welcome but these should be supplemented with skill training institutes in each district and in some sub-district towns as well,

especially districts with high out-migration. What is critical is to have a coordinated thought process for employment generation and to join the well-intended but disparate dots that are being created.

Therefore, demographic diversity provides varied development scenarios in different states. To address the issue of harnessing the demographic dividend, the need of the hour is to take on board the size of the youth population seeking employment;

the size of migration; learn from the experiences before us in skill development efforts, and be focused to benefit large numbers of youth needing skills of various types.