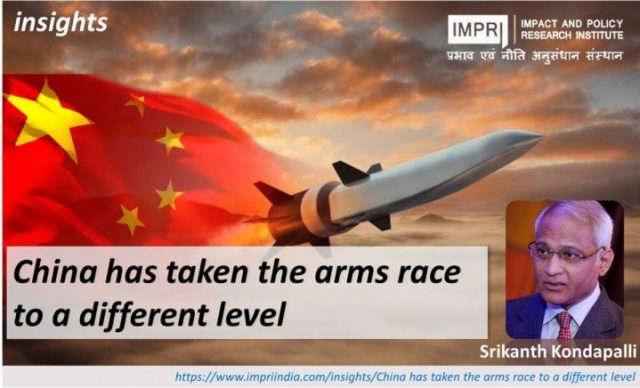 While Russia underplayed China’s tests as not violating any international treaty it has signed, it is concerned about losing ground on such technologies.

China recently demonstrated an “assassin’s mace” weapon that has the US and Russia worried, for different reasons. For the US, China’s flight test of a manoeuvrable hypersonic glide vehicle upsets the strategic balance of power, while proliferation of such technologies through clandestine methods could undermine Russian security. Given the ongoing border stand-off and China’s refusal to de-escalate, such tests add fuel to the fire with India.

Hypersonic glide vehicles are manoeuvrable weapons that can deliver nuclear or other payloads at Mach 5-10 speed and strike anywhere on the earth within an hour. The combination of hypersonic speeds and manoeuvrability means that such weapons could spring a surprise on the adversary by evading its early warning systems and penetrate missile defence systems.

While China’s foreign ministry spokesman Zhao Lijian said in October that this was a “routine test”, the US Air Force Secretary Frank Kendall in November stated that an arms race with China is on – not necessarily for increased numbers of weapons

but for qualitatively superior ones — and that Beijing has been at it “very aggressively” for some time now.

While Russia underplayed China’s tests as not violating any international treaty it has signed, it is concerned about losing ground on such technologies. Russia has several hypersonic test beds in Ayaks, Zircon, Avangard and Kinzal missiles. But it has made a spate of arrests of its scientists involved in hypersonic systems, including Anatoly Gurbanov, Valery Golubkin and Alexander Kuranov on charges of treason and transferring sensitive information.

Much of the R&D on hypersonic technologies is done by the China Academy of Aerospace Aerodynamics, along with China Aerodynamics Research and Development Centre. China’s hypersonic vehicles include a glide-boost Dongfang-17 (that appeared in the October 2019 military parade at Beijing), a possibly air-breathing N-capable Xingkong-2 (tested in 2018) and other models.

China’s missile technologies development was led by Qian Xuesen, an MIT and Caltech product, who developed the country’s strategic weapons programme. The recent civil-military fusion programme channelised civilian talent into developing such technologies. The “thousand talents plan” since 2007 likewise recruited scientists from abroad, including from the US.

China transited from passive missile interception technologies in the 1980s to active mode in the last decade, ironically based on US and Russian inputs, surreptitiously acquired over a period of time. The Cox Report accused the US space company Loral & Hughes, for instance, of transferring satellite guidance systems to China in the 1990s. Many Chinese scientists involved in hypersonic technologies work with their counterparts in the US and Russia.

China’s tests are worrying the international community as it has been a free-rider so far, with no responsibility in regional and global orders. China is not part of the strategic arms reduction pacts between the US and Russia and has embarked on increasing its nuclear warheads. Recent reports say China has increased the number of missile silos at Yumen and Hami in its western region.

The 1967 Outer Space Treaty, of which China is a signatory, bans nuclear weapons and other WMD in space, but it has no implications for hypersonic vehicles as they move in low-earth orbit. China conducted an anti-satellite test in 2007 and exo-atmospheric missile interception tests since January 2009 and has acquired considerable capability in space weapons.

For India, China’s hypersonic glide vehicle demonstration poses multiple challenges, including the proliferation of such technologies to Pakistan, the opening of a “two-front war under nuclear threshold”, and the penetration of nascent Indian missile defence systems. These are compounded by the strain in bilateral relations since May last year. China continues to dodge the February 10 agreement to disengage troops all along the border.

Read another piece on world emerging power titled Amid signs of Cold War 2.0, China ups ante to be recognised as world’s pre-eminent power in Impri Insights.