Home Insights Amid great power competition, what Delhi and Moscow mean to each other...
Facebook
Twitter
WhatsApp
Linkedin
Email
Print 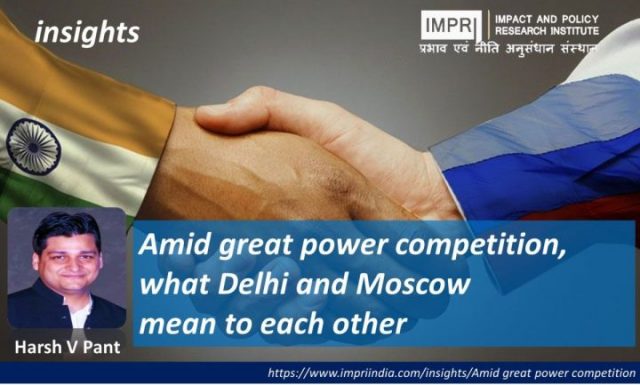 As it balances China’s rise and builds a strategic partnership with the US, India would like to invest in a stable relationship with Russia.

Even as India gets ready to participate in the Summit for Democracy convened by United States (US) President Joe Biden, New Delhi is hosting Russian President Vladimir Putin for the 21st India-Russia annual summit with Prime Minister (PM) Narendra Modi. This will be Putin’s first visit abroad for a bilateral meeting in person ever since the onset of the pandemic, underscoring the importance he attaches to maintaining robust ties with India.

Russia’s foreign minister Sergey Lavrov and defence minister Sergey Shoigu will also be meeting their Indian counterparts for the inaugural 2+2 ministerial dialogue. With this, Russia will become the fourth nation, along with the US, Japan and Australia, with which India has such a joint structure in place. A logistics support pact is likely to be concluded, similar to the one India has signed with Japan and the US. Ignoring the threat of US sanctions, India’s procurement of the S-400 Triumf Missile Systems stands testimony to the solid India-Russia defence engagement. A deal worth over ₹5,000 crore with Russia for the manufacture of AK 203 assault rifles is also in the pipeline. India, clearly, has no intention of downgrading ties with Russia.

For Russia, maintaining strong ties with India is important to signal to China that Beijing is not the only game in town. Russia-China engagement is a product of their joint opposition to the West. But Russia’s seven-decade-old robust ties with India cannot be jettisoned that easily. For all the testiness on the Indo-Pacific and the emergence of Quad, Moscow values a partner such as New Delhi that has demonstrated its ability to maintain its strategic space by standing up to China along the border as well as challenge the US on defence ties with Russia. Russia did not cease its defence engagement with India even during the Sino-Indian border crisis last year, though China had reportedly expressed its displeasure.

New Delhi understands Russia is critical in the regional and global balance of power. Last month, India hosted the regional dialogue on Afghanistan which saw Russian participation along with Iran and the Central Asian Republics. The convergence on Afghanistan is remarkable given that Moscow was quite supportive of the Taliban in the initial days. There is quite a distance from wanting to see the Americans out to managing the negative externalities emanating from the Taliban takeover. And not surprisingly, Russia has moved closer to the Indian assessment of regional security. For its part, New Delhi has been sensitive to Russian core interests as exemplified in its UN vote last year against a Ukraine-sponsored resolution condemning human rights violations in Crimea.

As global structural realities undergo a fundamental transformation with the rise of China, both Moscow and New Delhi are trying to figure out their responses. Despite the Cold War legacy, Russia has moved quickly to cement ties with China. India, too, has witnessed the withering away of the “hesitations of history” when it comes to the US and the wider West. India’s growing weight in the global order ensures that its ability to navigate great power politics is much stronger now.

As it balances China’s rise and builds a strategic partnership with the US, India would like to invest in a stable relationship with Russia. The India-Russia engagement is responding to today’s geopolitical imperatives, not of the past. Devoid of yesteryear’s sentimentalism, this is a relationship grounded in pragmatism. This ensures that while New Delhi can do little about Moscow’s gravitation towards Beijing, it can insulate its own burgeoning ties with the US from the overweening presence of Russia.

Describing India-Russia relations “amongst the steadiest of the major relationships in the world after the Second World War,” external affairs minister S Jaishankar has suggested that “more than its contemporaries, it has withstood the test of time, finding new convergences with changing circumstances”. As long as the two nations can continue to find these new convergences, their bilateral relationship will continue to respond to the changing circumstances.

Read at: Hindustan Times | Opinion | Amid great power competition, what Delhi and Moscow mean to each other | Harsh V Pant | 5 Dec 2021