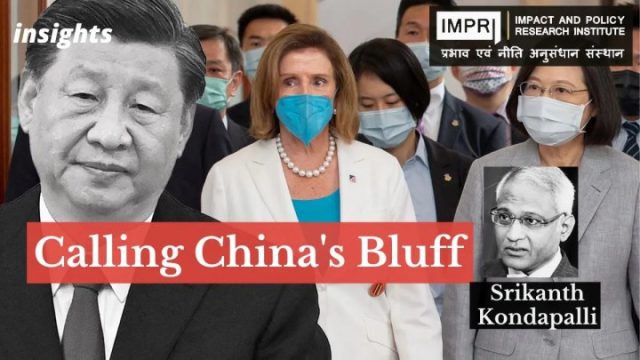 Nancy Pelosi, the Speaker of the United States Representatives, called off China’s bluff on “playing with fire” by visiting Taiwan on 3 August, amidst the latter’s coercive diplomatic pressures. Nancy Pelosi’s defiant, but unannounced, visit comes in the wake of China’s uncalled for, politically disastrous and military indefensible, escalation for the past few years.

Pelosi praised Taiwan’s bubbling democracy and called the beleaguered island a friend and defended it in her speeches during her whirlwind less than a day visit. Even though China threatened to retaliate to the visit, Pelosi continued her visit nonchalantly making China to blink first in this round.

The political fallout of Pelosi’s visit on China’s domestic politics is higher than on Taiwan or the US. President Xi Jinping since his ascension in 2012 has been making caustic comments on Taiwan, with the 2017 19th Communist Party Congress stating that “We will never allow anyone, any organisation, or any political party, at any time or in any form, to separate any part of Chinese territory from China!” Further at the communist party’s centennial in July 2021, Xi even threatened to “break the heads” of those who interfere with Taiwan.

As China now could not stop Pelosi’s visit, the 20th communist party congress this November, where Xi is seeking a third term, could become decisive. Naturally the upcoming Beidaihe meeting of high-level party leaders and elders could be stormy. The timing of Pelosi’s visit could not be worse for Xi. Rival political factional leaders like Jiang Zemin, Hu Jintao and others are up in arms with Xi for many reasons but the Taiwan fiasco could provide them with enough reasons to counter Xi.

With massive restrictions due to “zero Covid” policies, several millions of Chinese are in partial or complete lockdown with hardships. The economic growth is declining due to these policies and due to the on-going tariff wars with the US. While Xi banked on nationalism and anti-corruption drive to protect himself so far, the escalation on Taiwan could prove to be costly.

Also, Pelosi’s aircraft landed in Taiwan with the US Air Force flight escort, thus puncturing one of China’s original “three nos” — that Taiwan should not become independent, no foreign troops in Taiwan soil and no to Taiwan’s nuclear weapon programme. With such military aircraft landing in Taiwan, China’s inability to stop such landing not only exposed China’s weakness but also for possible defiance by other countries in future of such red lines by China.

Pelosi was also signalling that China’s recent forays in Asia will be checkmated. In May 2014, addressing the summit meeting of Conference on Interactions in Confidence Building Measures in Asia (CICA) at Shanghai, Xi Jinping suggested that “outside” powers should withdraw from Asia for the eventual imposition of Chinese hegemony. Since then, China’s aggressiveness on South China Sea islands disputes, over Senkaku islands with Japan and on land borders with India knew no bounds. Pelosi not only indirectly questioned China’s ability but also its credentials for the claims.

In the aftermath of Pelosi’s visit, China had deployed naval and air forces in six maritime regions close to Taiwan as an intimidating tactic. There are also reports of Chinese cyber-attacks on Taiwan’s foreign ministry, banks and certain market stores, besides banning certain food products. With or with the US tacit support, Taiwan could weather off this challenge.

For Taiwan, Pelosi’s visit could be a major turning point in its strategic direction, both at the domestic and external affairs. At the domestic political level, the majority “status quo” public opinion in the political spectrum could change towards an active assertion of Taiwan’s identity far away from China. More the Chinese coercion, more would be the critical responses of the Taiwanese in the near future.

At the foreign policy level, the US ambiguous policies could change towards more clarity and purpose in defending Taiwan and its democratic system. Taiwan’s joining of the emerging Indo-Pacific could also be fructified in this milieu. Thus, “internationalisation” of Taiwan issue is likely to pick up pace, as 300,000 who watched Pelosi’s flight path in anticipation indicated. If Taiwan had to go through seven decades of uncertainty, Pelosi’s visit nudged this process for more clear outcomes in the near future.

During the Russian invasion of Ukraine, many analysts suggested an imminent Chinese invasion of Taiwan. Pelosi’s visit not only questions this assumption by politically providing American support to Taiwan but provides Taiwan with an opportunity to explore friends and allies in the international system. This could also further intensify the ongoing New Southbound policy’s outreach soon.

This article was first published in News18 as Nancy Pelosi’s Visit to Taiwan: Need to Stand Up to China and Call Its Bluff on 7 August 2022.