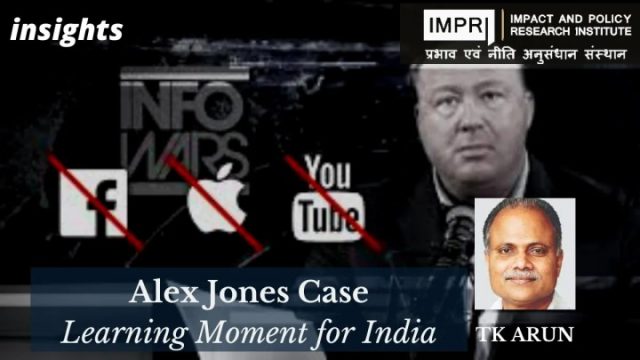 Alex Jones shows they also serve, those who only stand and lie — provided observers learn the right lessons from where a functional legal system lands the liar.

Alex Jones, a United States entrepreneur, radio host, Donald Trump supporter, and spreader of conspiracy theories, has been fined $45 million in penal damages, and $4.1 million in compensatory damages for the hurt he inflicted on families of schoolchildren who had been shot dead in the 2012 Sandy Hook school massacre.

This is significant, not only for the media in the US but also for media around the world. Falsehoods, which spread online with grievous effects on some people, can be nailed in the courts and their purveyors, brought to book — that is the clear message.

Jones has two more prosecutions to survive, for the same lie, in which different sets of parents are suing him, and he might accumulate even higher penalties. If fake news can be nailed in the US, where the Supreme Court has generally chosen to protect hate speech as an exercise of the right to free speech, why can’t fake news be nailed in India, and other countries; and those who spread fake news held personally accountable, through the judicial process?

All Jones did was exercise his First Amendment right to free speech, and denounce the school shooting as an elaborate hoax staged by the government, in order to strip Americans of their Second Amendment right to own guns. He described grieving parents as actors and collaborators with US’ deep state.

Jones hosts a show called The Alex Jones Show and owns a channel called Infowars. On the channel and the show, he puts out conspiracies, supplements, conspiracies, survival kits (US conspiracy theorists hold the end is near, and that every sane person must prepare for the apocalypse, swift evacuation, and prolonged hibernation), support for Trump, more health enhancement products, more conspiracy theories, and yet more prepper kits (Be Prepared, grown-up Boy Scouts). If this sounds crazy, the net worth of several hundred million dollars he built up from peddling conspiracies is all regular money.

In December 2012, 10 days before Christmas, 20-year-old Adam Lanza shot his way into the Sandy Hook Elementary School in Newtown, Connecticut, some 100 km away from New York, and killed 20 children aged 6-7, and six members of the school staff, who tried to protect the children, before he shot himself in the head. Before driving to the school with his mother’s rifle, he had shot her dead.

The US went into shock and outrage, and then US President Barack Obama gave a speech on empathy and the need for gun control. Jones described the shooting as a hoax, with which the federal government wanted to curtail US’ gun rights. Jones’ words were reaching millions of his listeners and admirers online.

Many of them trusted him implicitly. Some began to go offline, harass the parents of the children killed in the shooting, shouting abuses at them, firing shots into their homes, etc. At least one parent moved homes, time and again.

Some parents sued him for the pain and hurt caused by his portrayal of the wanton killing of their children as a hoax. He did not cooperate in the prosecution, choosing, instead, to use his online platform to damn his persecutors.

At one stage in the prosecution, Jones’ lawyer accidentally sent two years’ worth of phone records to the plaintiffs’ lawyer, containing information that clearly showed that Jones had lied under oath. In the end, Jones admitted that the shooting was real and apologized — all the while maintaining that it was his right to say what he felt like saying. His jury was not convinced and recommended huge damages.

In the US, it is near-impossible to sue media outlets for libel. The celebrated 1969 Supreme Court ruling in the so-called Sullivan case laid down some norms for determining whether a media report was slander or an exercise of the right to free speech in the case of public persons. It had to be established that the reporter knew the content of the report to be false or the reporter showed reckless disregard for the veracity of the allegation in the impugned report.

The mere occurrence of factual inaccuracies in the report would not justify the charge of libel. Initially, the Sullivan principles were applied in the case of public officials; later, this was expanded to cover public persons, including companies.

This is why an ecosystem of fake news thrives in the US. Some news channels and websites put out fake news or misinformation, which other websites would pick and run with—and this would happen even after the news channel/website which first published it retracts the story. By then the story would have found its way into social media and messaging platforms and circulate for a long time to come.

Social media platforms make money from audiences sticking around. Once their algorithm determines that a person likes a particular kind of story, they would be plied with an endless stream of related stories, after reading each one of which they would steadily grow ever more convinced about the first story. They might even come across the retraction of the story by its original authors, but simply keep reading its interpretations, embellishments, and prognostications.

This is a major part of the explanation for the strong belief among a large proportion of Trump supporters in the preposterous claim that the 2020 US election results were manipulated, and Trump actually won it. Those who believed this fervently and were willing to take up arms to defend their nation’s democracy rioted in the Capital on January 6, 2021, in an attempt to prevent US Congress from ratifying the election results.

That India suffers from the self-same problem of people being misled by false news propagated on social media eco-chambers is not in doubt. Can defamation charges be used to put an end to fake news and its spread?

Unlike in most other parts of the world, defamation in India can be tried as both a criminal offense and a civil offense. The civil offense is penalized with fines and penal damage. The criminal offense entails imprisonment, apart from fines. In India, the process itself can become the punishment, often undeserved — as attested to by the acquittals of any number of people arrested, denied bail, charged, imprisoned, and, eventually, acquitted after having spent years rotting in jail. Charging journalists with criminal defamation has become a way to curb the enthusiasm of would-be investigative journalists.

If India needs to check the ongoing population explosion of indigenous Alex Joneses spewing hatred and misinformation, it needs to remove criminal defamation from the statute, and make prosecution of civil defamation both expeditious and in conformity with the high bar of actual malice in reportage — i.e. defamation will subsist in the challenged report having been produced with the knowledge that it was false or that the reporter showed reckless indifference to the veracity of the report.

The Supreme Court of India dismissed, in 2016, a legal challenge to the validity of the criminal defamation statute. The court argued that the right to life implied the right to a decent reputation, and therefore, defamatory allegations that damage a person’s reputation should be taken as a grave offense.

It is because the courts are too slow to settle civil claims for damages arising from defamation that criminal defamation charges gain appeal. Special courts can be set up to speed up civil defamation suits, till such time as all cases are heard and disposed of in a matter of months, rather than decades. This would allow the defamation charge with actual malice to act as a check on online disinformation.

This article was first published in Moneycontrol as Lessons for India to learn from Alex Jones Case on August 8, 2022.

Is the Ukraine War the Only Reason for Rising Inflation | July 22, 2022