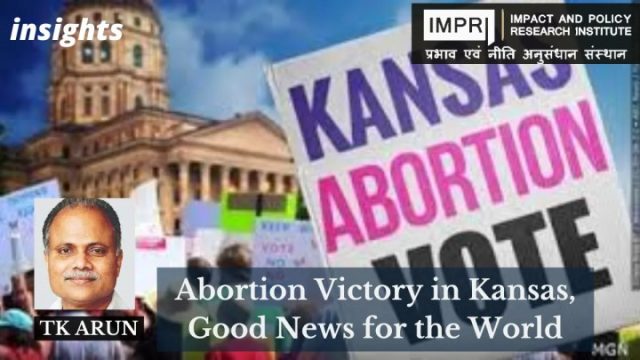 The people of Kansas have, by firmly rejecting a Republican proposal to ban abortion, opened the path to the Democrats’ retention of power.

Kansas is a smallish state by American standards, with an area that is 144 times Delhi’s and a population that is fewer than one-sixth Delhi’s –  the people of Kansas number 2.9 million, about as much as you find in a largish suburb of New Delhi. But the people of Kansas are now poised to make an impact on the world that few nations can hope to have — a positive impact, to boot.

When they hear ‘Kansas,’ most Indians might think of Dorothy and her dog Toto, and their exciting journey to the Wizard of Oz, and of little else. But Kansans, as they call themselves, have done something remarkable: they have turned American politics upside down. In a referendum on August 2, the good people of Kansas rejected, 58% to 42%, an amendment to the state’s constitution that would have enabled laws to ban abortion.

Kansas is a Red state — no, not Maoist, but conservative. Red is the colour of Republicans, while the Democrats favour blue. The incumbent legislature is Republican-dominated: they have a supermajority in both houses of their bicameral legislature. The state’s governor, right now, is a Democrat, however.

So, when the US Supreme Court overturned the legal status of abortion as a constitutional right for all American women, instituted in the famous Roe Vs Wade ruling of 1973, and deemed it a matter for individual states to legislate on, the state’s Republican legislators wanted to amend the state’s constitution, which protects a woman’s right to abortion up to 22 weeks, with some qualifications. They chose to hold a referendum for this purpose.

They decided to hold the referendum along with the state’s primary elections, in which Democrats and Republicans choose their candidates for the federal legislatures. Turnout is usually low in the primaries, and especially so in the case of Democratic voters. This was expected to facilitate the amendment’s passage.

Many campaigners for abortion rights made sure that voter turnout was high. They tapped into a vein of individual liberty that the ‘abolish abortion’ side was only too happy to trample on in the case of women.

What the Kansas referendum shows is that abortion rights are potentially a major political plank that the Democrats can use against the Republicans in the forthcoming mid-term elections and the 2024 Presidential elections.

At a time when everyone assumed that abortion was a constitutional right in the US, it was okay for women in Republican-dominated states to go along with the commonsense that abortion is against God and religion, against family values, against motherhood and apple pie. But once the conservative majority of the Supreme Court threw out Roe vs Wade, women anywhere in the Red states face the prospect of losing whatever bodily autonomy they have.

Their right to choose, whether they want to carry a pregnancy to term, even when they are not in a position to assume the responsibilities of motherhood, or to abort that pregnancy, could be taken away by Republican-dominated state legislatures. This contradicts the fundamental right to life, liberty and the pursuit of happiness that the American dream holds out to all its citizens (neither women nor black people were included among those blessed with those guarantees when the Declaration of Independence, which contains this rousing promise, was made).

In elections, the past matters

This should have been obvious to the Democrats, but surprisingly not. So demoralized have they been, with the President’s sagging popularity, high prices and consecutive quarters of negative economic growth, that they saw their best hope in further indictments of Republicans for the January 6, 2020 insurrection.

In elections, the past matters when it is linked to the future by means of a powerful narrative. People do not live in the past or for the past. They want a better life for themselves and theirs, and elections are all about what will happen in the days to come.

For American women, what will happen is clear: if Republican politics prevails, they will lose several degrees of freedom in their personal lives and careers. Emancipation of women sounds like an orphan who has wandered into the present from its forlorn habitat in the late 19th century. But that is what is at stake for Americans, in the aftermath of the overturning of Roe vs Wade.

It should not be all that difficult for the Democrats to turn abortion into an election issue that transcends partisan politics – for an external observer. But, divided as they are between the so-called progressives and the centrist pragmatists, their political vision spliced into budget arithmetic and lacking a leader who can project a unifying, edifying vision for all Americans, Democrats have so far refused to see what has been staring them in the face.

The people of Kansas have changed this. Their large turnout and rejection of aggressive campaigning by the church and other conservative elements have released a number of Democrats from a visual handicap the eye doctor calls hypermetropia — the inability to see something right next to them. Long vision is an eye defect, distinct from the virtue of farsightedness.

Right now, the Republicans are poised to win a majority in the House of Representatives and in the Senate. Ex-president Trump is in the reckoning to become Ex-Ex-President Trump, come 2024. A lot of American voters are prepared to welcome his return to the White House.

Even without Trump at the helm, today’s Republicans are a reality-denying, conspiracy-mongering, climate-threatening, isolationist bunch who mistake successful fooling of the politically naïve American public for a licence to disdain the world. Trump had, it may be recalled, described African countries as shitholes, cut off funding for the World Health Organisation in the middle of a pandemic, and abandoned America’s Kurdish allies in the war against the Islamic State, leaving them to the tender mercies of Turkey’s would-be heir to the Ottomans and carried on with a North Korea policy that prompted both Japan and South Korea to re-evaluate the solidity of American security guarantees.  A Republican presidency in the US in 2024 would be bad for the world.

It would erode the world order underpinned by American hyperpower before a number of alternative power centres are ready to keep order in the world that would follow. India and Europe, for example, both need some more time to emerge as credible geopolitical power centres. The implosion of American power, a foretaste of which was delivered by President Trump when China is ascendant as a global power would be bad news for the world.

The good news is that the people of Kansas have reduced the probability of that eventuality by a considerable margin.

This article was first published in The Federal as Abortion Ban Law: Good News for the World, Datelined Kansas on August 5, 2022.