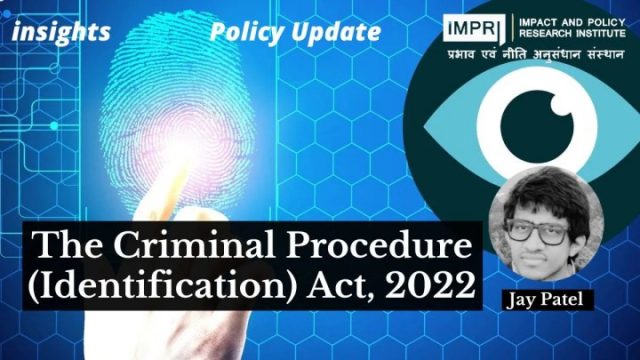 The Criminal Procedure (Identification) Act, 2022 (hereafter referred to as CPIA) replaces the century-old “The Identification of Prisoners Act, 1920” (hereafter referred to as IOPA). The reasons for the new law state the inadequacies of IOPA regarding the limited access to the types of measurement, lack of incorporation of modern scientific techniques, to increase the ambit of the people whose measurements can be taken, and argues that these would strengthen the case against the accused by bringing in new evidence (purportedly, to increase the conviction rate in turn) hitherto unavailable or difficult to get.

It is important to look at the implications of this new act in relation to the recognised rights of the individuals (not only limited to the privacy question) and also in relation to society, collectively.

Now let us look at three important definitions that CPIA provides us:

The present act raises more questions than it answers. Ignoring the doctrine of parity, it tries to make no difference between a detainee held for a protest and a person convicted of a more serious offence, for, in either case, the measurements can still be collected, with the caveat that in the former case the biological samples might not be collected but other measurements still cannot be refused.

It is also important to note that a person’s DNA can reveal many a thing about them, including their health issues, behavioural traits, blood relations and much more; it becomes essential to have strong safeguards to prevent its misuse and maintain accountability for the same.  There should be penal provisions to hold individuals and agencies accountable in case of any failure or misuse on their part.   To conclude, the fairness principle, the substantial idea of justice, and other constitutional provisions need to be considered in the act or in the rules yet to be framed, without which the potential for misuse remains high.