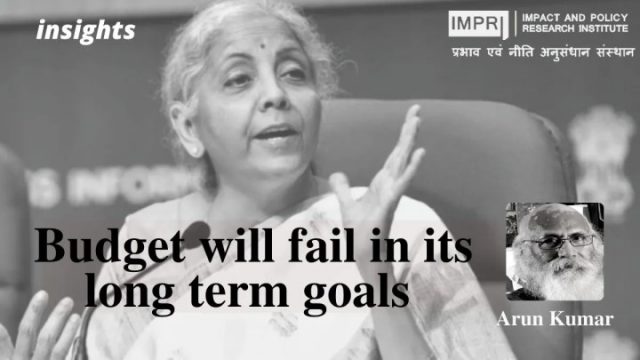 The buzz around the Union Budget 2022-23 is that it is for long-term growth. The Economic Survey 2021-22 had flagged that the government is following `supply-side policies, and the budget is in the same mold. The finance minister announced at the outset that her focus is the next 25 years – from the present 75th year after Independence, to the centenary in 1947 – the ‘Amrit Kaal’.

The Economic Survey had talked of the Bell bar pattern of investment which implies that one plan for the long term and the immediate. Unfortunately, the budget is entirely focused on the former and not the latter immediate which is witnessing a crisis of unemployment, loss of incomes of the bottom 60 percent of the population (including farmers), and closure of many businesses, especially in the micro and small sectors. In other words, currently, the vast majority of Indians face a crisis.

Businessmen have appreciated the budget and stock markets immediately celebrated with an upsurge. The promise of a big increase in infrastructure spending under PM GatiShakti will see a lot of money come their way. So will the PLI scheme which is a kind of subsidy for producing more. This is called an incentive but is effectively a subsidy to reduce costs. The biggest plus of the budget for businesses is that the much-feared increase indirect taxes, corporate tax, and income-tax, have not materialized. So, the high profits the corporate sector has been making during the pandemic will not be hit.

There has been pressure to reintroduce the wealth tax, but that has also not been announced. So, the increase in wealth due to the rapid rise in the stock market prices remains untouched. After all, there were persistent calls to tax those who have gained to provide for those who have lost out during the pandemic. All this must have come as a big relief to businessmen. After all, this kind of strategy had led to a slowdown of the economy for eight quarters from an eight percent growth rate to 3.1% pre-pandemic.

There is little point in claiming that we are the fastest growing economy among the G20 – it may be good optics, but is not relevant. The worry is that the unorganized sector and the contact services like hospitality, travel and tourism, have not yet recovered. Consumer sentiment is at about 60 which is much below the pre pandemic level of 105. And, this is largely from the organized sector. That is why the capacity utilization in the organized sector remains below 70 percent.

Unfortunately, the government is doing little to change this situation and is planning on the basis of its own faulty data. This is proving to be fatal for policy. How much is the boost to the economy?

HOW MUCH IS THE BOOST TO THE ECONOMY?

The budget is doing little to boost incomes for the bottom 60 percent of the people or attempt to increase employment for this section. The youth protests and farmers’ agitation points to the urgent need for these steps.

The budget shows a nominal increase of 4.6 percent in the total allocations from Rs.37.7 lakh crore to Rs.39.4 lakh crore. Adjusted for inflation of 5.5 percent shows a decline. Further, the allocation for capital account expenditure is shown to be 35 percent higher over the BE of Rs.5.54 lakh crore. This is not likely to materialize.

Up to November 2021, the CGA report shows that not even half of this was spent. So, in the balance of four months, it is unlikely that the balance of 50 percent would be spent. The reason for the shortfall is that projects have to be ready to be implemented, including advance preparation. Obviously, they have not been ready so expenditures could not take place. That will happen again in 2022-23.

Since the allocation is proposed to be raised substantially, much more preparation is required and that is nowhere in sight and the increased allocation for capital expenditure is unlikely to take place. Thus, the two items that could have boosted aggregate demand are unlikely to do so. Will sectoral allocations deliver?

The same is the case with the health sector allocation which is stuck at Rs.86,000 crores. It is a shame that this sector will decline even though we witnessed a breakdown in the health infrastructure, not only in rural areas but also in the Metros. The finance minister says that the Atmanirbhar Bharat package will create 60 lakh jobs. This is the entire package being proposed and will most likely be spread over five years. This is grossly inadequate considering the backlog of unemployment which needs to be catered to, leave alone the at least 15 million youths who enter the job market every year.

In the short run, MGNREGS should have been expanded and an urban employment scheme needed to be started, but that has not been proposed. The allocation for MGNREGS has been cut from Rs.98,000 crore to Rs.73,000 crore. Even though the government knows that workers are on average getting only around 50 days of work rather than 100 days of work. There are also complaints that wages are delayed and that many are not able to get any work. Cut in food subsidies means that the support that the poor were getting will be less than last year so their purchasing power will decline.

Thus, in the short run, with weak employment generation for the poor and less support to their incomes, demand will remain weak. Consequently, capacity utilization will remain low and so would investment which will mean that the growth rate will not pick up even to the declining trend rate pre-pandemic. Clearly, the budget just presented will not help overcome the immediate crisis facing the economy. Social protests will aggravate and the long-term goals announced are not likely to be achieved.

The article was first published in News Nine Budget 2022-23 a guide to how not to achieve long term goals.

Read another piece on NGOs, FCRA, and Foreign Funding in National Interest by Dr. Arun Kuam in IMPRI insights.

Read another piece on Cryptocurrency by Dr. Arun Kumar titled Decoding the Cryptos in IMPRI Insights

Read another piece on a sustainable development model by Dr. Arun Kumar titled This Path of Development is Toxic in IMPRI insights.