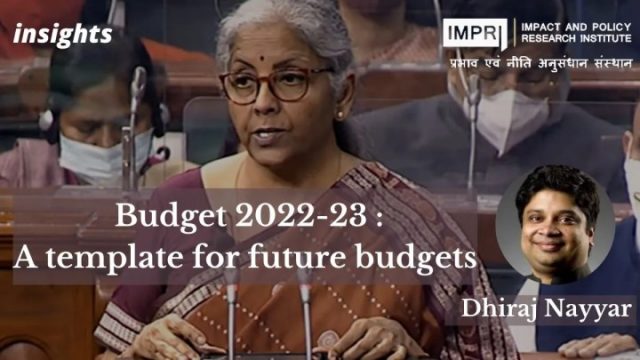 At the start of her fourth Budget speech, Nirmala Sitharaman said that she would be laying out a blueprint for the next 25 years. Interestingly, over the next 90 minutes, she also laid out a blueprint for an ideal budget. At its core, the annual budgetary exercise is a statement/instrument of the GoI‘s fiscal policy, made up of its expenditure and revenue plans. Fiscal policy is important to meet different objectives, primarily growth and redistribution, but also inflation and current account deficit (CAD). In the current economic climate, the primary challenge is sustaining growth even while uncertainty on the future course of the pandemic prevails.

In such a scenario, the revival of consumption and investment, the two main drivers of growth in the economy, may take a while longer. Hence, fiscal expansion/government spending must occupy the driving seat.

GoI had a choice between boosting either its revenue expenditure (say, by announcing income transfers) or its capital expenditure (by building more infrastructure). It chose the latter. There is a good reason for that choice. The secondary, looming challenge in the macroeconomy is inflation. For now, the cause is external on account of spiking commodity prices, including oil. A big consumption stimulus in a supply-constrained economy could add to inflationary pressures. So, the GoI has chosen the right path to stimulate growth.

It has also done the right thing by not applying a fiscal squeeze, allowing this year’s fiscal deficit to touch 6.9%, and projecting next year’s deficit to be 6.4%. The path to fiscal consolidation will be gradual and is entirely appropriate following the pandemic-induced shock.

From a political point of view, the GoI could have been tempted to inject the budget with a dose of populism. After all, five assembly elections are around the corner. There were two obvious choices; either to announce a new scheme or seriously enhance an existing one or to cut direct tax burden for individuals. The former, which would have involved a new income transfer scheme or increasing NREGA spending, would have targeted rural voters and lower-income groups. The latter would have enabled outreach to the urban middle classes.

Given the macroeconomic situation with growth uncertain and looming inflation, neither would have been prudent. Of course, they might have brought short-term gain. So, all credit to GoI for resisting ‘electoral compulsions’.

Each year, stakeholders look forward to direct and indirect tax proposals for ‘relief’. This year, there were some import duty changes, but direct taxes were mostly untouched (except for cooperatives). Hopefully, GoI will stop tinkering
with import duties as well and remove all surcharges and cesses soon, rendering this part of the budget uninteresting but making the tax system an enabler of impressive economic performance.

The way GoI views the future trajectory and shape of the economy is
interesting. Given the momentous changes likely to take place across the global energy transition, technological shifts, and altered geo-economics post-Covid this is important. Narendra Modi has always been a forward-looking politician. His commitments on climate change at COP 26 were path-breaking from an emerging economy.

From now on, every budget should contain a section on climate change and energy transition like this one, which spoke of battery-swapping, charging stations, and additional production-linked incentives (PLI) for solar equipment. The green economy will create new opportunities for employment and a chance for India to become a leader in the sunrise sector.

Digitization is the other trend for the future. And it was good to see GoI’s focus
on this space, including the creation of a digital university. The FM also
showed that GoI was keenly looking at other emerging technologies like
drones that can be deployed for many activities, including farming.

In the last 18 months, this government has also laid to rest the notion that the budget is the only platform for major economic policy announcements. Indeed, structural reforms must happen continuously. That is a sign of a mature economy.