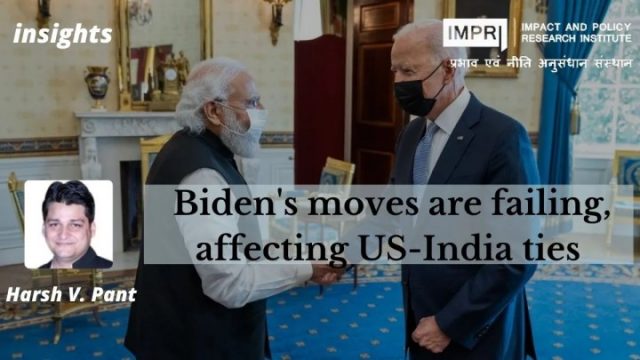 One year into office and the Biden Presidency is coming apart at the seams. Normally, United States (US) presidents enjoy a honeymoon period for a year, but Joe Biden’s leadership has been flailing since the disastrous withdrawal from Afghanistan in August last year. His two-hour marathon press conference last month — his second solo outing in almost a year in office — would have been a good chance to turn the message around. But it was symptomatic of all that his critics have alleged of being wrong with his style of leadership.

One year into office and the Biden Presidency is coming apart at the seams. Normally, United States (US) presidents enjoy a honeymoon period for a year, but Joe Biden’s leadership has been flailing since the disastrous withdrawal from Afghanistan in August last year. His two-hour marathon press conference last month — his second solo outing in almost a year in office — would have been a good chance to turn the message around. But it was symptomatic of all that his critics have alleged of being wrong with his style of leadership.

It was not only a performance that left much to be desired, but it also dangerously muddied the waters of the crisis brewing in Ukraine. Predicting Russia would invade Ukraine in the coming weeks, Biden suggested that “my guess is he will move in. [Putin] has to do something.” And then, he went further to underline that the US response might be different if Russia only staged a “minor incursion” into Ukraine, which Biden said, wouldn’t necessarily elicit much of a response.

“It depends on what (Russia) does, to what extent we will be able to get total unity on the NATO [North Atlantic Treaty Organization] front,” Biden commented, shocking not only Kyiv but also other American allies who have been struggling to come to a unified position on this tricky matter.

The White House later issued a clarification that the US would view any movement of Russian forces into Ukraine as an invasion, but Biden’s statements reflected poorly upon an administration struggling to get its messaging right. The damage was done and Biden’s lack of grip on his decision-making is making him vulnerable to pressure from at home and abroad.

At home, his support is hemorrhaging. Latest polls reveal that only 40% of Americans approve of the job he is doing and, even more alarmingly, only 33% of the independents, with whose support he won the presidency a year ago, view him favorably. As of now, just 28% of Americans want Biden to run for re-election in 2024, including only 48% of Democrats. It appears Biden has beaten Donald Trump and emerged as the most polarising first-year president.

The Covid-19 pandemic rages on and inflation is at an all-time high. But the polity remains polarised with the extreme Left and extreme Right dominating the policy conversation and the middle ground shrinking. Biden’s response to these numbers is simple: “I don’t believe the polls.” But the Democrats are jittery and if the present trends continue, the mid-term elections can deliver them their worst possible results.

The Democrats had promised a new America after Trump’s four long years. But that talk of renewal today seems from another era. The pandemic hasn’t been brought under control, divisions within the US are as potent as ever, America’s adversaries are challenging it every day and its allies remain unconvinced that Washington is willing and able to lead.

On the economic front, inflation hit 7% for the first time in 40 years and supply-chain disruptions have caused record shortages. While the Republicans and the Democrats both remain obsessed with their internal turmoil, the buck stops with the president, and Biden has, so far, turned out to be inadequate for the challenging times the US faces.

This domestic vulnerability of Biden is making a hash of his foreign policy agenda. His adversaries have got the measure of him and they have found him wanting. The Iranians have hardened their position on the nuclear issue; China has continued to put pressure on America’s allies, and Russia has managed to outsmart the US in Ukraine.

Biden’s key foreign policy priorities included strengthening democracy abroad and at home; forging a “foreign policy for the middle class” to enable the US to “win the competition for the future against China or anyone else”; and winding up the “forever wars” of the last 20 years. There has been some movement on the democracy front with the Summit for Democracy though its substantive achievements remain far from clear at this stage.

America’s national security and foreign policy structures have indeed been mobilized in support of the middle class but, here again, the results are yet to come as the economic distress at home underlines. The war in Afghanistan has certainly ended but the withdrawal process was an unmitigated disaster and its unintended consequences are reverberating across the world.

For India, however, the Biden presidency has not been disruptive, as many in India were expecting. In fact, there are many who had wished and still do that the Biden administration would speak up on domestic Indian issues. But Biden has followed his predecessor in building a partnership with New Delhi keeping in mind the rapidly evolving strategic realities in the Indo-Pacific. The two Quad summits, one virtual, and one in-person showcased a desire in Washington to strengthen this platform.

The growing consensus cutting across party lines in the US on strengthening ties with India has meant that presidential preferences have become relatively less salient. Challenges remain for sure from the sale of S-400 to trade (and now the crisis in Ukraine), but effective diplomacy has prevented them from emerging as stumbling blocks. Even on the tricky question of democracy, the conversation between New Delhi and Washington is one between two mature partners who are both struggling with their own problems even as they try to understand each other’s travails.

America needs a strong India in the Indo-Pacific as a partner. And India, too, needs an America that can sort its internal challenges to be able to pay attention to strategic realities. But one year into President Biden’s term, it is looking like it’s going to be a difficult road ahead.

This article was first published in Hindustan times as Biden is flailing. And it can affect India-US ties on 2nd February 2022