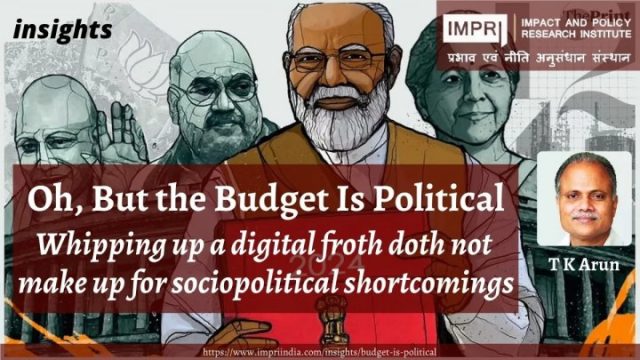 The budget gambles that the pandemic will retreat in the next couple of months and that large-scale state funding will strengthen recovery, visible in double-digit growth of capital good imports, strong export growth and improvement in the high-frequency indicators such as GST collections, cargo and passenger movement.

Those who think Budget 2022-23 skipped politics make the mistake of forgetting Narendra Modi’s obsessive focus on politics in every step he takes and every word he utters. The budget is, indeed, innately political, only not focused on the proximate assembly elections.

For Modi, UP elections matter, but not as much as the general elections of 2024. It is imperative for the BJP’s success in that round that the economy should get back to robust health, at least a year prior to that. The economy is not receptive to the turns of rustic phrases that flip a switch unleashing a torrent of sectarian passion the way the polity has been.

If the economy is not in a reasonable shape by mid-2023 at the latest, Indians may once again be drawn to some version of Indira Gandhi’s 1980 slogan, ‘For a Government that Works’, to which voters rallied and decisively threw out the Janata Party gaggle that focused more on infighting and less on governance.

In the year prior to the pandemic, economic growth had weakened to 3.7%, according to the latest official estimates. The pandemic intervened to take the blame for the economy’s steep fall in 2020-21. That low base helped growth look robust in the current year. But there is no guarantee that, left to themselves, the animal spirits of entrepreneurship would do anything more than skim money off the global liquidity sloshing through India’s capital markets, while singing praises of the powers that be.

Retaining voter appeal in 2024 means not leaving growth revival to chance. Therefore, it was imperative to use the budget to get growth going. And that has been the attempt, spending as much as 15.4% of GDP, whereas the average budget size during 2014-19 has been 12.76% of GDP, and keeping the fiscal deficit at a relatively high 6.4% of GDP to spend big.

The budget gambles that the pandemic will retreat in the next couple of months and that large-scale state funding will strengthen recovery, visible in double-digit growth of capital good imports, strong export growth and improvement in the high-frequency indicators such as GST collections, cargo and passenger movement.

The use of rhetoric is a clear sign of politics at play. Aristotle identified three types of rhetoric: logos, ethos and pathos. The first is devoted to fact and logic. Ethos plays on the credibility of the speaker/writer. Pathos appeals to the emotions of the target audience. Join them together in what those who cannot deliver rhetoric, and so study it instead, call the ‘rhetorical triangle’. The result is persuasion, motivation and conversion to the speaker’s point of view.

The budget’s rhetorical motif is ‘Digital’. The budget speech contained 35 iterations of the term. From digital payments and digital currency to digital health, digital delivery of farming knowhow and chip-embedded passports, the India of the budget is a digital ecosystem, and its leaders, embodiments of youth aspirations for emancipation from the wretchedness of jobless misery to a world of exponential possibility, symbolised by startups, unicorns and their mega public offerings.

You should blame the politician, if he does not utilise this possibility to deploy the rhetorical triangle to persuade the indigent and the unemployed that they stand on the threshold of emancipatory digital magic.

Digital is real. Logos is fully validated. The speaker is the harbinger of the one thing that is as certain as death and taxes. Ethos is a given. What of Pathos? Will a drone for the marginal farmer to spray cow urine on his crops as weedicide and natural fertiliser do, to give this Digital spiel a daub of tangible emotional connect? That has been provided. If only obtuse newspapers did not burst the bubble by carrying, alongside the Big Story on the Budget, that single column on yet another minor girl being raped, killed and cremated in a hurry under police pressure.

Why would a government that is so tech-savvy not give up the long-gestating optical fibre network spanning 250,000 village centres, that started off as the National Optical Fibre Network (NOFN), underwent a euphonic name change to BharatNet in 2014, was promised completion in two years, but has straggled on incomplete, only to be given a final deadline of 2025 by the budget speech? Why would it not choose to connect remote, hilly areas via low-earth-orbiting satellites, instead of by fibre optic cable?

Cable has to be laid in trenches, which have to be dug, for which contracts have to be given. The digging can be inaugurated, in thousands of villages. People can realise the politician is at work, bringing development. Contractors, diggers, cable haulers all make money, feel the reality of Vikas. This is politics in command, not penny-pinching economics.

If ending open-ended procurement was the goal of the late, lamented farm laws, the budget played politics by presenting excessive procurement at exorbitant support prices as an achievement, not policy failure. Do not accuse the present government of setting politics aside when it comes to the budget.

First published in the Economic Times titled Whipping up a digital froth doth not make up for sociopolitical shortcomings on 2 February 2022.