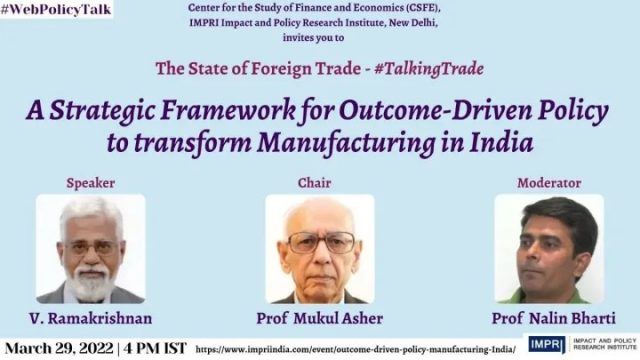 To discuss the state of trade, the Center for the Study of Finance and Economics of Impact and Policy Research Institute, New Delhi (IMPRI) organized a web talk as a part of the web policy talk series, The State of Foreign Trade – #TalkingTrade with V. Ramakrishnan on A Strategic Framework for Outcome-Driven Policy to Transform Manufacturing in India. The session’s moderator was Prof. Nalin Bharti, the chair was Prof. Mukul Asher, and the discussant was Mr Srikanth Rao.

India is threading on a different path by targeting other sectors and moving towards smart manufacturing. Atmanirbhar and self-reliance is not a new concept in India. The government has had a goal like this even in the past. However, the difference is that in the past import substitution model was used, and today India is looking at an export promotion model. Hence, the professor ends by saying there is a strategic framework to transform manufacturing in India

Prof. Mukul Asher, Former Professor, Lee Kuan Yew School of Public Policy, NUS, shares his experience of collaborating with management consultants. He mentions a lesson he learned from the management consultants is that they have a problem-solving approach and look at the outcomes. Problem-solving in a specific context and outcome orientation improves effectiveness. This is something academic economists do not necessarily emphasize on.

He provides some figures about the exports and imports of India. In 2021-22, exports of goods and services were $650 billion. This is the highest India has done. Imports were $700 billion and total trade: $1350 billion. The target is to reach $ 1 trillion by 2030. In 2021-22, Defense exports, a relatively new item, were $1.135 billion in the first 11 months. This is a six-time increase since 2014. This shows that there are structural changes taking place.

Engineering exports surpassed $101 million for the first time. They were exported mainly to USA, UAE, and China. Checking the contribution of the states in India, Gujarat and Maharashtra contribute 20 per cent each, Tamil Nadu 9 per cent, Andhra Pradesh and Uttar Pradesh 6 per cent. He suggests that the contribution range should be expanded. He also discusses the Export Preparedness Report published by Niti Aayog. Karnataka, Gujarat, and Maharashtra are on top among the coastal states.

The three challenges for export promotion mentioned are :

V. Ramakrishna, Managing Director, Organisation Development, Singapore, mentions that a lot of work is required in the manufacturing sector, to which India is not paying heed. He says that policy cannot be done in a vacuum. He says that strategic outcomes are a fundamental necessity to shape policy. For instance, if more support is given to the Electric Vehicle sector, then demand for forging and casting will drop by almost 70 per cent. That consists of nearly 80 per cent of the jobs in the automobile industry.

Hence, the outcome delivered by every strategy in an industry needs to be identified. He says that the Indian manufacturing sector needs to do a lot of work to transform. Skilling is of utmost importance and simply allocating money isn’t sufficient. Transformation is different from change. Transformation is irreversible, whereas change is an alteration of physical or mental states and hence, reversible. So, policy should look at bringing transformation and not only change.

The manufacturing industry in India does not contribute a significant share of the GDP, and the factor productivity is low, poor value addition, poor employment generation and quality of jobs, and deficient levels of innovation. The Indian MSMEs contribute to 8 per cent of the total activity, whereas in other countries, it is 40 to 45 per cent on average. The share of MSME in the manufacturing output is declining at 33 per cent now. Also, less than 4 per cent of Indian MSMEs have more than 500 workers, but in Japan, more than 70 per cent have over 500 workers.

Burning Questions regarding the manufacturing sector

Sir conducted a DIPSTICK survey and discussed a few results. Questions were asked to chairpersons, founders of companies, and young entrepreneurs regarding different aspects of the manufacturing industry.

1. What should India’s manufacturing strategy be?

2. What primary outcome does the Indian manufacturing sector have to deliver?

4. Why is productivity in MSME poor?

Sir also discussed the German or Japanese Model. A combination of the two, where the ethos is taken from the German Model, and the approach is taken from the Japanese Model, can help build the Indian Model. A combination of the two, along with a cultural shift, would be an ideal model for developing the manufacturing sector in India.

Finally, thoughts to transform manufacturing are form clusters combining corporates and MSME, focused Industry relevant role-specific skills,  mentor and coach entrepreneurs,  build flexibility and ability to adapt to changing market trends,  enable brand building as there is no brand for the manufacturing industry in India, loans can be cheaper,  and logistics.

Mr Srikant, Founder Director, Affordable Business Solutions, focuses his discussion on the importance of skilling. He says there exists a paradox because, on the one hand, there is a certain percentage who are unemployed and a particular share of disguised unemployment, which means individuals have taken up jobs that are not in their area of interest or not what they have studied for, and this share is increasing. But on the other hand, employers cannot hire those who are educated or skilled because they are not employable.

The question is why many individuals are educated, but less than 2 per cent are employable or employed in their training area. According to sir, employers are encouraged to use academic qualifications as a filter. However, the required academic qualification has no relevance to the job or the skill required. One problem in the manufacturing sector is that nobody wants to hire or train people. The motto is to automate, and nobody wishes to grow beyond 25 people.

V. Ramakrishnan adds to the discussion by saying that the labs in engineering, science and medical colleges are unused most of the time and can be utilized to train the trainers. Prof. Mukul Asher also mentions that one way to expand employment opportunities is to emphasize the diversity of languages in India. He says that Madhya Pradesh is starting MBBS and other medical courses in Hindi. Overemphasis on English is narrowing employment opportunities and using the language diversity, and also brings in local innovating thinking.

A question was posed, “what would be the possible strategy to raise the economy in the agricultural sector in tribal areas in terms of employment opportunities?”

V. Ramakrishnan answers the question by talking about the tribal villages in the Nilgiris. Sir worked with an NGO to promote organic farming in the villages. It was seen that the level of health and education is extremely backward. Even though the women are hardworking, they are anaemic, and the men take most of the money earned. So, he says that it should not be seen as a tribal area problem but a human development issue. Hence, education is the key. Prof. Mukul Asher agrees and adds that tribal area problems should not be looked at as one problem. As different tribal areas have a different set of characteristics, and hence, local context should be considered.

Prof. Nalin Bharti concludes the session by stating some points from V. Ramakrishnan’s discussion: India requires a transformation and not change. And Make in India should not be only for India but for the World. This complements the idea of the export promotion model. Apart from this, sir mentions specific points for Mr Srikanth Rao’s talk.

He pointed out two challenges the manufacturing sector is facing regarding skilling up. The first is how to skill up and then retain them in the same area. Finally, shares Prof. Mukul Asher’s points about the new items like defence and engineering products added to the export list. Hence, finally, the professor highlights the inclusion of different states in the export contribution. To ensure this political will, clarity in the policy and not looking for minor changes are necessary.