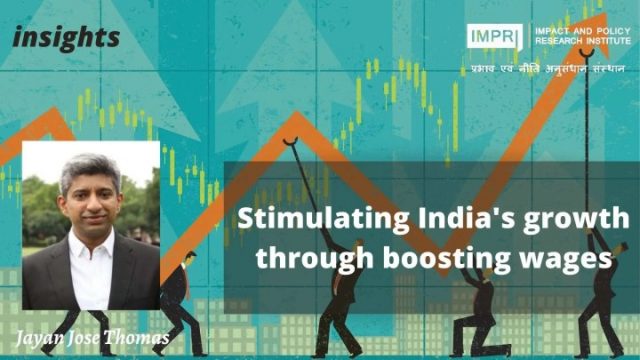 Impoverishment among English workers during the early years of the Industrial Revolution had prompted Leicester framework knitters to frame this resolution in 1817: “… if liberal Wages were given to the Mechanics in general throughout the Country, the Home Consumption of our Manufactures would be immediately more than doubled, and consequently every hand would soon find full employment” (cited in E. P. Thompson’s The Making of the English Working Class, 1963).

One of the moving images from today’s India is of migrant workers suddenly feeling desolate in their places of work and desperate to return to their villages, in the aftermath of the COVID-19 outbreak . The helplessness felt by the workers as seen from those images calls for nothing short of a radical rethink. We need to plan for an economic growth driven by rising — and not stagnant — wages, and a development model that is dispersed far and wide across the country, and not centered in a few big cities.

Out of India’s total workforce of 471.5 million, only 12.3% are regular workers receiving some form of social security, while the rest are mostly casual workers or petty producers surviving under various degrees of informality (figures for 2018). A vast majority of migrant workers belong to the category of informal casual workers. Available data on the size of the migrant workforce in India are rather patchy.

According to the 2011 Census, there were 54.3 million persons (workers as well as non-workers) in the country who migrated from one State to the other. The ‘heartland’ States of Uttar Pradesh, Bihar, Rajasthan and Madhya Pradesh accounted for 48.9% of these inter-State migrants, much higher than their combined share in India’s population (of 36.8%).

Workers migrate from villages to urban centers as the growth of rural incomes has not kept pace with the rising numbers and aspirations of the young in the countryside. Those engaged in agriculture and allied activities as a share of the combined workforce in U.P., Bihar, Rajasthan and Madhya Pradesh fell to 49.1% in 2018 from 64.1% in 2005. This meant that, between 2005 and 2018, 19.3 million persons left agricultural work in these four States alone and sought job opportunities elsewhere.

Workers’ shift out of agricultural occupations as well as out of their rural bases is set to accelerate, unless new economic opportunities are created in the countryside.

A majority of the workers who leave villages find themselves in the bottom rung of the urban economy, earning a precarious living as drivers, factory workers, security guards and domestic helpers. Their livelihoods are directly or indirectly linked to economic activities that cater to the demand from the relatively affluent in India and abroad (such as from industries producing sophisticated IT products).

Widening the demand base

Even as they work long hours often under exploitative conditions, informal workers manage to earn and consume only very little. According to the official consumption-expenditure surveys (for 2011-12), the richest 5% accounted for as much as 64.4% of the value of overall consumption of durable goods (such as of furniture or refrigerators) in urban India. The share of the poorest 50% was only 13.4%.

The COVID-19 pandemic is set to cause long-term disruptions to the existing structure of demand dominated by the consumption of a privileged few. Economic activities have now been halted for weeks on end, and no end seems to be in sight for the downward slide in export demand, which began with the U.S.-China trade tensions. Businesses in India and elsewhere are concerned that even after the lifting of the lockdown, they will have to operate at a fraction of their installed capacities due to the sagging demand conditions.

The crisis in the economy can be overcome only by widening the sources of demand, by raising the consumption of and investment for the poor. Consider, for instance, the setting up of industries linked to food processing or affordable housing in rural areas. The multiplier effects of such investment will be huge. Food processing can help boost farmer incomes, reduce food spoilage, create rural employment and, above all, improve the availability of nutritious food to the needy.

Broadening the demand base requires policies that differ fundamentally from conventional economic ideas. The mainstream argument has been that firms should try to reduce costs by squeezing wages. But cutting wages will shrink markets further and deepen the crisis during a depression. Instead, firms should assist in raising workers’ wages and incomes, and thereby, in enlarging the size of the markets. Even with higher wages, profit rates will not dip because the larger demand allows firms to utilize their capacities better.

For rejuvenation of demand, it is critical that governments increase spending on the economy, in areas such as infrastructure and innovation. Government spending can boost the “animal spirits” of the private investors, as had been suggested by John Maynard Keynes amidst the great depression of the 1930s.

The ideas of Keynes and his followers had helped to fuel an unprecedented economic boom in the U.S. and European countries for almost three decades after the end of the Second World War in 1945. A striking feature of this ‘golden age of capitalism’ was that the real wages kept rising, providing the much-needed succor to the working classes, who had long suffered due to the war and the inequalities of the depression years.

Battered by an oppressive economic system and now by an unpredictable virus, India’s working classes deserve long-lasting relief and comfort. What is needed is a massive expansion in government spending, which will uplift workers’ skills as well as their incomes and purchasing power. This will include investments in healthcare, education, roads, rural infrastructure, agricultural research, public transport, and so on — perhaps similar in scale and ambition to the post-war reconstruction efforts in western nations following the Second World War.

A grave challenge to future growth are the ageing demographic structures in most parts of the globe. In such a context, the rising numbers of the young in India, especially in its northern and eastern States, offer a potentially new source of demand that could sustain the economy over the next few decades. Lifting the wages and the spirits of the wearied Indian worker could just be the dose required to bring cheer to the Indian and the global economies.

First published in The Hindu ‘Boost wages to stimulate India’s growth’ on 06 May,2020.