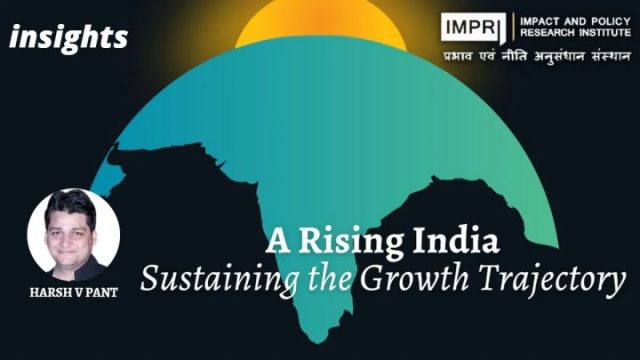 In December 2022, the World Bank revised upwards its GDP growth forecast for India to 6.9% for 2022-23, underlining the fact that the Indian economy was showing higher resilience to global shocks. In its India Development Update, the World Bank said the revision was due to the higher resilience of the Indian economy to global shocks and better-than-expected second-quarter numbers.

Earlier, India had emerged as the world’s fastest-growing large economy and replaced Great Britain as the world’s fifth-biggest economy. The long-term trajectory of the Indian economy seems set with India expected to emerge as the world’s fourth-largest economy, overtaking Germany, by 2027. It would be even more remarkable as of the four top economies, three are expected to be in the Indo-Pacific by 2027 – China, Japan, and India.

Indian policymakers too have underlined India’s emerging role as the “second most important driver of global growth after China” with India’s growth financed primarily by domestic savings. Compared to 18% for China and 16% for the US, India’s share of global GDP already stands at 7%. This is happening at a time when the global economy has been facing negative headwinds as a result of rising food and energy prices, China’s zero-Covid strategy, and Russia’s senseless war against Ukraine. The Indian economy has continued to be resilient partly because of government intervention and partly because of its unique structure.

Of course, this is not enough and, as has been pointed out by many, India’s per capita income remains far behind nations that are overtaking in economic growth rates. And a sustained policy effort would be needed to ensure that the present trajectory continues and does not merely be seen as a post-Covid bounce. Serious reforms are needed to make India more investor-friendly, particularly at a time when China has run out of favor. As investors seek new venues, Indian policymakers should be bold enough to take advantage of this unique moment in India’s political economy.

This economic trajectory of India also gives India a distinct place in global politics today. There is a reason why the West, despite its differences with India over Ukraine, has continued to substantively engage with New Delhi. In fact, India’s ties with the West have grown significantly amidst all the negative press India has received in the West. Where journalists remain prisoners of their short-term outlooks, policy-makers in the West recognize the real story — the rise of India as a credible geopolitical and geo-economic player in the 21st century.

Even as the courtship with the West continues, India continues to maintain its partnership with Russia. Putin wants to show to the West that, despite Western sanctions, he is not alone. He has the support of big powers like China and India. New Delhi wants to have its channels of communication open with Moscow, given their defense ties as well as regional security convergence.

But also because New Delhi would like to make an effort till the last moment to ensure that the China-Russia axis does not become a fool-proof alliance. The future will be decided by how Russia fares in its war with Ukraine and India will have little control over the outcome but so long as the window is open, New Delhi will continue to make this effort.

China too finds itself in a bind and India’s stiff resistance to its aggressive pursuit along the Line of Actual Control has put paid to the Chinese Communist Party’s narrative that its time has come. India’s standing up to China has ignited a process of broad pushback across the Indo-Pacific and beyond. And with a plethora of domestic challenges being faced by Beijing, there is once again a premium on internal consolidation.

India, as a consequence, finds itself in a “geopolitical sweet spot” that it should make the most of. In the past, New Delhi’s inability to exploit the extant balance of power to its advantage cost it dearly. A prudent nation should be able to identify the opportunities in the existing structure of global politics and shape its external engagement accordingly in the pursuit of its interests. Pursuing unrealistic ideational constructs can often do more damage to a nation’s standing.

For India today, the most serious challenge is the rise of China and how it has managed to constrain India’s options. New Delhi’s first priority in the coming years will be to internally consolidate its capabilities so that it can stand up to Beijing’s nefarious designs on a more sustained basis. This will have to be supplemented by building serious partnerships that are capable of adding value to India’s growth story.

As a large part of the world sours on China, there is a need to become an attractive partner. This will require making some choices — choices that New Delhi has often been shy of making. The basis of these choices should not be to make the world multipolar or enhance any chimerical strategic space. The only basis should be how these choices strengthen India’s long-term capabilities to emerge as a singular player on the global stage in its own right.

India’s G20 Presidency will be aiming to move the world away from polarization towards a greater sense of solidarity. Its own reality of being a multicultural democracy should guide it well in bringing together highly diverse stakeholders to cogitate and act, on global challenges. The theme of G20 India 2023 — Vasudhaiva Kutumbakam: One Earth, One Family, One Future — encapsulates India’s conceptualization of the global order and its own role in it. And New Delhi has shown that it does not dwell merely on rhetoric.

In 2020, as Covid-19 first surged, it insisted on the need for the international community to work together and help those struggling with the least resources, even as developed nations focused inwards, some of them hoarding enough vaccines to inoculate each adult five times over.

The G20 is unique in so far as it brings together the developed and the developing nations to discuss and create solutions to global governance challenges. India can effectively bridge this divide by forging consensus on key global issues. New Delhi has been vociferous in giving voice to the aspirations of the Global South, at a time when few global powers have neither the time or resources to cater to the most vulnerable — occupied as they are with their own domestic woes.

The pressures of global disruption are being absorbed mostly by poorer economies and few powers are willing to consider their challenges with the seriousness they deserve. By hosting one of the highest-profile international gatherings ever at a time of great turbulence, New Delhi is signaling its readiness to think big and deliver big — something that much of the world had long expected from India.

This is an inflection point for the global order and for India. India is on the cusp of achieving something dramatic: Not only a top-tier economic power that is also a multicultural democracy but also a top-tier geo-political player that can lead, not simply balance.

The choices that New Delhi will make over the next few years will define the contours of that rise.

This article was first published in the Dhaka Tribune as Is this India’s moment? on December 21, 2022.

Read more by the author: Indo-Pacific & the New Normal