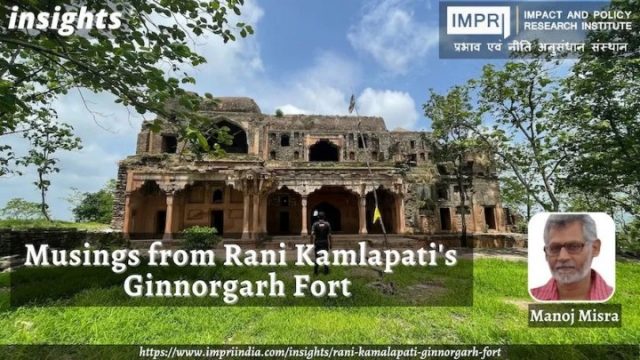 “Sir, when did you retire?” I was tempted to say 15 years ago but held myself back and nodded away the query.

It was the local Range Forest Officer (RFO) who had queried me, presumably bewildered on how a retired person could climb up and down the hill fortress of Ginnorgarh without much effort, while he himself had taken excuse for his none too small built. Sarcasm mixed with admiration was apparent in the query.

Ranger sahib, as was apparent from his body language, had not been too enthused to accompany a retired officer to a long abandoned and rarely visited Gond Rani fortress (Ginnorgarh) falling in his jurisdiction in Sehore district of Madhya Pradesh.

Personally it was like turning the clock back by few decades for my recollection from my previous visit to Delabari (nearest village to the fort) was a Bollywood song (Mere khwabon mein jo aaye…) from yet to become a cult movie DDLJ (Dilwale Dulhania Le Jayenge, 1995) sung by a participant at a Nature Camp for school kids that we had organised there.

I recalled vaguely from my two decades old visit that there was a motorable path through the forest to a point close to the fortress and wondered as to why the RFO had not preferred that over a rather tortuous climb?

The reason, as I soon learnt, was simple. The day of our visit to the Gond Rani fortress was a holiday and also a local festival which must not have endeared the Ranger sahib to the task assigned by the DFO (Divisional Forest Officer). So presuming that I would baulk at the prospect of a difficult climb, which would have resulted in an aborted visit and an early relief for him, is what led to the arduous climb.

Admittedly it was my fault to have planned the visit on a festival and a holiday. On realisation I promptly sought his forgiveness.

For around 300 years beginning 15th till the 18th century, central India (large parts of the present day Madhya Pradesh and Chattisgarh) had strong and powerful Gond (local tribe) kingdoms with at least two famous warrior queens, Rani Durgawati (1524-1564) and Rani Kamlapati (18th century) from that era.

The reign of the Gonds declined with the rise of the Mughal and Maratha power and ultimately the takeover of a large part of the country by the British East India Company.

Ginnorgarh, some 60 km from Bhopal, was the stronghold of Gonds under Rani Kamlapati, which, after her demise, was occupied by Dost Mohammad, the founder Nawab of Bhopal. With the rise of Bhopal, Ginnorgarh lost its preeminent status and was soon consigned to history.

Today it is in ruins, trying hard to retain some semblance of its erstwhile glory. It is spread over some 1,100 m by 250 m isolated hill overlooking the verdant forests of what is now the Ratapani Sanctuary. The fort is not only picturesque but is an architectural marvel too.

This and similar forts atop hills are notable for their water structures, which abound at Ginnorgarh as well.

The Baoris of Ginnorgarh Hill Fort

Our key motivation this time was to look at the state of water structures present in and around the famous fortress. Dr AK Vishwakarma, a noted hydro-geologist and a friend, completed our visiting party.

There are at least nine different baoris (step wells) both atop the hill as well as few spread around at the foothill. While the majority of these and other water structures are fast going to seed, there are at least two of them which are elaborate structures and can be restored with ease.

These baoris carried enough water (although dirty) during the month of our visit (October) signifying that their respective catchments and aquifers stood firm.

But why would anyone want to restore these clearly once glorious artifacts? For one they could be made part of interesting historical attractions for tourists visiting the forest camp at Delabari.

Then the students at the Bhopal-based School of Planning and Architecture (SPA) would find interesting study material here both from the point of view of architecture and water planning as practised in the good old days.

Delabari stands at the water divide between the river Betwa (Ganga basin) founder catchment and the start of the adjoining river Narmada valley. The hill which hosts the Ginnorgarh fort is an outlier of the Vindhyan system with its own geological peculiarities.

As I trekked back to my vehicle parked close to one of the water structures across a stream, a saffron flag caught my attention. Closer look revealed a very interesting engraving of the Shiva family (Lord Shiva, Parvati, Ganesh and perhaps Kartik, too) on a double decked sandstone rock.

How, when and why this was created could not be ascertained although it was clear that the engravings were not of any great vintage. But only an expert can tell with certainty.

A musing as I drove back keeps returning to me often – how many other such sites of historical, geological and cultural importance remain uncared for within our forests?

Archeological Survey of India (ASI) and state department of archeology do have a role to play but their limited financial and human resources are already spread thin over a large number of non forestry sites.

Fortunately, the Madhya Pradesh Forest Department has constituted an Eco-tourism Development Board and one of its tasks in addition to the promotion of eco-tourism could be to map, restore (with expert assistance) and maintain such sites and artifacts lying within our forests. Other forestry establishments in the country could follow suit.

This article was also published in Gaon Connection as The Gond Warrior Queens, a Hill Fort and its Baoris on December 22, 2022

Also Read World’s Oldest and Still Functioning Dam: The Story of Raja Bhoj and its Mandideep ‘Island’ by the author.