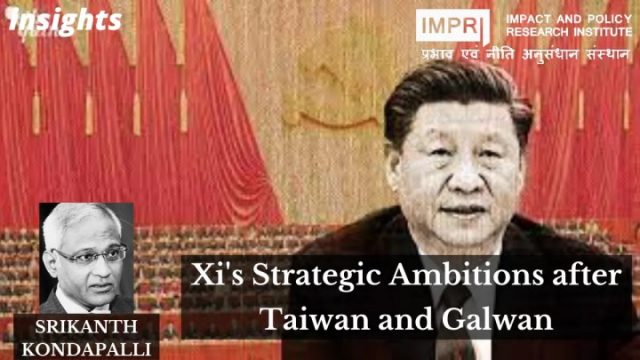 Xi reiterated in work report to safeguard China’s dignity and core interests which has major implications for India.

Intense nationalist rhetoric, aggressive posturing both at the domestic and external front, muscle-flexing on Taiwan and disputed areas, new-found defiance of the existing order from which China benefited in the first place and grandiose plans for ‘rejuvenation’ amidst the spread of the pandemic as well as the Ukraine crisis characterised Xi Jinping’s address to the 20th Communist Party Congress (CCP) on 16 October at Beijing.

Xi read out a nearly two-hour long speech giving a clarion call to the Chinese people to sacrifice further for the growth of the CCP and fulfil its aspirations and “founding mission”. He demanded that they serve the party and the state to observe the coming centennial of the armed forces in 2027 and of the People’s Republic in 2049.

Xi also directed that the country should be prepared to “effectively respond to grave, intricate international developments and a series of immense risks and challenges.”

Many of these are of course, the making of China itself, including the origin and spread of the Covid-19 pandemic and regional assertiveness, even though recent Russian invasion of Ukraine triggered crises in food, fuel and fertilisers besides destruction and rise of a new order.

Xi’s Nationalistic Agendas at the CCP

Xi expressed his satisfaction to the turnaround in Hong Kong after the passing and implementation of the new security law last year that aimed at curbing any dissent. His tone on Taiwan, after the recent Chinese military exercises post US leader Nancy Pelosi’s visit to Taipei, was reminiscent of his previous congress’s “six nos” and the CCP centennial speech of “breaking heads” last July.

Xi called for “a strategic initiative for China’s complete reunification” without ruling out the use of force. Interestingly, he suggests that “China’s issues must be dealt with by Chinese people in the light of the Chinese context.” This is in contrast to the Taiwan President Dr Tsai Ing-wen’s position that issues of Taiwan should be decided by the Taiwanese.

This is at a time when the recent official assessments suggest to a weakening of the US influence, China’s bourgeoning trade and investments with the US and other countries, despite the recent tariff wars and semiconductor ban.

Such an assessment also hides China’s assertive posturing towards Senkaku islands, South China Sea disputes and aggressiveness on the India-China border areas. Significantly, in an assertive stance, Xi suggested to evolving “mechanisms for countering foreign sanctions, interference, and long-arm jurisdiction will be strengthened.”

Another significant takeaway from Xi’s speech is on building a “peaceful China” through the support of the country’s armed forces and the national security establishment.

Xi’s most pungent attack was surprisingly on the domestic political factional rivals within the CCP. Many of them he demolished through the sectarian and relentless anti-corruption campaign unleashed on the 1.5 million “tigers,” “flies,” and “foxes,” while protecting his flock.

Xi castigated some “vested interests” among CCP members as “sliding toward weak, hollow and watered-down Party leadership in practice”. Xi lambasted: “Despite repeated warnings, pointless formalities, bureaucratism, hedonism, and extravagance persisted in some localities and departments. Privilege-seeking mindsets and practices posed a serious problem, and some deeply shocking cases of corruption had been uncovered.”

Xi also was scathing on those party members who are with “misguided patterns of thinking such as money worship, hedonism, egocentricity, and historical nihilism were common, and online discourse was rife with disorder.” In general, to reduce the influence of previous leaders like Jiang Zemin and Hu Jintao, Xi has to denigrate them in order to prop his own “New Zhijiang Army” followers since his provincial sting nearly two decades ago.

Xi alludes to a “people run the country” approach However, no clear institutionalised structures nor procedures were mentioned and thus remains rhetorical in nature. There were village level elections conducted for the past few years but the CCP organisational structure is above that level – at the county. Currently, the 20th CCP is being held by 2,296 deputies who were selected by 96 million cadres and not by 1.47 billion people.

India-China Equations at the CCP

While India was not mentioned in the work report presented by Xi, five broad areas could be noticed. Firstly, Xi’s assertion that “momentous changes of a like not seen in a century are accelerating across the world” and that “significant shift is taking place in the international balance of power, presenting China with strategic opportunities” suggest to two possibilities for India – one of tentative collaboration with India and other states in multipolarity phenomena such as in the BRICS, SCO and other platforms, specifically in renminbi internationalisation process and opposing the US or the risk of intensifying conflict on the borders and in the Indian Ocean region.

Secondly, related to the above, Xi reiterated in the work report to the PLA modernisation and to “safeguard China’s dignity and core interests”. This has major implications for India as with other countries.  Xi’s speech had an estimated mention of 73 times of security and protecting national security.

This article was first published in The Quint as Xi’s Forward Plan: After Taiwan, Galwan, Where Would the Buck Stop for China? on October 18, 2022.