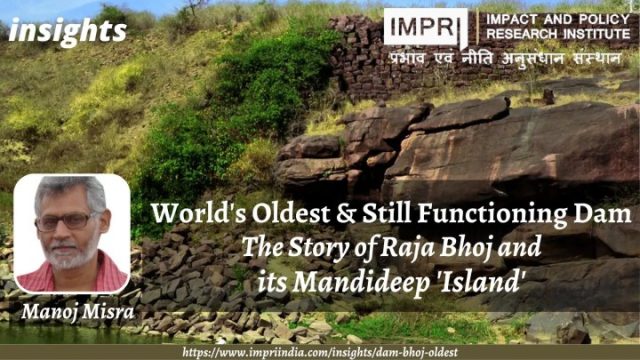 Mandi deep (originally dweep, an island) is today a bustling industrial hub, a few kilometres from Bhopal on the Bhopal-Hoshangabad road. While it clearly is at an elevation pronouncedly higher than its surrounds, its name, which is a combination of Mandi (market place) and Dweep (island), appears incongruous.

Except for a few small sized streams skirting it, there is hardly any water body of significance anywhere near Mandi deep to merit its ‘island’ status. So how did its name originate?

To unravel the mystery we need to go back in time. Some 1,000 years actually!

Twenty five kilometres south east of Bhopal (capital city of Madhya Pradesh) and few kilometres downstream of Mandi deep is the ancient township of Bhojpur (after Raja Bhoj) straddling an outlier of the Vidhyan system where river Betwa enters a gorge having collected the tributes from its nine founder streams namely Kaliasot, Kerwa, Bangna, Segru, Bansi, Jamni, Godar, Gerwa and Ajnar (see map 1). It runs down the hill slopes of a valley that uncannily resembles the famous Hindi word ‘Om’— ॐ

Bhojpur is most famous for the grandeur of its ‘incomplete’ Shiva temple, a few Jain temples and a popular mela held here on Mahashivratri. What it sadly is not so much known for is a 1,000 year old ‘still serving’ boulder dam over which a visitor to Bhojpur motors, little realising the wondrous history she/he is zooming over.

The temple is a marvel. Standing tall with one of the biggest lingas in the land, it is a monument of outstanding craftsmanship and architectural ingenuity of its creator, Raja Bhoj. Its ‘incomplete’ status points to the fact that Raja Bhoj perhaps died while it was still under construction.

But this tale is less about the temple and more about the dam/s and an astounding lake that got created to last for almost 400 years before it was forcibly drained out by breaking open the main dam.

Lake Hom dam (14th century) in Syria is reputedly the oldest surviving dam in the world. This claim is misplaced because the dams built in Bhopal in the 11th century, which still service sans any major reworking, are older but poorly appreciated or known, even by many in Bhopal.

Legends have it that Raja Bhoj (reign: 1010 – 1055 CE), one of the most illustrious (warrior as well as poet and architect) king of the Parmar dynasty who ruled over the Malwa region in western Madhya Pradesh with his capital at Dhar, was stricken with a serious disease (reportedly leprosy) that defied a cure.

Then a monk prophesied that the King would die unless he takes bath in a lake that is fed by 365 streams and springs. Such a location for the creation of a lake was ultimately found after a great search within the Vindhyan valley constituting the headwaters of river Betwa but it had only 359 streams.

The problem was solved by a local Gond chief named Kalia who suggested the redirection of a stream to meet Betwa appropriately. The stream later came to be called Kaliasot. For the stream to carry enough water, a dam was created over another stream called Kolans whose sluice (Bhadbhada) interestingly in its back waters was made to overflow into the Kaliasot.

The dam on Kolans is what caused the famous and conspicuous large lake (Bhojtaal, also called the upper lake) around which the city of Bhopal later took shape.

The huge lake (called ‘the great Bhojpur Lake’), which cured Raja Bhoj, was created by damming Betwa at Bhojpur. Another dam was created nearby to divert Kaliasot into Betwa upstream of the main dam.

As Raja Bhoj went about constructing the majestic Shiva Temple at Bhojpur, it must have provided him an unforgettable view of the vast expanse of the waters of the great Bhojpur Lake, its islands and the hills beyond the lake.

The great Bhojpur Lake was drained out some 400 years later by Hoshang Shah, the Sultan of Malwa by getting the main dam destroyed in 1434 CE. This he did to favour a few merchants who were discomforted by hooligans taking refuge in the lake’s islands after harassing and assaulting them.

Discovery of the dams

I had first made a hurried visit to Bhojpur in the 1990s primarily for the temple. It was only in September 2017 that I discovered the dams for myself during a leisurely visit. And what a discovery it was? It left me wonderstruck to find a fully functional dam of expertly dressed and weaved red sandstone boulders (cyclopean masonry) without any sealing material whatsoever.

Over a kilometre long it was meant to redirect the course of Kaliasot whose original course could still be deciphered downstream of the dam.

One marvelled at the engineering ingenuity and confidence in such a dam’s ability to withstand the force of water. Much later I learnt that it had taken almost three months for the soldiers of Hoshang Shah to break open the main dam on Betwa and drain out the great Bhojpur Lake which itself took three long years.

Today the Betwa at the mouth of the gorge is but an apology of a river ferrying largely in non monsoon months the polluted effluents of industries at Mandideep and the untreated sewage from parts of poorly planned ‘sprawl’ called Bhopal.

It is well known that the present day Bhopal was found in early 18th century by a Pashtun mercenary, Dost Mohammad Khan (1660-1726) who usurped after her death the territories held by a Gond queen, Kamlapati who had asked him for help.

Bhopal on the shores of the Bhojtaal was then just a village. So Bhojtaal was well in place when Dost Mohammad Khan established the city of Bhopal. It is claimed that the fame of Bhojtaal was widespread courtesy the couplet, “Taal ho to Bhopal taal, sab dusre talya”, meaning that “if there be a lake, it is Bhopal lake, all others are ponds”.

But the belief is that the said couplet actually alluded to the much larger great Bhojpur Lake and not to the present day Bhojtaal which at 30 square kilometres (sq km) water spread is no match to 400 plus sq km of the great Bhojpur Lake.

The legend of the great Bhojpur Lake as narrated above is first mentioned in 1888 by one W. Kincaid, a British explorer at page 348-352 of the Vol. XVII of the Indian Antiquary, a Journal of Oriental Research. Titled ‘Rambles among ruins in Central India’ it carries amongst other things the story of Raja Bhoj, his disease and formation of various dams and the lakes including the redirection of the Kaliasot River.

Interestingly, between 2005 and 2008 a Department of Science and Technology funded study led by Dr AK Vishwakarma at the MP Water and Land Management Institute (WALMI), Bhopal made a detailed geo-hydro-environmental investigation of the land in the so called Om valley to scientifically validate the legend of the great Bhojpur lake, called ‘old Bhojtaal’ by them (see map 2).

According to them, “The core of all the dams were constructed by boulders and it was covered by black cotton soil puddle overlain by oversize stones and morrum blended with soil. Both the sides of the dams were constructed by stone pitching. Pitching is vertical and locking is horizontal. Big blocks of sandstone were placed interlocking each other tightly. Sandstone blocks were placed in such a way that they were sloping towards the inner part of the dam. The dams were made slightly circular to avoid the application of direct force of the waves of old Bhojtaal”.

Their research has confirmed that the vast lake spread over some 421 sq km had indeed existed and that there had been five islands in the lake of which Mandideep was in the centre.

This article was first published at Gaon Connection as Raja Bhoj, the great Bhojpur lake and its Mandideep ‘island’ on August 10, 2022.

Read another piece by Manoj Misra on Can Compensatory Afforestation cure all woes? in IMPRI insights.