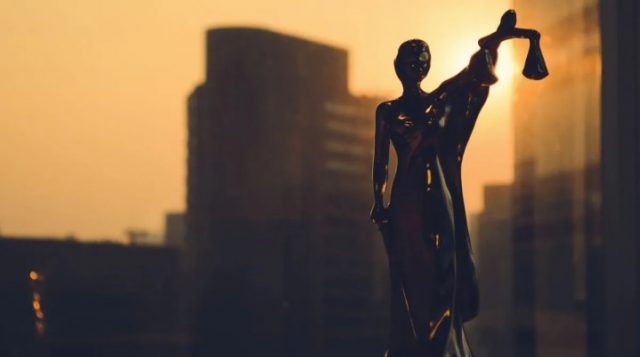 The three-day immersive online legal awareness and certificate training programme on “Women’s Rights, Laws and Policies in India”, organised by IMPRI Gender Impact Studies Center (GISC), IMPRI Impact and Policy Research Institute, New Delhi took place on September 1, 2022 to September 3, 2022. The event was chaired by Prof Vibhuti Patel . Inaugurating the session Ms Tripta Behera, a researcher at IMPRI, welcomed the speakers and participants to the program with an introduction to the eminent panellists.

Commencing the program, the chair for the session, Prof Vibhuti Patel gave a brief about the legal safeguards and affirmative actions for women in the Indian state based on two routes, Judicial and Legislative route, through which India has asserted women’s rights. Further adding to it, she talked about India’s role in shaping the national and international policies for women’s rights and how the Indian parliament adopted the Women Empowerment policy in 2001 and committed to Millennium Development Goals and Sustainable Development Goals backed by women’s rights.

She pointed out the fact that the initial fight for women’s rights was initiated by men but with time women came to the forefront to fight for their own rights. All in all, she emphasised the indispensable role of the women’s movements in the formulation of laws, policies and institutional reforms to promote equality and inclusiveness. After this, Adv Sanchita Ain shared the presentation on ‘The Rights of Survivors of Sexual Violence under Criminal Law’. She explained, in detail the process, the procedures and the provisions that the women are entitled to but are generally unaware of. She emphasised the importance of counselling after situations of sexual assault/violence as the victim needs psychological, medical and legal support.

She went further to explain the rights and process while undergoing examination, filing the FIR, the investigation procedure and the compensation for the victim. This was an enlightening session that made women aware of their rights and gave them a new perspective on thinking the way they are conditioned by society. The comprehensive presentation by Prof Vishal Narain focused on gender relations in the context of Natural Resource Management with emphasis on water management in which he has done extensive research. He started off by explaining the difference between gender and sex and how gender is a social construct defined by the norms of State law, religion and social practices.

He further explained the different relationships that men and women have with natural resources based on these norms which need to be changed. He also brought light to the dimension of intersectionality between gender and caste and how it changes access to resources. He observed that gender norms are more fluid in the low-class groups than in the high-class groups. This subtle link between gender and natural resource management was very well brought up and explained by Prof Narain.

Day 2 of the program included eminent panellists Adv Dr Albertina Almeida, Lawyer and Human Rights Activist, Goa; Dr Amar Jesani, Independent Researcher and Teacher (Bioethics and Public Health), Editor, Indian Journal of Medical Ethics, and Adv Dr Shalu Nigam, Advocate, Author, and Researcher, Gender and Human Rights. Starting with the session, Prof Vibhuti Patel gave a brief recap of the topics covered during the seminars on Day 1. She also provided an overview of the topics to be discussed on Day 2 of the workshop. Dr Albertina elaborated on how we should understand and use laws pertaining to sexual harassment in the workplace.

She started by explaining the historical context of the laws pertaining to sexual harassment in the workplace, through examples of cases such as the Bhanwari Devi case, Vishakha guidelines and the Nirbhaya case among others. She explained how each of these cases had different perspectives to offer on the issue. She further talked about the Sexual Harassment of Women at Workplace (Prevention, Prohibition and Redressal) Act, 2013 and highlighted key concepts as defined by the law. She explained the major aspects of this piece of legislation and concluded with a few of its limitations. Dr Amar kicked off his presentation on ‘Abortion: Law and Ethics’ by defining the key concepts of morality and ethics.

He delved into the historical trajectory of the issue and its relation to the medical profession as well as law. Further, he explained the differences between the conservative, liberal and moderate positions on abortion and elaborated on how abortion can be or not be viewed as a woman’s right. To conclude, he discussed a few challenges and dilemmas pertaining to the issue at hand. His lecture comprehensively covered the topic of abortion from ethical, legal as well as medical perspectives. Dr Shalu in her presentation talked about how the conservative patriarchal family ideology operates and is challenged in the courts. 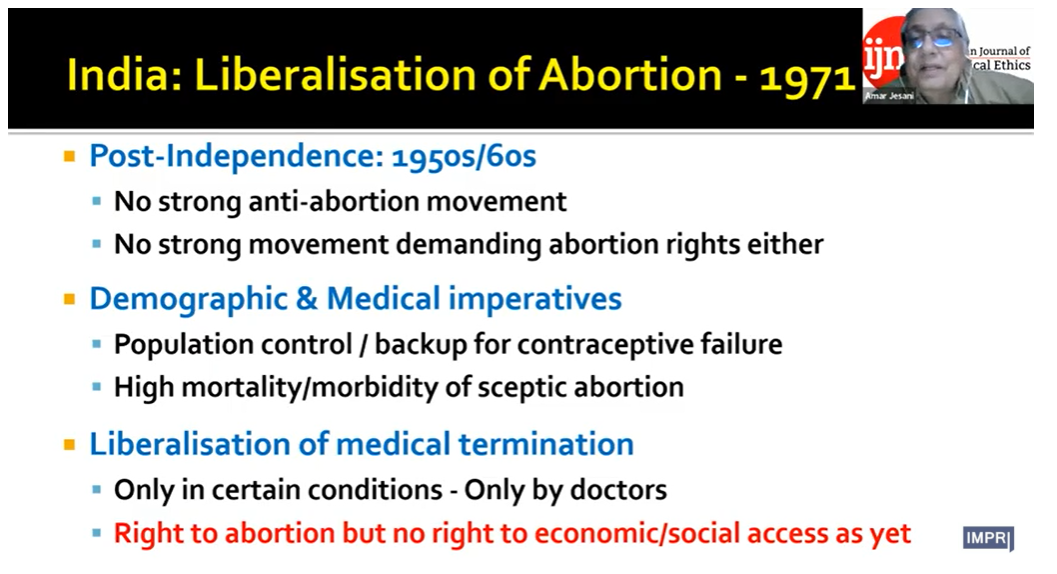 She started her presentation with the concept of domestic violence, the concept itself and its various dimensions. She further talked about the law pertaining to domestic violence and the international framework around it. She moved on to how the issue is dealt with within the courts and gives rise to a ‘clash of ideologies’. She concluded by emphasizing the need for courts to adapt to the changing circumstances and aspirations of the new generation of women who are no longer seeking masters, but rather partners.

Day 3 of the program included eminent panellists Prof Bijayalaxmi Nanda, Principal, and Professor of Political Science, Miranda House, University of Delhi, Ms Urvashi Prasad, Director, Development Monitoring and Evaluation Office, NITI Aayog and Dr Nivedita Haran, Former Additional Chief Secretary, Government of Kerala. Kickstarting the session, Prof Patel gave an overview of the previous days and shared the themes for Day 3. Prof Bijayalaxmi in her lecture talked about the Pre-Conception and Pre-Natal Diagnostic Techniques Act, of 1994 and its role in countering gender discrimination. She started with some important trends regarding the sex ratio and what those trends mean. She highlighted the role played by womens’ movements in India in dealing with issues such as female foeticide and infanticide.

She also talked in detail about policy responses that can help deal with the issue of sex ratio imbalance. She concluded with how three are important in empowering women – Assets, Agency and Age Security. Ms Urvashi Prasad gave valuable insights regarding the gender policy framework in India and the challenges that need to be addressed. She gave a detailed description of the four broad areas of policy framework including Women’s Labour Force Participation Policies, Education Policies, Health and Nutrition Policies and Policies related to Women’s Safety Issues. She elaborated on the existing policies and stated that although governmental policy plays an enabling role in implementing these policies it cannot be effective in isolation and thus, needs participation from the private sector and society.

She stated that the lower participation rate of women in the labour market is the result of societal attitudes towards women. She also talked about the changing focus of policies in the education sector towards lowering the dropout rate of girl children from secondary and higher secondary education. She further stated the need not to view women’s health requirements as just limited to childbearing but also to give importance to non-communicable diseases and mental health problems in women. While concluding her talk, she emphasised the need for effective allocation and use of funds and the simultaneous participation by the private sector and society with the government for these policies to work in an efficient way.

Dr Nivedita Haran commenced with her presentation on the perspectives on legal challenges for women in bureaucracy by talking about the need for such legal rights as the number of women coming out of homes to enter the workplaces rises at a time when with technological advancement newer ways of sexual harassment cases are also on the rise with cyber-crimes gaining the centre stage. Her discussion was mainly based on the challenges faced by women employees from grade 3 or 4 levels in the government offices like personal assistants or secretaries who are not vociferous about the situations they face in the workplaces because of the prevalence of the political power hierarchies. She narrated two instances that she encountered while working in a government office as an IAS officer and while in the office of the United Nations.

She also talked about the formulation of the POSH Act 2013 as an aftermath of the Vishakha judgement. Closing the 3-Day informative session, the chair, Prof Vibhuti Patel gave her concluding remarks and thanked all the eminent panellists. She underlined many essential points that had been brought up by Nivedita Haran and stressed the need for women employees to come out with complete facts rather than ignoring workplace harassment just because of the power dynamics. She mentioned the important learnings and points that all nine sessions brought together and the need for the right perspective-building in the context of gender equality. In her powerful concluding remarks, she said, “ Knowledge empowers but the use of knowledge for gender equality brings social transformation.” The training program ended with a vote of thanks by Dr Suravie Ghimiray, IMPRI on behalf of IMPRI Gender Impact Studies Center (GISD).

Acknowledgement: Vithita Jha and Fiza Mahajan are the research interns at IMPRI.

Youtube Videos for Women’s Rights, Laws and Policies in India