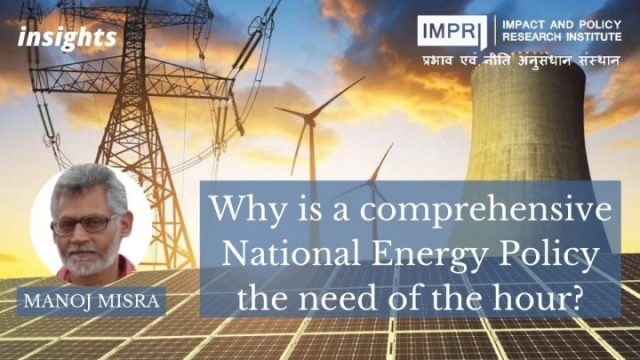 The IPCC recent report (Group III on Climate Change Mitigation) has been categorical to state unless we humans downsize our energy needs, which means take a conscious break from our relentless pursuit of economic growth and consumption patterns, we should forget the relatively safe target of 1.5 degree C rise in global average temperatures over the 1850 levels and start preparing for the consequences of a 2 degree C rise, if not more.

This is when at 1.17 degree C the world has already started to experience never before adverse impacts of climate change (CC) in the form of unprecedented heat waves, floods, fires and melting of ice at the poles. CC refugees are still a trickle but could become a flood in no time. According to reports sea level rise in parts of the US has already begun to make its presence felt.

It is not without reason that the current decade of 2020s is called the make or break decade for life on earth and the UN Secretary-General António Guterres has not minced his words in “We are on a pathway to global warming of more than double the 1.5°C limit agreed in Paris. Some Government and business leaders are saying one thing, but doing another. Simply put, they are lying.  And the results will be catastrophic. This is a climate emergency.…..”

Sun, our star, is its primordial source, within which hydrogen atoms fuse to form helium atoms and release radiations of varying frequencies which fill the entire solar system including the earth with both useful and harmful versions of them. Food, amongst many others is solar energy’s useful form and moves within the food-web beginning with plants that have the wherewithal to convert sun’s energy into food for self and transfer it in turn to other life forms including humans that consume them.

We humans using superior brain power have outdone the sun as the only source of available energy and started to use first firewood (Heat and cooking) then inflammable natural oils (light and heat) and later fossil fuels like coal, petroleum and gas to meet their varied energy needs. In parts of the world where good wind blows and water runs down a gradient with force, both wind and water came to be used as a motive force to grind grain and attend to other small energy needs.

Burning coal to convert water into steam for use as a propellant engendered the industrial revolution in the eighteenth century.

Steam locomotion turned horsepower into history. But once Michael Faraday invented the electric dynamo in 1831 and electricity became the standard source of energy for lighting, heating, transport and industrial activity then fossil fuels (coal, gas, diesel etc) and hydropower came to be harnessed on large scale for its production.

Post the Second World War, nuclear power (fission) used initially for destruction during the war became the peacetime fuel for production of steam to move the turbines for production of electricity. In recent decades technological developments have enabled humans to turn to both wind and sun to generate affordable electricity at scale.

Science has established beyond doubt that use of fossil fuels (coal, petroleum, gas etc) for the production of energy; related industrial activities and some lifestyle choices have added so much carbon dioxide and other gases together called the GHG (greenhouse gases) into the atmosphere that resulting global warming due to ‘greenhouse effect’ has already begun to make life on earth difficult due to extreme weather events.

So there is now a global call to resort to sources of energy that add no greenhouse gas into the atmosphere and which are also not exhaustible unlike the fossil fuels which have a finite life span.

These climate ‘safe’ and ‘renewable’ sources of energy have primarily been identified as solar and wind. Some people include water, biomass, nuclear (fission) and hydrogen in the list ignoring their serious adverse impacts on natural ecosystems like oceans, rivers, forests, soils and generation of dangerous wastes (nuclear). Even large scale solar and wind are not without their adverse environmental impacts.

So while there is a general consensus that fossil fuels must remain where they currently are, namely the underground, there is still not much awareness about the pros and cons of the so called ‘renewables’.

This is an attempt (in a series of articles) to demystify these ‘renewables’ one by one, while reiterating that this in no way be seen as carrying any brief for continuing fossil fuel extraction or use. Recent clarification issued on IPCC Group III report’s misleading wording has made it amply clear that globally the emission of GHGs should have already peaked sometime in 2020 and the timeline for it is not 2025 as initially made to believe and lapped up by few nations still keen to use incrementally the dirty (read coal) fuel.

But much before even all that it is paramount to address two basic questions. How much electricity do we as individuals of presumably intelligent species really require for leading a reasonably comfortable but environmentally friendly life?

And are we utilizing at optimum efficiency all the energy that we are currently producing? Or do we continue to put the cart before the horse by not only ignoring these fundamental questions but focusing only on the supply and not the demand and efficient side of energy use?

Closer home, in the words of Shankar Sharma, an energy expert and perhaps the sanest voice on energy front in the country, the first thing that India needs is a diligently prepared ‘national energy policy’ which remains elusive till date and in absence of which we as a nation quite paradoxically continue to invest on ‘new’ fossil fuel based power plants while claiming a power ‘surplus’ national status?

This article was first published in The Dialogue as India Needs A ‘National Energy Policy’ on 19 April 2022.

Miyawaki technique of planting is unnatural, avoid its indiscriminate use| 17 April 2022

Why Does The Forest Survey Disappoint Everyone, Except Forest Ministry?| 24 January 2022