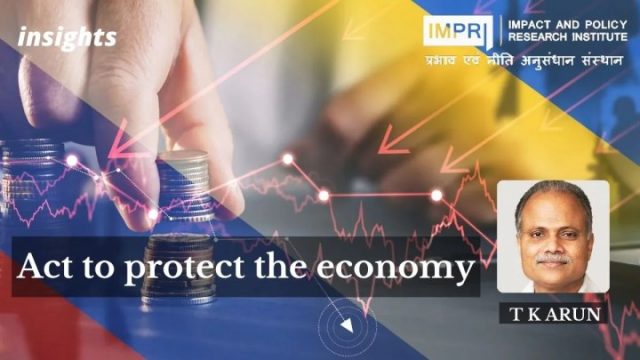 As curtain-raisers to the International Monetary Fund’s Spring Meet and the latest World Economic Outlook warn of global growth taking a hit of 0.35 percentage point purely on account of the rise in uncertainty, emerging markets face the prospect of their rate of growth being reduced by at least 0.4 percentage point for every 10 per cent rise in oil prices. And crude prices have gone up by a quarter since January, meaning growth takes a hit of one percentage point purely on that count. Then, there is other inflation, in metal, food and fertiliser prices, thanks to the war in Ukraine. Russia and Ukraine are two of the largest exporters of wheat in the world.

Then, there are other risks: supply disruptions in lockdown-prone China and forebodings of the global economy fragmenting into geopolitical blocs, via financial sanctions that many comply with, techno-nationalism and the tendency for worry over just-in-case to dominate over the temptations of low-cost, just-in-time globalised supply chains. COVID is rising its head yet again. India must gear up to protect growth in this challenging environment.

The first thing to do is to put an end to the ongoing descent into civil strife. Petty politicians vie to feed sectarian hatred. The police not only fail to take preventive action, but also play partisan, when enforcing peace or rounding up the offenders. Administrations mow down the property of arbitrarily identified ‘rioters’, making a mockery of the Constitution’s guarantee to every citizen of the due process of the law. These not just harm the direct victims, but also unravel assorted ties and commitments that enable people to function coherently.

When might is right, only cronies of the state can flourish, the rest can be crushed or bought over by the cronies. A dysfunctional legal system further aggravates the difficulty of doing business. Access to foreign direct investment will be restricted to either ends of the spectrum of businesses: giant cronies at one end and new start-ups at the other. Foreigners would be too scared to invest anywhere else, even as they salivate over the size of the Indian market – actual and potential.

Leaders of the ruling party and the political executive must appreciate that a global economic emergency is gathering pace and that it cannot be business as usual anymore. They must cry halt, and call back their dogs of war wreaking havoc across the country. Then the government must act to shield the economy from war and pestilence.

The new variants of COVID making their presence felt are eminently amenable to treatment, especially by Pfizer’s Paxlovid, in combination with an older anti-viral, ritonavir. Pfizer, shamed by its obscene profits from its vaccine supplies during the pandemic, has offered the know-how for Paxlovid to UN-backed Medicines Patent Pool, which has licensed, royalty-free, dozens of drug manufacturers around the world to produce the drug. India has a fair share of these licensees. The trick is to ensure they will produce the medicine on a large enough scale and distribute it, and that medical stores would store enough of it across the country.

This is not easy, given COVID’s retreat. Why risk capital in producing a drug that might not be needed, after all, at least not in large quantities? Why should stockists and distributors take these antivirals on? Why should local drug stores order supplies and store them? Relying upon entrepreneurial risk-taking to guard the economy against devastating shutdowns is not sense. The government must place large orders for both antivirals and use the drug companies’ own distribution network to push enough supplies to every district. The medical community must be advised to prescribe the medicine, rather than hospitalisation, to COVID patients.

The government’s big spending plans, with a big boost to capital expenditure from the Budget, gain additional salience. The government must step up both its own direct investment and investment by state-owned companies, inducing greater investment, in response, by the private sector.

Given the rise in inflation, well above the parliamentary mandate’s upper bound of 6 per cent that the RBI seeks to enforce, should the government not worry about big spending plans based on a larger fiscal deficit? Global uncertainty dampens private sector enthusiasm for fresh investment. This potentially frees up savings that the government can mop up without creating macroeconomic stress. The RBI’s stockpile of foreign exchange is still upwards of $600 billion. Sound management by the RBI can maintain reasonable macroeconomic balance even when the government steps up its borrowings. Ignore the outraged outbursts of inflation alarmists, who do not distinguish between supply-disruption-induced inflation and inflation created by excess demand.

Sectoral action is easy, once macroeconomic stability is assured.

The world will face a food crunch over the next couple of years, at the least. Fertiliser and fertiliser ingredient supplies from Russia have been disrupted. Sowing and farmland have been laid to waste in Ukraine. India has finally got a chance to turn its surplus grain stocks into an economic asset, rather than a liability. Companies like ITC have been stepping up wheat exports. To sustain this, India needs policy action.

Fertiliser use must be rationalised and supplies enhanced. The subsidy regime is a major hindrance: farmers use more of the more heavily subsidised fertiliser, urea, while skimping on the rest. Delayed state payment of the subsidy amount hampers the fertiliser producers’ ability to respond to shortages. It is time to dismantle fertiliser subsidy and roll the amount into income support for farmers. This will reduce water and power use for excess irrigation as well.

Fresh fertiliser capacity should be created in the United Arab Emirates, where both the feedstock and energy are available way cheaper than in India. This would be one way to leverage the new Comprehensive Economic Partnership Agreement signed with the Gulf nation. Will this not deprive India of potential jobs? Come on, who do you think will man the fertiliser plants in the Emirates?

More spending on energy to be self-reliant

India must invest heavily in its energy sector, to reduce external dependence and remove internal bottlenecks. The measures required range from large investment in transmission capacity, the political will to ask consumers to pay for the power they consume, instead of building the expectation that power need not be paid for, and switching from gas, derived from imports, as the primary smokeless cooking fuel to electricity, sourced from domestic coal, whose supplies need to be greatly enhanced, and use, cleaned up, to reduce its carbon footprint.

We need new towns, which call for not so much state spending as planning, zoning and removal of legal impediments for private developers to move in. Regulation must ensure new urban spaces that are energy-efficient, preclude build-up of heat islands, reduce commutes, rely on public transport, eliminate communally segmented ghettos, have open spaces for children and adults to play and have elected local self-government with the mandate to generate revenue from appropriate levels of property tax.

There is much the government can and must do to protect the Indian economy and Indians from the ravages of war and global disruption. It must show the imagination and the will.

This article was first published in The Federal as India must act fast to protect economy from global fallout of war on 19 April 2022.